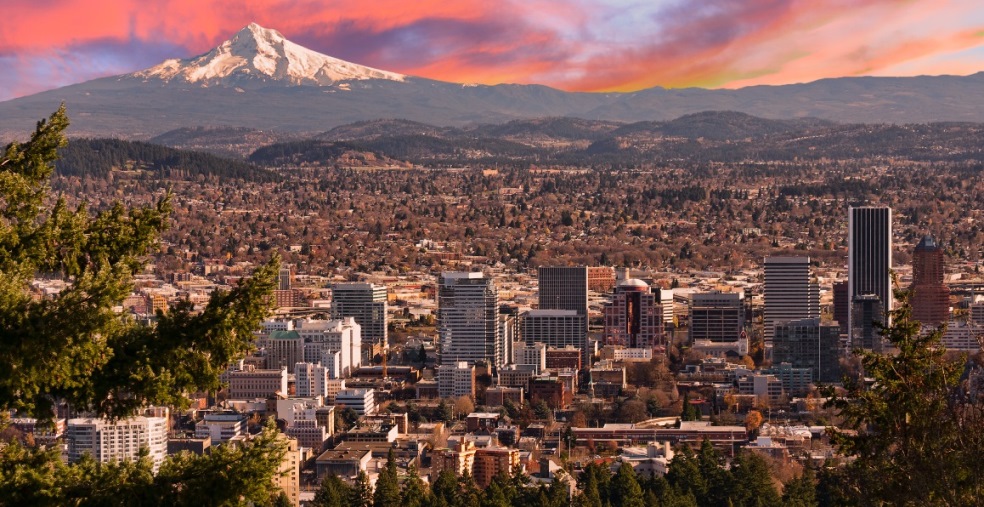 The city of Portland, Oregon is a leader in managing stormwater runoff via green infrastructure. Nearly 20 years ago, the city began a serious effort to adopt green infrastructure—such as pervious surfaces, bioswales, vegetated infiltration galleries, and other methods of handling urban runoff—rather than sending it directly from impervious, developed surfaces into grey infrastructure such as pipes and constructed treatment facilities.

Current city policies and criteria for new development and street improvements prioritize green infrastructure in a variety of ways. The city’s 2016 Stormwater Management Manual requires developers to manage runoff onsite through permeability, infiltration, and vegetative filtering, if at all possible. In turn, those practices minimize offsite discharge, reducing the load on the aging grey stormwater conveyance system and also reducing treatment costs.

Portland’s Green Streets Policy requires green street facilities such as swales to be included in every city-funded street improvement project. If for some reason green facilities cannot be added on site, either an off-site project or a contribution to a “% for Green” fund is required.

Although many people like to see the little spots of green, I have also heard plenty of people gripe about green infrastructure. They complain when a bioswale displaces a traffic lane or parking spaces—and scoff about whether the benefits justify the costs. Portland monitors representative individual projects to determine their effectiveness on a variety of metrics, but I have not been able to find any comprehensive cost/benefit assessments of the city’s green infrastructure.

However, Portland and others promoting green infrastructure projects could get help from some emerging technologies. Stanford University‘s Natural Capital Project (“NatCap”) is developing a suite of software and modeling tools “to enable communities to better identify and quantify the diversity of benefits related to green infrastructure….” The tools are focused not only on identifying the benefits from reducing the quantity of runoff, but also on evaluating how to maximize improvements in water quality.

For instance, NatCap is looking at how small changes in individual projects—such as changing the material used in infiltration galleries—can lead to large improvements in water quality throughout a watershed. Additionally, the group is working on multi-objective assessments for evaluating and comparing the wide variety of benefits that green infrastructure projects provide—including everything from carbon sequestration to social and environmental justice improvements.

Finally, Stanford researchers are also developing peer-to-peer learning tools to improve the connections among green infrastructure developers all over the country to help overcome information, funding, and scalability barriers to such projects.

So, is there an app for green infrastructure? I’m not an intellectual property lawyer, but I know that Apple has trademarked the obvious answer to that question, so I will just say, “yes, there is!”

This article by Janet Neumann of Tonkon Torp, LLP originally appeared on the JD Supra website. Reprinted here (with minor edits) by permission.