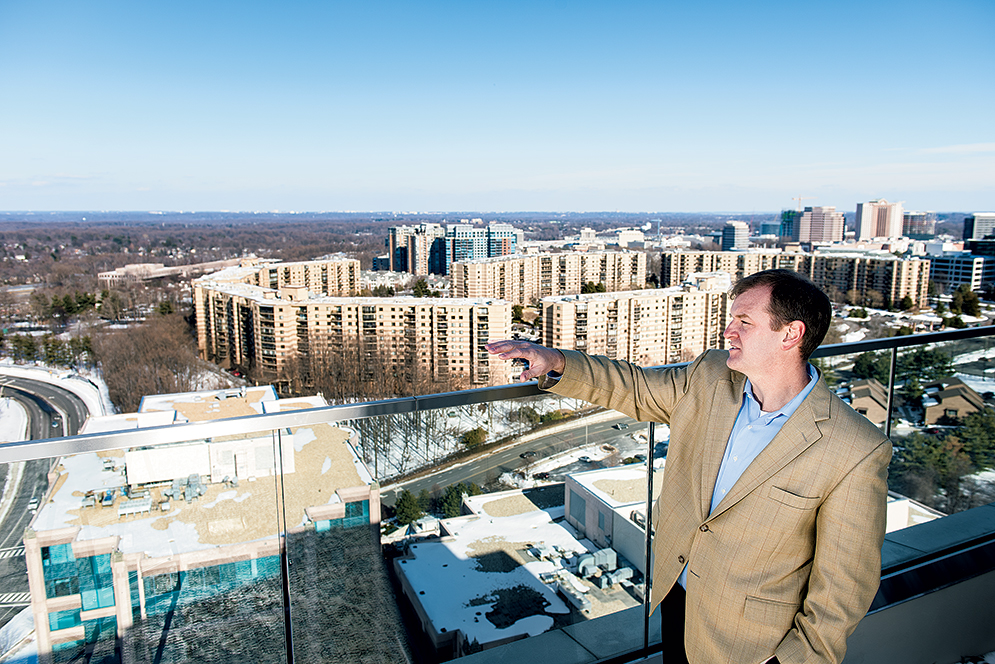 Tysons Corner in Fairfax County, Virginia is a 4.3-square-mile tangle of parking lots and office parks. It’s long been considered one of the least habitable parts of the metro Washington, DC area.

Until now. Maybe. “This is the difference between what’s been done in Tysons,” says developer Aaron Georgelas, “and what will be done in Tysons.”

Thanks to shopping malls and federal contracting dollars, Tysons Corner exploded from an empty cow field in the 1960s to America’s 12th-largest employment center in 2008. Along the way, it attracted Fortune 500 companies and some 120,000 total employees, becoming a textbook example of what’s known as an “edge city,” a concentration of business activity outside of a traditional downtown.

But all this growth created so much congestion that by the early 2000s, it became clear Tysons wouldn’t survive if it didn’t transform itself from a car-clogged commuter drop zone into a vibrant, livable city. County officials launched a sweeping initiative and drafted an urbanization plan defined by walkable city centers, seamlessly integrated public transportation, and acres of parkland.

“The redevelopment of Tysons is the most important urban redevelopment in the country, possibly in the world,” says Christopher Leinberger, a professor at George Washington University and a senior fellow in the Brookings Institution’s Metropolitan Policy Program. “If they do this right, it’ll be the model. Just as it was the model of edge cities, it will be the model of the urbanization of the suburbs. It’s that big.”

[Note from Storm] The title question of whether the process of undoing bad urban planning could be considered a growth industry came from me, not from this article. I think a strong case could be made for it. It’s not just urban planneing, either: Billions of dollars are being spent–with far more to come–in bringing rivers, streams, and fisheries back to life after over a century of their being choked and murdered by civil engineers, particularly the U.S. Army Corps of Engineers. But let’s get back to the subject of this article. The unwalkable, traffic-choked, incompetently-planned mess that of Fairfax County’s Tyson Corner looks even dumber when compared to it’s intelligent neighbor, Arlington County, where I’ve lived for about a quarter of a century. Most of these benefits come from wise decisions made decades ago, though. My perception is that the Arlington County Board has been riding those coattails for the past decade. Today, heritage preservation, affordable housing, and good planning seem to be in short supply.]

Today, Arlington has more office space than downtown Dallas, as well as the country’s highest concentration of 24-to-34-year-olds. Despite all this growth, the county’s figures show that traffic has actually declined—by as much as 23 percent on some key thoroughfares—because 40 percent of those living in Arlington’s urban corridors take public transportation to work.

When the Tysons task force came up with such an ambitious development plan, what exactly was it figuring would fuel the explosive growth the plan depended on? Their predictions were underpinned by two fundamental assumptions. First, that the Washington area’s economic engine would remain vigorous well into the future, creating nearly 75 percent more jobs—about 2.4 million—by 2050. And second, that Tysons would attract an outsize portion of these jobs. But Tysons isn’t attracting residential interest at the rate everyone hoped for.

There’s one key handicap Tysons still must remedy: its utter unfriendliness to the very pedestrians who are so crucial to its growth plan. Take the crosswalk situation. According to Navid Roshan-Afshar, a civil engineer who runs a blog about the buildup of Tysons, you’re rarely more than 200 feet from a crosswalk in DC, but in Tysons, you’re often some 1,000 feet from one, meaning you have to walk six or eight minutes on a “superblock” to cross the street. What’s more, the crosswalks that do exist are death-defying. They span up to ten lanes of traffic and pit pedestrians against late-for-work commuters coming from every direction. Another problem: The walk signs “only last 20 seconds,” Roshan-Afshar says. “I’m an able-bodied 30-year-old person, and I have to sprint across the road.”

Tysons redevelopment is far from perfect, and it may very well prove a historic flop. But for the politicians, developers, and bureaucrats who engineered it, there was no other choice. The days of the sizzling-hot office market—the vacancy rate in Tysons dipped to 1.7 percent in the late 1990s, Gordon says—are gone. And they’re not coming back. The era of the suburban office park is over. A multibillion-dollar wager on walkable city centers was the only chance Tysons had for long-term survival.