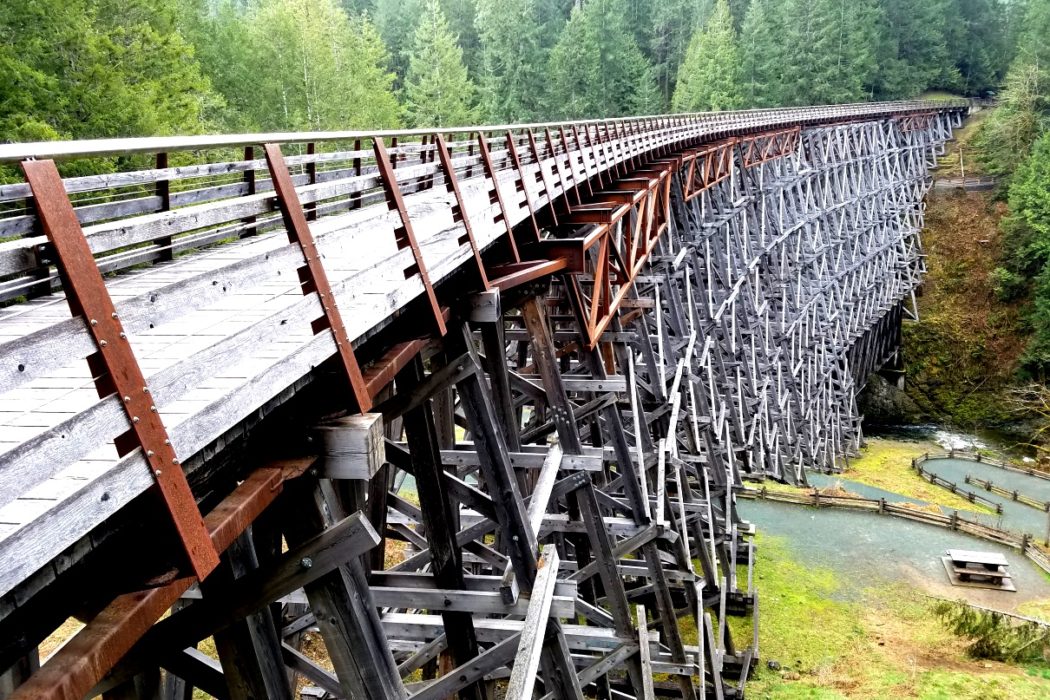 I (Storm Cunningham) was on lovely Vancouver Island in British Columbia, Canada for a couple of weeks last year, keynoting conferences for local watershed groups.

As my wife (Maria) and I traveled around in our rented Jeep Wrangler, one of the many community and economic revitalization opportunities that struck me hardest lay in the restoration of the island’s rail service. The boost to the tourism economy alone would be tremendous.

Now, the engineering firm WSP Canada Group Ltd. apparently sees the same opportunity. They were hired by the BC Ministry of Transportation and Infrastructure to do an assessment of the remaining disused rail infrastructure.

Apparently, it will cost some $326 million (CDN) to restore rail service. 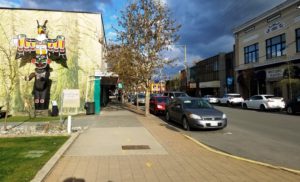 Historic downtown Duncan, a city that would benefit from the restoration of rail service. Many local residents currently commute by car to Victoria. Photo by Storm Cunningham.

WSP’s up-to-date, in-depth track and bridge assessment will be used by government to inform future decisions on investments in the corridor, which is owned by the Island Corridor Foundation.

This was a thorough assessment conducted by railway industry experts to ensure a complete and accurate picture of the railway infrastructure, from ties and track to grade crossings and bridges.

The ministry is currently developing the South Island Transportation Strategy, focusing on the efficient movement of people and goods. The strategy will look at all modes of transportation across southern Vancouver Island, including rail. The strategy is expected to be released in June.

The Ministry of Transportation and Infrastructure engaged WSP Canada Group Ltd. to conduct the detailed evaluation of the Island Rail Corridor on Vancouver Island. 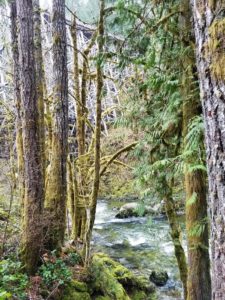 Completed in 1920, it measures 44 meters (144 ft) high and 188 meters (617 ft) long, making it the largest wooden trestle in the Commonwealth of Nations and one of the highest railway trestles in the world.

It was built as part of a plan to connect Victoria to Nootka Sound, passing through Cowichan Lake and Port Alberni, when forestry had gained some ground on Vancouver Island and a more efficient way to transport the region’s huge, old-growth timber was needed. It was not built, as some mistakenly believe, to serve any nearby mines.

The line was started in 1911 by the Canadian Northern Pacific Railway (CNoPR) and while it was designed by engineers, it was built by local farmers and loggers. It was funded by the Canadian Western Lumber Company, which was the largest lumber company in the world at the time.

The trestle was never completed by the CNoPR, and the line only reached Youbou before construction was terminated. The CNoPR was taken over by Canadian National Railways in 1918, and its line and the trestle were completed in 1920 as part of the “Galloping Goose” rail line.

The last train to cross the Kinsol was in 1979, and the trestle was abandoned 1 year later. I, for one, look forward to seeing this spectacular view once again, but this time from inside a rail car.

Photo of the historic wooden Kinsol Trestle on Vancouver Island by Storm Cunningham.