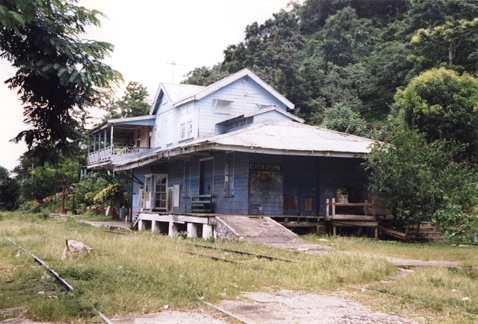 Catadupa is 22 miles South/East of Montego Bay in the hilly interior of Jamaica, at the edge of the Cockpit Country. It’s a place of rivers, hills, lush greenery,a strong variety of fruits, livestock, ground provision and sugar cane.

The trains, now defunct, were a highlight of the area and a major means of transportation, northward through to Montego Bay in one direction and eastward thru’ to Kingston in the other.

The special excursions each week took tourists from Montego Bay to Appleton and back. Catadupa was a unique stop. Women would choose fabric and were measured for dresses and men for shirts on their way up by the many skillful dressmakers. The finished clothing was collected on their return. All in a matter of hours. Here they would also buy fresh, ripe, juicy fruits and local crafts.

The Catadupa Railway Station, constructed in 1895, is a historic two-story Jamaica/Georgian timber structure. Throughout the design glass panel timber doors and sash windows are used. Timber posts and brackets assist in supporting the balcony. The balcony has a star within a square patterned balustrade. The main building is covered with a zinc gable roof.

At the other end of the soon-to-be-revitalized railway is the Appleton Estate rum distillery, whose tours are one of the island’s largest tourist attractions. The Appleton facility has recently completed a $7.2 million (USD) renovation, and now awaits the resurrection of the railway to take full economic advantage of that investment. But that resurrection is behind schedule, which has them worried.

In response, Jamaica’s Minister of Tourism, Hon. Edmund Bartlett, says that the government has engaged multiple investors in the effort to resuscitate rail service to Appleton Estate, which he hopes will greatly boost tourism on the southern coast. The project has a completion date of 2020.

“The rail is going to be a reality. The last discussion I had before I went to my meetings in Spain last week was with the team of entrepreneurs who are putting the dollars together. And they were able to tell me yes, $40 million USD is on the table now to start the first leg of the programme which will take us to Catadupa (in St James) and the second leg into Appleton thereafter. The prime minister, minister of transport and I are excited about coordinating with them to start the first phase of the tracks being put back and the system being active,” Bartlett declared.

“I am committed to working with you at Appleton to move the projected 100,000 visitors to 250,000 by 2020. Next week I am going to be talking to some partners in Miami, who I know will have an interest in this particular experience,” said the minister.

The restored railway from the northern coast is expected to serve as a gateway to the rising tourism boom on the island’s southern coast. The renovated facility includes 26,000 square feet of buildings The upgrade included the renovation of the existing property and surrounding landscape, plus the addition of modern tasting rooms to support visitor education about rums.

The return of the passenger railway service, along with improved roadways to facilitate smoother access to the Appleton Estate, is projected to significantly enhance community tourism along the route and provide increased economic opportunities for many local stakeholders.