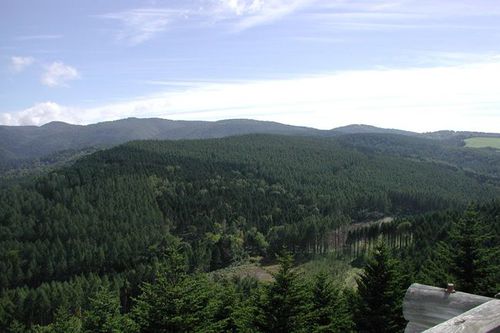 JFS held a symposium on February 9, 2015, titled “Community Initiatives for Survival–from a Local Economy / Regional Revitalization Perspective” to which front-running practitioners in local community development were invited as guest speakers.

One way we bring money into the community is to sell carbon credits in exchange for growing trees, including maintenance and thinning, and their carbon sink effect. In 2009, the town made an agreement with “more trees,” an organization represented by the musician, Ryuichi Sakamoto. Shimokawa was the first town in Japan to introduce an offset credit for forests.

In cooperation with Nippon Professional Baseball, the town is offsetting carbon dioxide emitted through games that last for more than three hours. In addition, beer companies are using the town’s offset program, which generates capital of about 0.14 billion yen (about US$1.17 million) that is re-invested in planting more forests.

Two-thirds of Japan’s land is classified as forest. Among 1,718 municipalities, 734 (43 percent) meet national government criteria for “developing mountain villages” by having over 75 percent of their area under forest. Shimokawa Town might provide a robust model that could spread across Japan to revitalize farming and mountain villages by increasing employment and providing opportunities for achieving self-actualization. I think it could be one of the models for Japan’s future development.

In Hokkaido, 13 out of 179 municipalities are working on biomass projects similar to that of Shimokawa Town. The town intends to promote this approach throughout Japan and the world.