It was Kansas farmer Gail Fuller who “took me to school”, says Ron Nichols a former communications coordinator for the USDA‘s Natural Resources Conservation Service (NRCS).

“You should be ashamed,” Fuller told Nichols bluntly.

As an employee (at the time) of NRCS, Ron had assumed that the agency’s 80-plus years of conservation work would insulate him from such a scathing rebuke. He assumed that the NRCS folks were the ultimate “good guys” when it came to soil stewardship.

“Your agency came up with ‘T,’” Gail said in a tone that rang of indictment. (“T” is a concept developed by the Soil Conservation Service, now the NRCS, that established the minimum soil loss or erosion rate required to sufficiently reduce soil organic content and harm crop productivity. That rate, which is still used today, is measured in tons of soil per acre.)

“Tolerable loss of soil? Do you really think there’s such a thing as a ‘tolerable’ loss of soil?” he asked. “We should be rebuilding our soil.”.

After absorbing the initial impact of Gail’s candid reprimand, Nichols realized Fuller was right. “Okay,” Nichols said, “but can soil regeneration be done profitably on a large scale without reducing productivity?“

“It can and it is. Right here on my farm,” Fuller asserted. 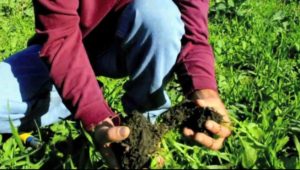 Fuller’s soil is full of earthworms, which are nowhere to be found in today’s toxic, energy-intensive, soil-and-biodiversity-depleting industrial agriculture model.

Half a ton per acre per year of soil loss is considered good soil conservation by many. But not even reducing that loss to zero is enough for Gail Fuller: a net gain in topsoil quantity and quality must be the goal.

A national conservation award winner, Fuller is focused on regenerating soil. He tries to farm in nature’s image, he says, because Mother Nature always wins.

No tillage, 11 to 13 different cash crops in rotation, and 60 to 70 species of cover crops give this eastern Kansas farmer a shot at mimicking nature, but he doesn’t stop there. He sees cash crops planted into dormant perennial pastures as the way forward in a water-short future. And he’s still experimenting on small plots, but also looking to scale up to plant cash crops into those pastures.

“Everything we do now is about carbon. We know you can put carbon back into the soil and pad your pocketbook at the same time,” Fuller says. All that diversity has enabled him to eliminate insecticides and fungicides in recent years, and cut both herbicide and fertilizer use by 75 percent.

This shift in thinking from simply minimizing resource depletion and slowing the rate of new environmental destruction (the usual goals of “sustainability” initiatives) to a regenerative growth model based on restoring natural resources and revitalizing cities was first documented in Storm Cunningham‘s seminal 2002 book, The Restoration Economy.

“The most important thing I could tell my neighbors who are doing conventional tillage is that we’ve learned a better way,” says Fuller. “When we till, even with minimum till, we’re still eroding the soil and still killing the microbial life in the soil.”

By using no-till and rotationally planting, a wide diversity of crops, and cover crops that continuously keep the soil covered above ground and live roots growing below, Fuller is building the health of his soil and the microbial communities living therein. 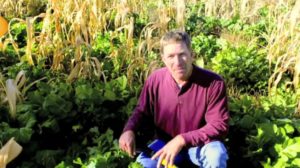 Fuller started using cover crops in the late 1990s, then stopped using them for a few years. In 2004, he gave them another try and he hasn’t looked back since. He’s growing 11 to 13 different cash crops including grain sorghum, triticale, winter barley, winter oats, field peas, corn, and sunflowers and uses another 55 plant species as cover or companion crops. He now plants 11 months out of the year, compared to squeezing all his planting into two or three months of the year with conventional monoculture systems.

“We’ve got to get away from monocultures and into a polyculture with diversity below and above ground. We need multiple species and a much more diverse root system,” Fuller says. “We have a finite supply of phosphorus, crude oil, and soil,” he says. “All three of those are in short supply. If we continue to do things as we have done them in the past, we will deplete those resources and be forced into a new style of farming. We need to make the change before we’re forced into it.”

While most farmers are concerned about how and when they’re going to terminate their cover crops, Fuller is experimenting with ways he can keep them growing as companion crops instead.

“We’re trying to use them as companion crops with our cash crops,” he says. “So the big challenge for us is finding a means to knock the cover crop back for a few days to allow the cash crop to come through and get ahead of the cover crop so it can compete. We were able to use a crop roller with help from a neighbor this year and that’s definitely something we will pursue next year. That will help us get away from chemicals even more.”

Fuller says he stumbled across companion cropping by accident about five years ago when he didn’t get his alfalfa killed. “We had a poor stand of alfalfa we were going to take out for a cash crop,” he says. “Well, we didn’t get the alfalfa killed, but we got a great cash crop along with a very aggressive alfalfa crop. So I began to investigate, and learned other producers were trying it.”

“About two years ago, I asked myself why I ever planted a monoculture into a monoculture,” Fuller says. “I’ve watched and now I understand how plants grow differently together than by themselves. Now we’re looking at what we can grow with our corn or with our wheat.”

“There’s a lot of trial and error,” he says. “We’re trying companion crops on every cash crop we have, in small test plots. Winter barley with a clover mix, or winter canola with a clover mix work well. We’re also trying intercropping with two cash crops side by side spring oats and field peas, and combinations of flax, safflower, peas, and oats.”

Canola seems to work best with a companion crop so far, he says, and legumes will be the toughest to incorporate a companion crop into. A lack of rain needed for a good crop in his area the past couple of years has complicated his companion cropping decisions.

“Cover crops add mulch to cover the soil, but when they’re used in a mixture they do a lot more than that,” Fuller says. “Our water infiltration has gone up exponentially with cover crops, and at the same time, they hold moisture in the soil in a dry year. They feed microbes and add organic matter to the soil, and that’s a key.”

Fuller has also seen a wide, wide range of insects now with the management system he has. “That’s what I want,” he says. “We try not to use insecticides. Any time you use an insecticide to kill bugs you don’t want, you’re also killing their predators. We’ve got to have those insects in there. We’ve noticed if you can just be patient, the predators will follow the prey. They will usually take care of whatever pest problem we have.”

He’s tested his soil, and also noticed with his management system he has a large number of microbial predators that will prey on microbes that cause germination diseases and such problems.

“I grew up thinking I was being a great steward of the land. I really didn’t give much thought to the health of the soil,” Fuller says. “It just kind of came along after I switched to no-till,” Fuller admits. “But now I’m farming with soil health as a priority. I’ve seen how much better everything can be, and I realize my past methods weren’t as good as I thought they were. The health of my soil is what I need to concentrate most on,” he says.

According to Fuller, anyone can make the change to farming with soil health methods. “It takes a mindset change, and you can’t cave to peer pressure,” he says. “Most of my neighbors think I’m nuts, but a few are watching and asking questions. Some of them are seeing the value of no-till and cover crops.”

He used to think it took 5-6 years just to begin building healthy soils. Now, he can see a difference in a couple of years but only when he uses cocktail mixes and has living roots in the soil all the time. “One of the most important things I’ve learned is that if you can be patient and live by Mother Nature’s rules, she will reward you,” he says. “But I’ve got so much more to learn.”

Fuller has seen some negative effects, but he attributes those to having to do his own research, all of his own experimenting on the farm. “When you do that, you’re going to have failures, and we have a lot of failures,” he says.

But Fuller continues to look forward. “We take those blows and we move on. We know this is the right thing to do this is what the farm of the future will look like,” he says. “When we get this system figured out, it’s going to be a beautiful system both from a soil health standpoint and from my pocketbook’s standpoint. Any time you can cut your inputs by 80-90 percent, you’re going to have a much healthier bottom line.”

As this 2010 TEDx talk by Storm Cunningham points out, sustainable development is a wonderful thing, but it’s two centuries too late. The mindset needed now is to leave the world better than we found it, not just “less worse”.