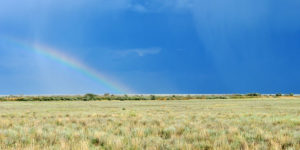 At one time, the steppes of Central Asia teemed with mammals like the Turkmenian wild ass, Przewalski’s horse, saiga antelope and Turkmen gazelles.

In the 12th century, the greatest military general the world has ever seen, Genghis Khan, decreed that no one in his empire—except his armies—could hunt them for most of the year. In a massive military hunt he staged every winter, the blood of animals flowed across the grassland.

Almost a century ago, the wild herbivores of Kazakhstan suffered another setback when the country became part of the Soviet Union. The communist regime encouraged settlements and livestock husbandry in the steppe. Between the twin perils – hunting and competition with livestock for winter forage and water – the animals of the temperate grasslands stood little chance.

The region’s occasional severe winters pushed the survivors over the edge. It’s a similar story in the neighborhood – Uzbekistan, Turkmenistan and Iran. Although the saiga antelope still holds out, the Przewalski’s horse and the Turkmenian wild ass disappeared.

The species’s population had recently been in decline in Turkmenistan, but is slowly increasing at reintroduction sites in neighboring countries. The Turkmenian kulan has been reintroduced to Kazakhstan, Uzbekistan and Ukraine, where the onagers formerly existed, also in Israel, where the subspecies is hybridizing with Persian onagers in the wild.

After their local extinction in Kazakhstan in the 1930s, the kulan was reintroduced in four localities of Kazakhstan (where live about 900 specimens), and in Uzbekistan afterwards (34 specimens). 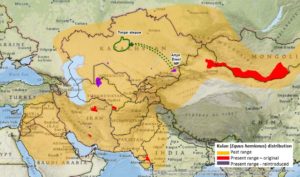 In 1984, 32 kulans were reintroduced to the Kapchagai Game Area, which subsequently became the Altyn-Emel National Park (over 50,000,000 hectares in area), from southeastern Kazakhstan which consists of desert, between the Ili River and the Ak-Tau mountain range, near Lake Kapchagai. 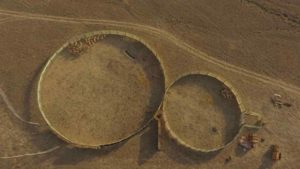 The Turkmenian kulans are breeding in captivity in zoos, breeding centers and wildlife parks part of the American (SSP, AZA) and Eurasian (EEP, EAZA) captive breeding programs. There are over 1000 Turkmenian kulans registered in the international studbook of the World Association of Zoos and Aquariums (WAZA).

As a result, Turkmenian kulans—along with the Przewalski’s horse—have also been reintroduced to other parts of their historic range in Asia, such as the Askania-Nova Biosphere Reserve in southern Ukraine.

Now, an international coalition of organisations coordinated by the Norwegian Institute for Nature Research (NINA) is working to get the kulan back to central Kazakhstan under a program called KULANSTEP.

Other organisations involved in KULANSTEP project are:

The kulan reintroduction project is firmly embedded in the ongoing wider conservation activities of the Altyn Dala Conservation Initiative (ADCI), which is a joint initiative of the Association for the Conservation of Biodiversity in Kazakhstan (ACBK), the Committee of Forestry and Wildlife of the Ministry of Agriculture of Kazakhstan, Fauna & Flora International, Frankfurt Zoological Society, and the Royal Society for the Protection of Birds.

Unless otherwise credited, all photos are copyright © Petra Kaczensky/NINA.

See article by Janaki Lenin in The Wire.