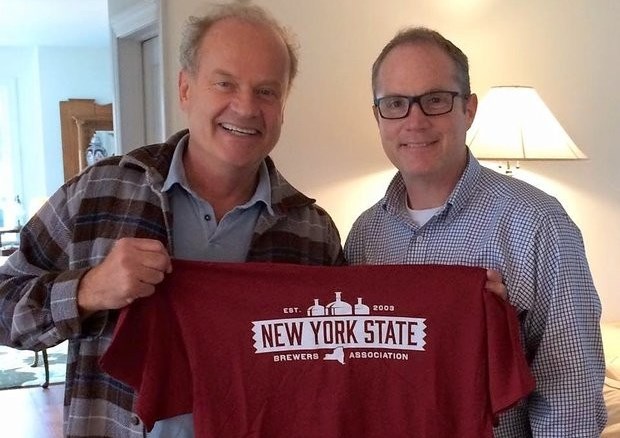 Now, his fans will have a more-intimate way to drink with him than vicariously via TV: at his own microbrewery. His Faith American Ale is named after his youngest daughter: Faith Evangeline Elisa Grammer.

Grammer’s new brewery will be located in a repurposed barn on an old cauliflower farm he purchased 25 years ago, which will be repurposed to grow hops and barley for the beer production.

That farm is in one of the most economically-depressed counties in upstate New York: Delaware County.

Grammer says it’s his “favorite place in the world”, because he used to vacation in nearby Catskill Park with his parents as a child.

“It was such a prosperous place and then it really fell on hard times — Delaware County specifically,” he said. “And it’s been, I guess, the poorest county in New York state for a long long time.”

When Margaretville, New York fell into economic dpression, Grammer looked for a way to help revitalize it. “I always wanted to return this particular place to a sense of thriving community that would lift everybody up a little bit,” he said.

He’s hoping his brewery will help to build the town’s commerce. There’s a very good chance it will succeed in doing so, given the revitalizing power of microbreweries, which has been documented many times previously here in REVITALIZATION (do a keyword search).

Watch video of Grammer’s announcement on “Live with Kelly & Ryan”.

See article by Carolyn Menyes in The Daily Meal.