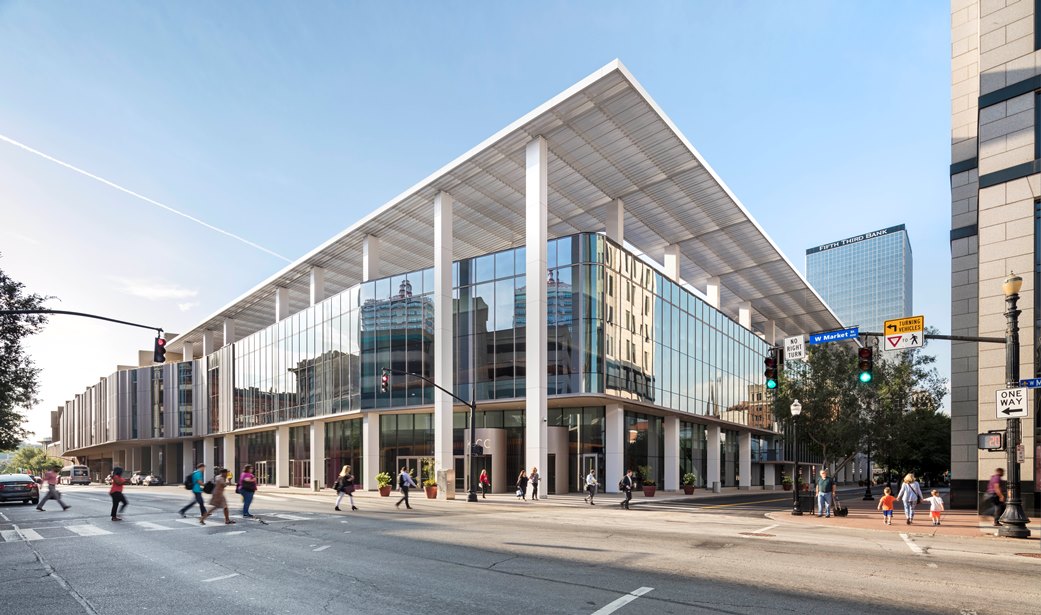 The 960,000-square-foot facility underwent a two-year, $207 million transformation ahead of its grand reopening on August 6, 2018. 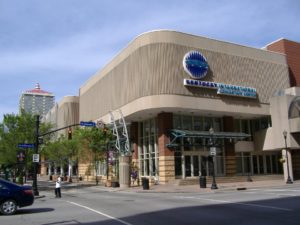 KICC prior to redesign and renovation.Photo by Bedford via Wikipedia.

“Convention centers tend to be introverted building typologies, buildings that are inwardly focused and turning away from the city. For KICC, we chose to create an urban extrovert. This is a building that celebrates its place in Louisville, a convention center that uses its activity and presence to contribute to the vitality of downtown,” said Peter Ruggiero, design principal with HOK.

“The new convention center highlights its civic role and presence with a distinctive colonnade and canopy that unify existing and new elements,” Ruggiero added, “while a consolidated new front door acts as an inviting front porch for the city.”

The redesign has transformed the masonry walled structure into a place that is intended to tell the world about Kentucky, truly representing the heart and soul of Louisville. “Louisville has a unique personality, and we wanted the design to focus on the visual and functional connection with the city,” EOP Design Partner Rick Ekhoff explained. “Its architecture has been inspired by Louisville and provides an identity that visitors will associate with the city.”

During the two-year project, the western half of the building was redone to pave the way for a glass facade and new public circulation spaces to represent the building’s new extroverted personality.

Other major updates include the addition of new main entrances on Fourth Street and a canopy with a color lighting display. Dynamic vertical oak wood paneling divides pre-function gathering spaces from the ballroom and serves as a nod to local distilleries and Kentucky’s famous bourbon trade.

Additionally, Oak & Brew, a new hybrid morning and evening restaurant, has opened within the center, bringing local fare and Kentucky bourbon to visitors and show attendees.

“Convention centers are often difficult to navigate because of their large size and use by out of town guests,” commented Richard Polk, AIA, EOP’s managing partner for the project. “One of the design challenges was to improve wayfinding, which was done by simplifying circulation paths and opening up interiors with visual connections to outdoor spaces.”

The center features a total of 200,125 square feet of exhibit space, a 40,000-square-foot ballroom, 52 meeting rooms and a 175-seat conference theater. Its new full-service kitchen can accommodate 15,000 meals per day.

Retrofitted for the 21st century, KICC’s updated design reimagines the role of the convention center, and stands to further boost the economic revitalization of downtown Louisville.