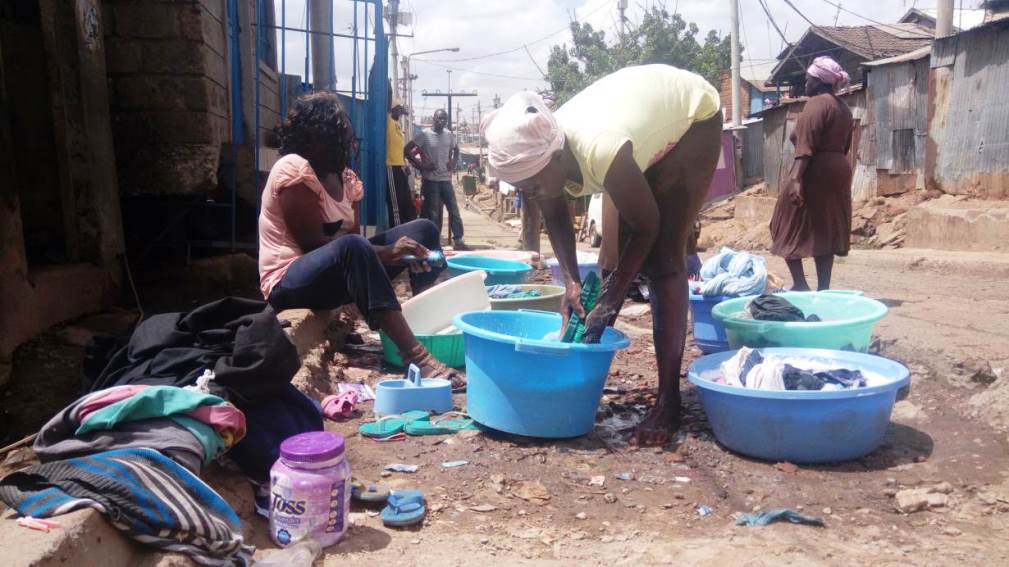 As the global restoration economy accelerates, it’s reaching deeper into communities, including slums, as this Thomson Reuters Foundation article describes.

Edwin Murimi, deputy director of environment and climate change for Nairobi, Kenya, says the city has teamed up with the national government and with partners like the World Bank, UN-Habitat and C40 Cities network to fast-track programmes to boost the resilience of vulnerable communities to extreme weather and environmental risks.

“A lot has happened in Nairobi … like regeneration of our parks and open spaces in the estates by planting resilient trees to increase green cover, waste collection and unblocking of drains to avert floods,” Murimi said.

Safer housing is another key part of that strategy. In Kibera‘s Soweto East neighbourhood, for example, 1,200 households have been relocated to a less risky area next door in Langata with improved homes and basic services, while 900 housing units and 250 market stalls have been built in Soweto.

And 205,000 Kenyans have already registered for a new government scheme called “Boma Yangu” (My Home), which aims to provide half a million affordable homes in the next five years. 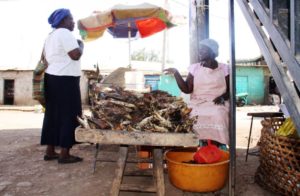 Food vendor Mary Akinyi with her dried fish at the side of a busy road in Kibera. Photo by Thomson Reuters Foundation/Wesley Langat.

Nairobi County’s 2018 development plan showed more than 80 percent of residents had access to piped water, with only 1 percent taking more than half an hour to reach a water point.

These days she can wash her clothes and fetch water for nothing, spending the money she saves on milk for her child.

Cleaning up the slums has been another priority for the city government, which has purchased new trucks to enable daily rubbish collection, Murimi noted.

Dan Wesonga, a community mobiliser who coordinates the collection of solid waste at Kianda village in Kibera, said new sites had been designated for waste disposal.

“Garbage used to stay here for weeks but currently they collect every day,” he said. “We also sensitise the residents to bring their garbage here – that’s why there is no bad smell.”

But the government still needed to help people recycle more locally, which would also cut its transport costs, he added.

Food vendor Mary Akinyi, 39, a single mother of three, arranges her dried fish daily on a table at the side of a busy road in Kibera, Nairobi’s largest slum, getting ready for peak hours in the early evening.

The road, built in 2014, has been good for business. “Many people pass here, and from 4pm I get a lot of customers – they even queue to buy fish,” said Akinyi jovially.

Before, there were no tarmac roads to Lindi, a village in Kibera, restricting custom and hiking transport costs. The alleys leading to the centre would flood in the rainy season, while insecurity forced traders to shut up shop early.

The United Nations projects that 68 percent of the world’s population will be living in cities by 2050, up from 55 percent now, with 90 percent of that growth in Asia and Africa.

As climate change hits African farmers hard, people are migrating in growing numbers from rural areas to cities, where they are exposed to floods, fire and other dangers – a problem Nairobi is trying to tackle by upgrading its slum areas.

Before the 3.5-km (2.2-mile) Lindi road was built, Akinyi used to pay about 400 Kenyan shillings ($3.96) to get her fish transported 2 km from the bus station to her stall – with local boys she hired to help sometimes making off with her produce.

But since the area became more accessible, she can take a tuk-tuk rickshaw or motorbike taxi for only 100 shillings, and arrive in less than 10 minutes.

Andrew Aluo, a motorcycle taxi driver from Mathare, another big informal settlement in the Kenyan capital, said the Nairobi City County government was improving the slum by opening it up, installing street lights and supplying water. “We have new and motorable routes into the villages, unlike before,” he said.

In the past, most of the dirt roads got muddy in the rainy season, meaning he could not find any passengers. Emergency services, such as the fire brigade, can now also access the slum much more easily, he added. 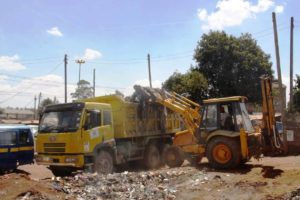 Phillip Dinga, an advisor with C40, a group that helps cities around the world tackle climate change, told the Thomson Reuters Foundation urgent responses were needed to deal with the explosion in urban populations.

“Big industries (are) coming up – energy, huge buildings and the transport sector are expanding (and) this means there will be a lot of emissions,” he said, referring to planet-warming gases mainly generated by burning fossil fuels.

C40 is helping Nairobi craft a climate change action plan, due to be adopted in late 2020, which will focus on reducing emissions from energy and transport, fostering sustainable urban food systems and managing waste.

Dana Omran, managing director for Africa at the (now-defunct) 100 Resilient Cities network, noted that by 2025, Africa would have 100 cities with more than 1 million inhabitants each, as well as six of the world’s 41 mega-cities.

“As our global climate continues to change, so has the intensity, frequency and unpredictability of natural hazards increased,” said Omran by email. “Globalisation adds another layer (which) means that cities are at the frontlines of our world’s greatest challenges.”

To help protect Nairobi residents from the risks linked to climate change and air pollution, city official Murimi said staff were being trained on those problems and air-quality monitoring kits procured for schools and other strategic spots.

The city also planned to set up a facility to produce energy from waste, while advocating for green buildings that use energy and water more efficiently, he added.

The original version of this article (slightly edited here) by Wesley Langat and Megan Rowling appeared on the Thomson Reuters Foundation website. Reprinted here with permission.