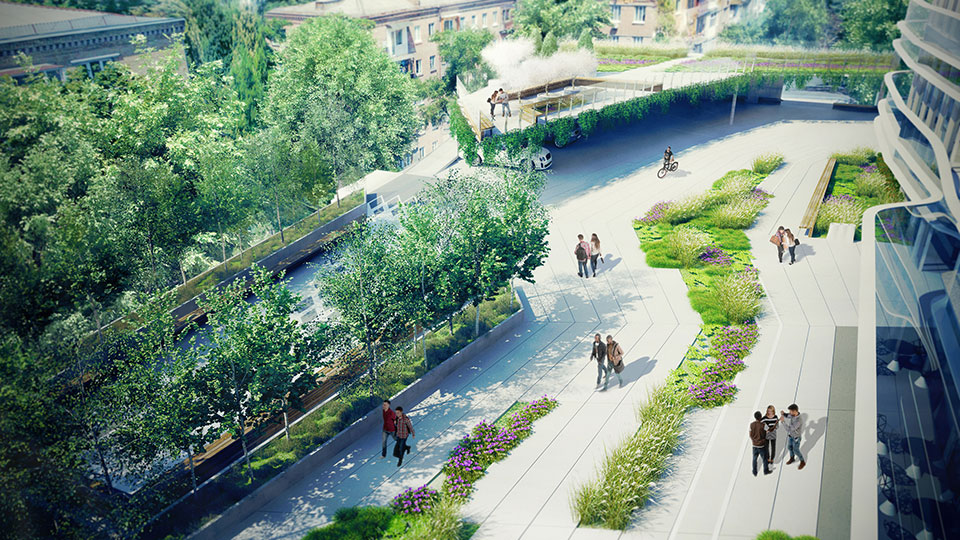 Kiev (officially changed to Kyiv in 1995, though without much adoption by the locals) is the capital and largest city of Ukraine, located in the north-central part of the country on the Dnieper River. With a population just under 3 million, Kiev the seventh most populous city in Europe. 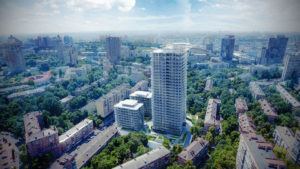 Kiev is an important industrial, scientific, educational, and cultural centre of Eastern Europe. It is home to many high-tech industries, higher education institutions and world-famous historical landmarks. The city enjoys excellent infrastructure with an advanced public transit system that includes the Kiev Metro.

Now, in downtown Kiev, the locally-based design firm of Dmytro Aranchii Architects has started repurposing the dead space of shopping center’s large roof into an interactive garden with spectacular views. 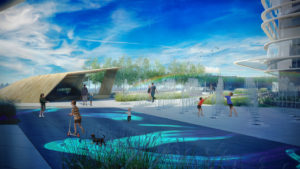 Called the Signature Garden, the 6000 square meter park provides a space for visitors to dine and play while enjoying both the plants and the water features.

One problem with high-rise residential development is the way it disconnects residents from retail and green space in the neighborhood. In a small-scale example of the 3Re Strategy, the Signature Garden repurposes and renews the rooftop, and reconnects the commercial space below with the residential space above.

The reactivated rooftop provides playgrounds, a restaurant, and wide-open space to enjoy the greenery: a rarity in most downtowns anywhere in the world. A shallow pool acts as an urban pond, letting people get their feet wet in hot weather. 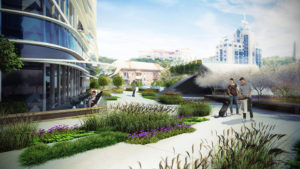 The plaza boasts a wide variety of vegetation, arranged attractively in what the architects refer to as “Van Gogh strokes”, due to their dynamic shapes that suggest movement.

Additional plantings along the perimeter of the residential towers help cool the area in the summer. The landscaping includes plants such as cotoneasters, birch trees, and perennials that were selected specifically to match Ukraine’s continental climate. 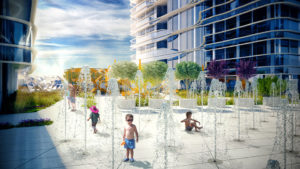 The water features are designed in a way that allows visitors to “communicate” with the architecture. As part of the park’s Interactive Zone, the fountain changes its state based on the relative position of nearby viewers.

For example, the fountains have a feature called “God mode” in which the water makes way for a person walking (a la Moses and the Red Sea), gradually rising as the distance increases. 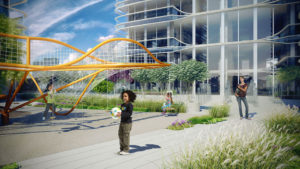 That water feature is situated next to another interactive element, which projects color and light onto the pavement, also in a dynamic manner based on the number of people and the nature of their movement.

There are three viewing platforms, including a designated performance space called The Cave will feature a viewing platform on top, and a small amphitheater inside, housing both permanent and temporary exhibitions.

Signature Gardens faces the Parus business center, and is positioned to shield the residents from traffic noise, while allow restaurant clients to hear the sounds of the city. 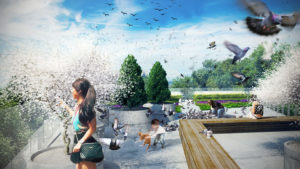 The playground offers children opportunities to see-saw, climb, crawl, or run, and is located between the residential towers, thus making it easier for parents to monitor their children.

There are shade trees in mobile tubes, surrounded by movable benches that visitors can rearranged according to the weather and their preferences.

The Cave was sensitively designed so that the sounds of evening performances would not annoy the towers’ residents, while still being enjoyed by diners at the restaurant. A limited number of parking spaces have been allocated on the periphery, primarily to accommodate the restaurant.

Hopefully, they’ll use better structural engineers and contractors on this project than were used when building the green roof on the Zolitūde Shopping Center in Riga, Latvia, about 1000 km north of Kiev. On November 21, 2013, that roof collapsed, killing 51 people.