In the old days, Zhujiadian Village—which is in the southern town of Jinxi, which is part of the city of Kunshan—was called Chen Grave.

From above, Zhujiadian looks like a lotus leaf floating on Changbai Lake, and almost a dozen old kilns are located east of the village. Qian Siyuan, a poet in Qing dynasty, wrote “Kilns are a noble scene, like a great number of fish scales shining, which always be there years and years.” 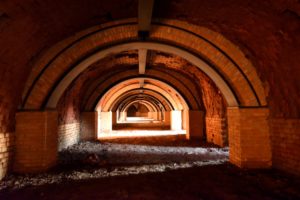 These historic brick kilns in the Chinese province of Jiangsu are where the Gold Bricks used in the construction of Beijing’s Forbidden City were manufactured. It’s hoped that these historic kilns will now manufacture new riches to the village, which is in desperate need of them.

In 2014, the ancient kilns were still working and emitting curls of smoke. But with the decline of traditional technologies, increasing numbers of people were leaving the village for opportunities elsewhere. 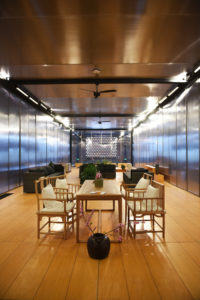 The village became desolate and largely forgotten to outsiders, despite the fact that the nationally-famous village of Zhou Zhuang was only five miles away.

Mr. Cui, a member of Chinese Academy of Engineering, suggested the concept of “micro intervention”, using a single intervention point to change the entire village.

They chose an abandoned factory in the west of the village as that intervention point, turning it into a brick museum.

The goal is to attract tourists, and help them understand the important history of Gold Bricks. 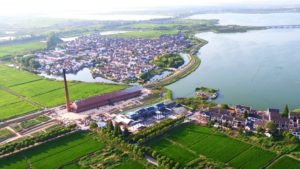 After the museum visit, tourists will move from west to the east, touring the old kilns on the other side of Zhujiadian.

This forces them to pass through the heart of the village, hopefully leaving money in their wake (sort of a community version of museums’ “exit through the gift shop” approach). This creates opportunities for entrepreneurial villagers, such as creating shops, a cafés, B&Bs, inns, etc.

To renovate the factory, the designers used a concept they called the “Safety core”, which preserves the original appearance of the brick factory. They created 3 cores on the upper floor inside the factory to functionally replace the deteriorated structures. Between the cores, two reflected boxes are designed to accommodate restrooms and equipment. 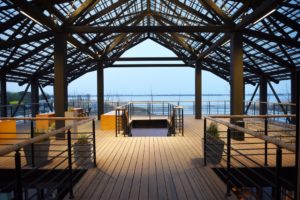 To reduce roof weight, they designed a new product the called “transparent tile”, which is very light.

Inside the new building, all the floor blocks, furnish blocks, metal blocks and equipment blocks can be exchanged to offer different kinds of spaces in a small rural building. As a result, event programmers change the functions almost monthly. 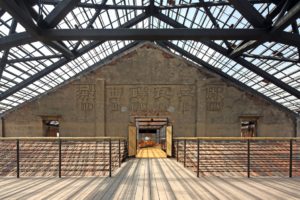 The most dramatic modification to the building is the terrace to the lake where people can enjoy the beautiful scenery of Changbai Lake, and enjoy contemplating the meaning of the words “DIAN XI ZHUAN WA ER CHANG” that were inscribed long ago on the ancient, untouched wall.

The resulting design is considered sustainable, and the owner already wants to move to the next phase which will strengthen and reuse the lower basement of the factory.

The owner had put a lot of steel arches inside the kiln space which were not aesthetically suitable for the dilapidated building. These were covered with brick arches, a design feature seen in the kilns 200 years ago. 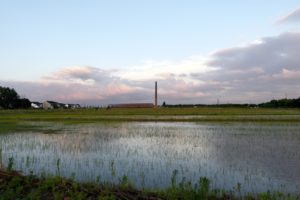 The new brick arches Integrate a space-time tunnel which can lead us to the old days and the working scenes.

To protect the old stairways where workers had carried coals and water into the upper floor, new steel stairs were built, but the old ramps can be seen clearly.

If you’ve always been looking for a good reason to visit Zhujiadian Village, now you have it.