Even better, the $5.3 million SunMine is located on Teck’s former Sullivan Mine Concentrator site, which has been fully reclaimed. The Province’s Innovative Clean Energy Fund (ICE) program has provided $1 million for SunMine through the EcoSmart Foundation, a Vancouver-based non-profit foundation promoting economically and ecologically smart projects between public and private sectors. 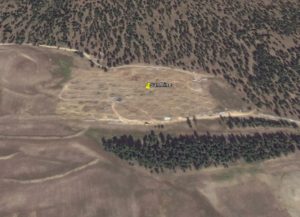 The post-mining site prior to SunMine construction.

The SunMine project also acknowledges the support of Columbia Basin Trust, which supports efforts to deliver social, economic and environmental benefits to the residents in the Columbia Basin. Additional funding and assistance has been received from the Southern Interior Development Initiative Trust.

SunMine is community owned, distinct and well suited to capitalize on Kimberley’s clear and sunny conditions.

A 2011 referendum saw an overwhelming majority of Kimberley voters support the City borrowing $2 million toward construction of SunMine. The City and its partners spent three years working to securing funding, negotiate ownership, undertake due diligence and prefeasibility studies, and complete 17 agreements with eight different organizations. 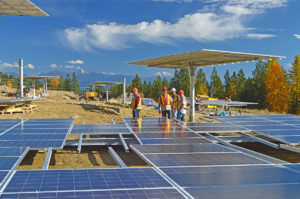 In addition to energy generation, SunMine will benefit the regional economy through increased visibility and awareness. The engineering and project experience will garner the region a competitive edge for future initiatives in the growing renewable energy market.

Following a competitive process Conergy Canada was selected as the prime contractor to provide SunMine’s engineering, procurement, and construction management.

SunMine is commercially operating and the future is bright. Learn more about why sunshine makes Canada’s highest city a good place to be generating innovation. Discover how solar energy makes sense for collaborative community and partnerships.

Since the project was completed in 2015 SunMine and its partners have been honored with:

SunMine has 4,032 solar-cell modules, mounted on 96 solar trackers which follow the sun’s movement, maximizing solar exposure. It is the first solar project in BC to sell power to the BC Hydro grid.

The project is being supported by Teck, whose involvement, first announced in 2011, includes providing land and site infrastructure as well as a $2 million contribution towards the project.

The EcoSmart Foundation is a not-for-profit Canadian corporation based in Vancouver, BC, Canada. Their mission is to advance innovative technologies and practices that are ecologically and economically smart. Their work focuses in creating collaborative industry-government partnerships to further sustainability, primarily within the renewable energy, green building and sustainable construction industries. Throughout Canada and internationally, EcoSmart works to shift market forces, policy and public awareness toward the development of sustainable economies, ecology and societies.