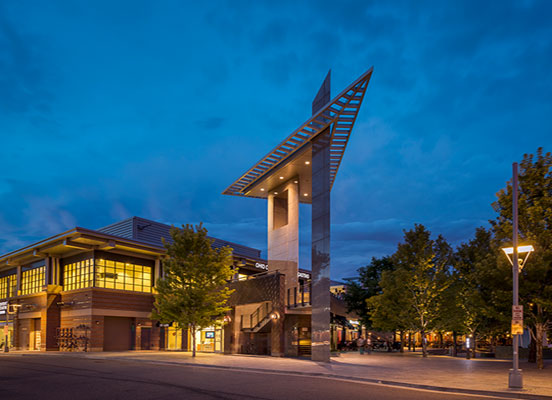 Although Lakewood, Colorado, is the fifth largest city in the state, until the last decade the city had no true downtown.

Instead, the Denver suburb boasted one of the country’s largest indoor shopping malls. Built in the 1960s, by 2000 it was largely vacant.

That mall has been converted to a downtown called Belmar, anchored by a 16-screen cineplex, Whole Foods, Target, Best Buy, Nordstrom’s, and a bowling alley—surrounded by 76 stores, 20 restaurants, and a block of artist studios.

There are nine acres of urban parks and plazas—places that were lacking for the 147,000 residents of Lakewood prior to the transformation.

Employers occupy 281,000 square feet of office space, with more under construction—along with a new Hyatt hotel. Belmar hosts a weekly farmers market, festivals, and outdoor music performances for the city.

The economic activity and sheer, diverse living in Belmar dwarfs that of the mall that was replaced. See below the fine-grained pattern of buildings in 2015 compared to lack of diversity on the site previously.

“Urban renewal took an outdated mall with an abysmal 60 percent vacancy rate and morphed it into a vibrant urban landscape that serves as home to more than 2,000 residents and generates approximately $200 million a year in retail sales,” says Lakewood Mayor Bob Murphy.