A land trust is a nonprofit organization that actively works to conserve land by undertaking or assisting in land acquisition or the development of conservation easements. Land trusts work with landowners and the community to conserve land by accepting donations of land; purchasing land; negotiating private, voluntary conservation agreements on land; and stewarding conserved land through generations.

Increasingly, they are also focusing on environmental restoration, given the highly-degraded state of so many properties these days. The Sonoma Land Trust (SLT), north of San Francisco, recently made a big splash for birds with the breaching of an historic levee—the culmination of a ten-year effort to restore tidal wetland habitat for waterbirds and other wildlife. 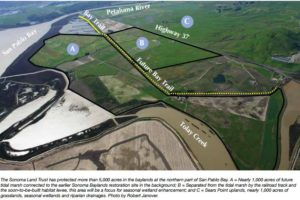 This large-scale restoration is called the Sears Point Restoration Project. The nearly 1,000-acre portion slated for tidal wetland restoration housed farm buildings, hay fields, and an upland game bird hunting club. The plan was to remove all the human built structures, create some new and innovative natural features to hasten the evolution of the new marsh, and then to breach the century-old levee to bring back the tides.

This was one of One of SLT’s greatest achievements. It began in 2003, when a plan to build a Las Vegas-style casino on the shoreline lit a fire under the conservation community. Not only would such a development permanently alter the region’s rural character, it stood in the face of every major conservation plan for the Bay.

The proposed site was entirely within the historic Bay margin—the area once part of the bay but reclaimed for agriculture, industry, and other development. SLT and partners, such as the San Francisco Bay Joint Venture, worked to convince the project proponents, a local Native American tribe–the Federated Indians of Graton Rancheria–that this proposal would be at odds with conservation initiatives.

The efforts were rewarded not only with the tribe relinquishing its right to purchase the site but it also donated its purchase option valued at $4.2 million. Over the next two years, SLT raised a total of $20 million to buy the property and, conveniently, the one next door. Collectively the 2,327-acre site is known as Sears Point.

“Historically, over a quarter of the bay’s estuarine habitat was up here at the north end of the bay,” said Don Brubaker, the National Wildlife Refuge manager for the U.S. Fish and Wildlife Service, one of about two dozen partners in the project. “We’re going to see ducks coming in, and wading birds like herons and egrets … eventually, salmon could move in here.”

“We are putting a big down payment toward our sea-level-rise insurance policy,” said Jared Blumenfeld, the southwest regional administrator for the Environmental Protection Agency. “I have spent a lot of time trying to make levees bigger and stronger, so this is ironic. But what we learned with (Hurricane) Katrina is that when the Mississippi Delta was eliminated, that created more of a problem when the sea rose.”

Watch video of the restoration work in progress.

See related article by Derek MNoore and Diane Peterson in The Press-Democrat.