In Sevilla, Spain, there’s a large waterfront area on the Guadalquivir River that has—like so many spaces created for one-time events like Olympics—been left to deteriorate after the show is over.

What was once the center of activity is now mostly a parking lot surrounded by degenerated natural areas. But regeneration is now happening on a grand scale.

Architect Vázquez Consuegrasay says this about the project (translated from Spanish): 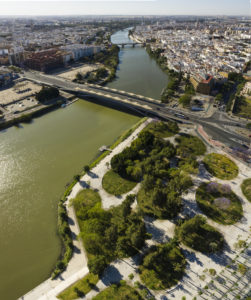 “The land of the intervention is located on the right bank of the Guadalquivir River, bounded by the Navigation Pavilion and the Chapina Bridge on its north and south sides and west by the new route of the Path of the Discoveries.

The edge of the river will delimit the perimeter to the east of the new gardens.

These lands, with an area of approximately 40,000 m², formed the sector called Puerta Triana, South access to the grounds of the Universal Exhibition of Seville in 1992.

It was a heterogeneous conglomerate of diverse episodes that poorly coexisted in an impassable and inhospitable enclosure, abandoned to their fate after the end of the Universal Exposition. 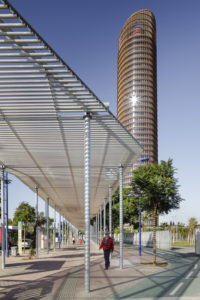 The proposal aims to generate a landscaped public space of quality from the pre-existence of the place: the horizontal esplanade, used today as a large surface car park and the sloping terrain towards the river dotted by the presence of some groups of trees, in an advanced state of degradation and abandonment.

In the general intervention strategy, the idea of demolishing all those pre-existing elements without constructive or architectural value will prevail in order to give preference to the presence of vegetation. Reduce construction in favor of green.

The proposal generates a new soil for this dispersed grove from the construction of green ellipses (plant set) that group the trees in forests. Among them, by negative, an isotropic network of routes is established, adapted to the existing topography.

A walk, following the river bank, runs the plot lengthwise, facilitating access to the new Rowing Sports Center and allowing the connection between the Paseo de la O in Triana and the gardens that are located upstream, beyond the Pavilion of the Navigation. 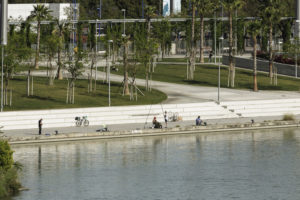 Drainage is a key issue in our project. The drainage network is established based on the perimeters of the ellipses, designed as rainwater surface channelling edges (all the pavement of the gardens is porous concrete), built through ditches that house a system of double drainage cells to enhance the inﬁltration of water into the subsoil. A sprinkler network will allow the introduction of new trees and creepers of woodlots.

The action is complemented by the construction of the new Municipal Rowing Center, now next to the Navigation Pavilion, in order to free the riverbank from construction and with the location of a large umbrella that will house diﬀerent uses, a new and suggestive meeting and stay space.

Conceived as a large metal pergola, galvanized and completely screwed, it is covered by a continuous climber plant.

This element of three hundred meters in length and ﬁfteen meters in width (the City Council reduced ﬁve meters from the initial project) builds a convenient barrier between the road of the Path of the Discoveries and the new gardens. 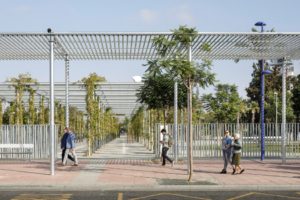 A project in which criteria of rationality and proﬁtability prevail as well as economy of gestures, well away from excesses and superﬂuous episodes.

An adequate choice of materials, both for the construction and for the limited existing furniture, will guarantee at the same time the tight budget of the intervention as well as the low maintenance costs.

A project that tries to oﬀer a great variety of diverse and intertwined spaces: sunny and shady, meeting and relationship spaces but also spaces for stillness and tranquility.

Dynamic transit spaces and relaxed areas of stay. Spaces for everyone.”

All images courtesy of Fernando Alda.