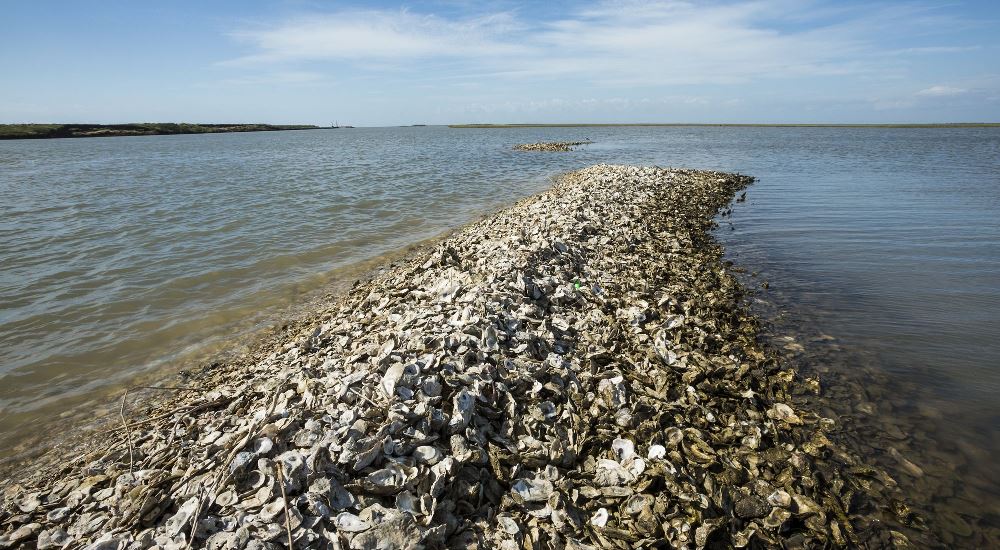 On November 14, 2018, The Nature Conservancy kicked off a new oyster reef restoration project in Copano Bay, Texas using a hybrid approach that promotes the restoration of Gulf of Mexico ecosystems while helping to revive the state’s commercial oyster fishery.

With this unique model, half of the reef is designed as a habitat reef while the remainder is intended to be easily harvestable and open for commercial fishing.

“Revitalizing oyster populations is vital to the health of the Gulf and prosperity of the region,” said Laura Huffman, Texas regional director of The Nature Conservancy. “This new restoration approach can boost the oyster industry and, at the same time, support the natural resources it thrives on. We have a really unique opportunity to lead the charge for the Gulf and show that this isn’t an either/or proposition—there’s a solution here that can benefit both people and nature.”

Gulf fisheries serve as the cornerstone of a $220 million-dollar national industry, producing nearly half of all oysters consumed in the U.S. each year and impacting the state economy to the tune of $43 million annually. However, a newly-released report from The Nature Conservancy found that across the Gulf, oysters are at historic lows.

The Deepwater Horizon oil spill, in combination with decades of overharvesting, hurricanes, disease and changes in freshwater flows to Gulf rivers and streams, has wreaked widespread destruction on the region’s oyster population, leaving an estimated 20 to 50 percent of the original reefs remaining in the Gulf of Mexico. This dramatic decline has damaged the stability and productivity of the Gulf’s estuaries and harmed coastal economies.

The Copano Bay project will utilize over $5 million in funds obtained through a settlement for damages to natural resources that is jointly managed by the Texas Commission on Environmental Quality, Texas Parks and Wildlife Department and the Texas General Land Office.

In addition to serving as a food source and supporting the commercial fishing economy, oysters provide a host of benefits to marine ecosystems: they support habitat for a diversity of marine life, reduce shoreline erosion, buffer storm waves and sea level rise and clean and filter pollutants out of bay waters.

The Copano Bay project builds upon the Conservancy’s success in 2014 at Matagorda Bay’s Half Moon Reef, where The Nature Conservancy completed one of the largest oyster reef restoration projects along the Gulf Coast. Almost four years after completion, oysters can now be found on 70 percent of the reef’s surface, oyster size has increased 551 percent and biodiversity is 1,014 percent greater on the reef than the adjacent bay bottom.

Additionally, increased fishing after the reef’s restoration added almost $700,000 to the Texas gross domestic product and generated an additional $1.27 million in annual economic activity. The Conservancy and its partners hope to produce similar results on the new reef in an effort to stem the oyster’s accelerating decline.

Pre-construction of the 60-acre reef in Copano Bay will begin in November with construction scheduled to start in winter, after which the project is expected to be completed within six to eight weeks. The reefs will be constructed using limestone boulders of various sizes, with the habitat reef laid out in rows 18-feet wide and 2.5-feet tall and the harvestable reefs arranged in 20-foot mounds up to 1.5-feet high.

Pending approval from Texas Parks and Wildlife, the reefs will close on November 1, 2019 and reopen November 1, 2021 to allow time for the oysters to colonize and reach market size. The portions of the reefs that will be open for commercial fishing are designed to be easily harvested using the dredge method.

The model used at Copano Bay will also inform an upcoming reef restoration project at Galveston Bay, which The Nature Conservancy is leading in partnership with the National Fish and Wildlife Foundation, Texas Parks and Wildlife and Galveston Bay Foundation.

“Oysters play an important role in supporting the overall health of the Gulf and contribute tremendously to the economic vitality of our fisheries,” said Toby Baker, Executive Director of the Texas Commission on Environmental Quality. “Gulf-wide, we all have a vested interest in ensuring the restoration and resiliency of the oyster population.”