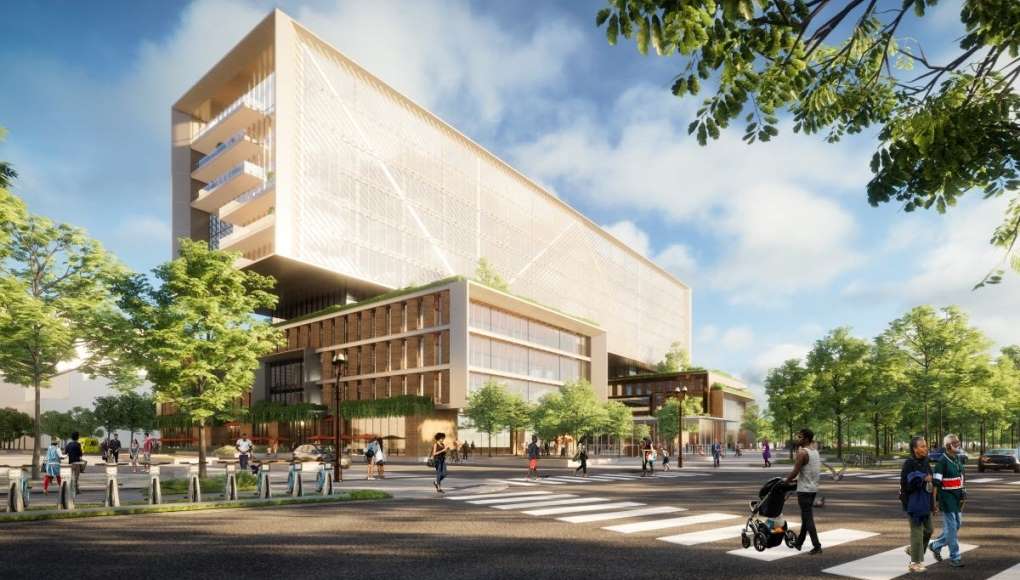 On July 21, 2021, the Chicago City Council approved the $3.8 billion redevelopment of the former Michael Reese Hospital site in Bronzeville. The derelict site will now be comprehensively revitalized by GRIT Chicago LLC into a mixed-use community.

“My administration is constantly seeking out and securing private-sector partnerships that will reinvigorate and strengthen our South and West sides’ business corridors, green spaces and more,” said Mayor Lori Lightfoot.

“GRIT Chicago’s redevelopment plan and infrastructure improvements will transform the former Michael Reese Hospital site into a thriving community hub where Bronzeville residents can shop, learn, eat and play. I look forward to seeing the completed site and how it improves the quality of the resources our neighborhoods are able to offer,” she added. 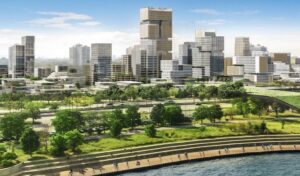 After more than 70 community meetings and public hearings, the “Bronzeville Lakefront” project is moving forward as a model of inclusive development through the City’s sale of the land, public infrastructure improvements, and zoning entitlements that were negotiated over the last four years.

The 48-acre site will be sold to local developer GRIT Chicago for $96.9 million and redeveloped with more than 7 million square feet of offices, mixed-income residences, new roadways, parks, and other public amenities. The project will directly create up to 20,000 temporary and permanent jobs, including participation by at least 30 percent minority- and 10 percent women-owned business enterprises.

At least 20 percent of the housing units will be priced as affordable. Owned by the City since 2009, the site’s sale will occur in phases through 2035, starting with an anticipated $8.8 million GRIT payment for approximately 3.1 acres of land near 31st Street and Cottage Grove Avenue.

GRIT’s initial purchase will include a $20 million option payment to secure the right for future acquisitions; a commitment to fund $25 million in improvements to nearby Chicago Public Schools facilities before the first 3 million square feet of space is constructed; and a commitment to provide $10 million in financing for an approximately 40,000-square-foot community center within the complex. 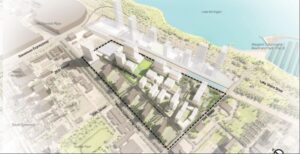 To be financed by the City through general obligation bonds, infrastructure construction will be completed by GRIT within three years. Bounded by 26th Street, the Metra Electric tracks, 31st Street, and portions of Vernon Avenue and King Drive, the former hospital site was cleared of most buildings starting 10 years ago.

“For the past five years, I have worked with the Michael Reese Advisory Committee, the City, and the Grit Development Team to make sure this project represents the best interests of the community. Countless meetings and negotiations have brought us to this moment,” said Alderwoman Sophia King, 4th Ward.

“The agreements in place will make sure the interests of the community are paramount to this development and that they survive for generations to come. Many of us at the table may not be here when this project is completed in the next 10 to 20 years, but the voices of the community will endure. Bronzeville Lakefront represents the best of what happens when large developments embrace a transparent community process. With a focus on life sciences, research, and environmental sustainability at the development, the project will be a new hub of innovation in this City. Chicago has always been the home of innovation and bold ideas. This project carries that torch well into the 21st Century,” she continued.

“This project has been years in the making and has brought many talented partners to the table, including the Michael Reese Advisory Council that has been very intentional about bringing benefits to the community,” said Michael Reese Advisory Committee Member Kimshasa Baldwin. “This community takes pride in the cultural richness we live in every day and the history we build upon. Bronzeville Lakefront, formerly the Michael Reese Development, will be a value add to the already strong and vibrant growth of Bronzeville.”

“As the only multi-billion-dollar development being planned for a community of color in Chicago, Bronzeville Lakefront will provide a strategic link between the growing central area and the systemically underinvested neighborhoods to its south,” Planning and Development Commissioner Maurice Cox said. “This is a fantastic, mixed-use repurposing of surplus City land that will provide inclusive public benefits for years to come.”

Vertical construction is expected to start with a $600 million first phase that will revitalize the southern end of the property with the 500,000-square-foot ARC Innovation Building anchored by Israel’s Sheba Medical Center; senior housing; a new park at 31st Street, and the adaptive re-use of the Singer Pavilion, the only remaining building from the hospital complex.

The $3.2 billion second phase will revitalize the northern end of the site with medical facilities, retail space, offices, residential buildings, a data center, and open spaces. Approximately 6,800 new residential units are allowed under the PD designation.

The initial land sales and infrastructure work are expected to start in early 2022.