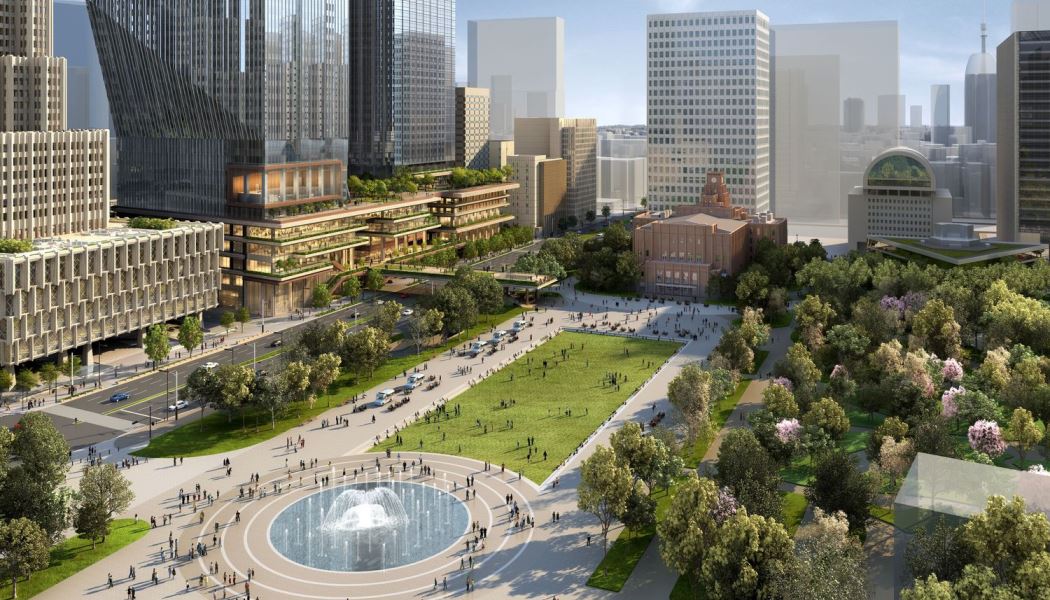 On March 28, 2022, PLP Architecture unveiled their plans for a new district redevelopment that would help revitalize the prestigious and culturally significant Uchisaiwaicho 1-Chome district of Tokyo, Japan.

The site connects to the 16-hectare Hibiya Park, and looks across to the Imperial Palace. 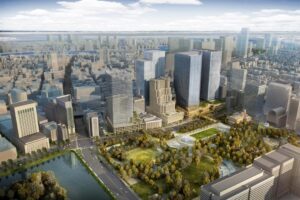 PLP is the master designer and placemaking strategist for the entire 1.1 million square meter redevelopment, which is the largest regeneration area in the metropolitan area of Tokyo. They are also the architect for two of the four mixed-use towers on the 6.5-hectare site.

The design is for a multi-stakeholder partnership, comprising ten of Japan’s most prominent companies. PLP guided the multi-disciplinary group in co-creating a new vision for urban development in Tokyo.

Each partner brought their experience in leading urban topics, such as ICT and telecoms from the Nippon Telegraph and Telephone Corporation, urban development from Mitsui Fudosan, energy from Tokyo Electric Holdings, and hospitality from the Imperial Hotel. 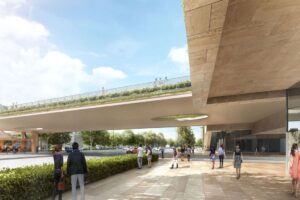 PLP’s masterplan provides a platform within the city that will facilitate collaboration between these different disciplines to develop future ideas.

In an approach that wisely reflects the reliable 3Re Strategy (repurpose, renew, reconnect) for revitalization, the Tokyo Cross Park Vision, key parts of the city and culture cross over, uniting to create a range of new urban experiences. 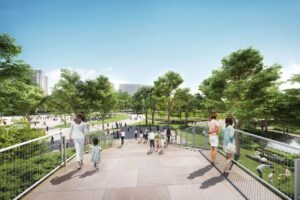 As the largest regenerative development project in the metropolitan area of Tokyo (a total floor area of 1.1 million square meters) the site connects to the 16-hectare Hibiya public park with four towers, a 31-metre-tall podium and a 2-hectare public plaza, together containing offices, commercial facilities, hotels, residential, co-creation spaces and an extensive public realm.

The Tokyo Cross Park envisions the growth of the capital’s green space, outwards from the Imperial Palace and Hibiya Park into the urban districts of the city. The new development has extensive green spaces and water, which will connect with the park through two pedestrian ‘park bridges’.

This link creates a 32-ha human-centric and walkable environment rich in wildlife, water, and public meeting spaces aimed at bringing a focus on wellbeing, quality of life, sociability and connection to nature. 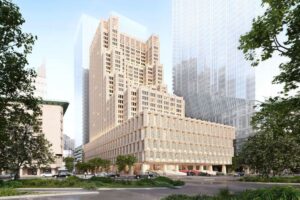 As well as connecting to nature, PLP has designed to encourage the city’s top talents – people, institutions and companies – to engage in this new district.

A program of hyper-mixed functions, amenities and co-creation spaces provide the framework for the “best of Tokyo” to come together and envision how the next generation will work, play and live.

The district will be supported by advanced digital infrastructure, including digital twins, which will enable it to become a cross-disciplinary third-generation smart city. 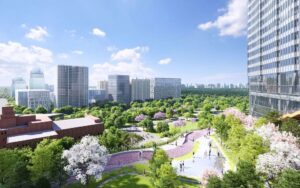 This technology will be used to enhance the offerings of the district by constantly evolving to suit the needs of individual users, such as through progressively optimizing the wellbeing experience.

The Tokyo Cross Park Vision hopes to feature the best of Japanese hospitality. The wide variety of premium hospitality offers are the result of collaboration between stakeholders.

In addition to the rejuvenation of the new Imperial Hotel main building, a separate small super-luxury hotel and a wellness-focused hotel will also both open.

Rental housing and serviced apartments will introduce a new premium level ‘live’ offer into the area. 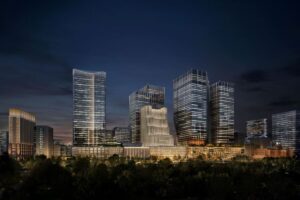 The project aims to achieve zero CO2 emissions with a centralized masterplan-wide energy strategy at the time of completion.

Adding to this, by introducing new environmental technologies such as carbon absorbing technology, the masterplan aims to be carbon negative in the future.

PLP Architecture was master designer and placemaking strategist for the development, as well as architect for two of the four towers.

Also working on the architecture within the masterplan are ATTA for the North Tower and Nikken Sekkei for the South Tower.

All images courtesy of PLP.