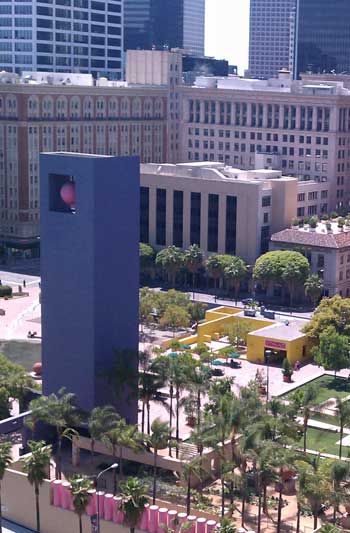 Then, in 1994, a $14.5-million renovation by Mexican architect and landscape architect Ricardo Legorreta and American landscape architect Laurie Olin, FASLA, was completed. The bright, boxy post-modern design, which is in place today, notably features a 10-story purple bell tower, fountain, and small enclaves of trees.

And today, AEG Corporation, which created the massive Staples Center and L.A. Live spaces in downtown Los Angeles, has sponsored a new design competition to remake the 5-acre space once again.

According to the competition organizers, a new park is needed for a new downtown Los Angeles booming after decades of decline. The organizers says the transformation of the area is due to the city’s “adaptive reuse ordinance,” which has allowed developers to transform great old buildings in the historic core of downtown into commercial and residential space.

Nearby, cool kids of all ages congregate at the Ace Hotel. And the Grand Central Market is now drawing others beyond the Latino community who have historically made up the district. Hotels and shops have popped up to serve both tourists and new waves of locals who have moved in. In 2000, downtown Los Angeles’ population was a mere 20,000; by 2010, it had doubled to 40,000.