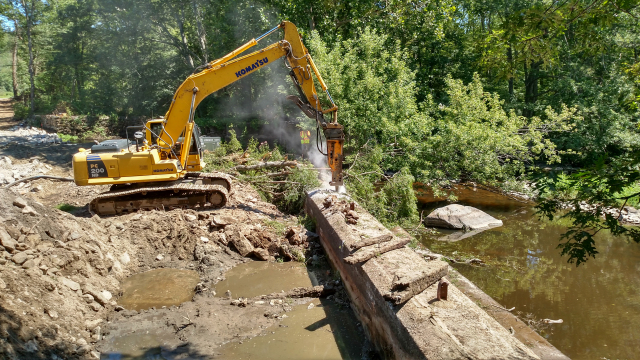 Next spring, for the first time in over 100 years, all types of migrating fish, from trout to shad to alewife and blueback herring, will be able to swim up the entire length of the Pawcatuck River to reach their historical spawning grounds.

The final piece in a series of projects that has been in the works for decades and has cost many millions of dollars will be completed in a couple of months when a rocky fishway is completed in place of Bradford Dam, a rock-and-timber structure that was built in the 1880s and demolished earlier this summer.

When the work is done, three of the six major dams on the Pawcatuck will be gone. The three others all have fishways, including Potter Hill Dam, where a fish ladder was recently cleared of sand and silt that had been obstructing it.

“It’s a huge impact, and it’s been a long road to get here,” said Scott Comings, associate state director of The Nature Conservancy, which is leading the Bradford Dam work.

Reaching this point has taken the efforts of a whole host of groups that, along with the Conservancy, include the Wood-Pawcatuck Watershed Association, the U.S. Fish and Wildlife Service, and the Rhode Island Department of Environmental Management.

For the past several years, The Nature Conservancy’s Rhode Island chapter has worked with the Service to give nature half a chance on the Pawcatuck River. Winding 34 miles through southern Rhode Island, the river abounds with wildlife, from osprey to otters and herons to herring. It’s hard to beat the meandering Pawcatuck River for summertime family paddling. Scientists describe it as the last and best semi-wilderness river system in the state.

Nevertheless, the lower reaches of the river were choked by the White Rock Dam. Two miles upriver from a municipal boat ramp in downtown Westerly, R.I., the dam, a legacy of the Industrial Revolution, blocked kayakers and migrating fish.

Although no longer serving a commercial purpose, the 6-foot-high concrete wall diverted the river into a long bypass canal. In spring, the river rushed through the canal with tremendous force, creating dangerous conditions for inexperienced kayakers. It also prevented all but a handful of river herring from migrating upstream to their traditional spawning grounds.

In 2015, the Conservancy and the Service, supported by federal funding for Hurricane Sandy recovery and resilience, came together to remove the dam and close the bypass canal. Two years later, the river is back on its natural course. Paddlers and fish are passing easily, and local flooding has been reduced. The lower Pawcatuck River has been set free for the first time in 250 years.

Featured photo of the removal of White Rock Dam by The Nature Conservancy.