Governing bodies throughout the country build event centers, meeting halls, and arenas each year, but currently there is an abundance of new redevelopment projects of this type.

Facilities that are being rebuilt, redeveloped, and/or expanded are local treasures. They serve as rallying points for community exchanges, tourist attractions, and culture developments. They also generate tax revenue for ongoing economic projects.

Most governments use some kind of specific tax funding to cover the expenses. Bond elections also provide funding and currently there is no shortage of federal funding for these projects.

In Texas, a state law allows cities to use hotel occupancy taxes for sports arenas, convention centers, and municipal parks projects. Most other states have similar statutes.

One large project in Texas will be the expansion of a convention center in Dallas. Currently, the project, which will carry a $1 billion price tag, is in the planning phase.

As soon as that work is completed, the current Kay Bailey Hutchinson convention center will be demolished and a newer, expanded version will be constructed.

Projects such as this usually incentivize other redevelopment projects nearby and that is likely in this case.

Not to be outdone, city leaders in nearby Fort Worth, Texas are also launching a convention center expansion and renovation. City leaders have continually enhanced the downtown area and it serves as a showplace for other city officials to visit for discussions about their own revitalization projects.

This new project has $52 million in funding allocated for the initiation phase and another $450 million for construction in the second phase. Plans indicate that the project will launch about mid-2023. It will have several phases and include the creation of a state-of the-art food and beverage facility and numerous new commercial loading docks.

A realignment of an adjoining street is planned so the facility has space to be scaled for a hotel addition in the future. The expansion of the convention center will provide 60,000 square feet of ballroom and exhibit space and dynamic meeting rooms. A completion date of 2026 is planned. 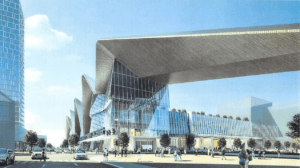 In Cincinnati, Ohio, another $200 million convention center redevelopment project will be launched in 2023. This initiative will be overseen by a partnership between city and county officials, and it will have many phases and numerous facets.

The partners have developed a plan to redevelop Cincinnati’s downtown convention center district. A primary focus will be on redeveloping the city’s Duke Energy Convention Center to provide approximately 80,000 square feet of newly redesigned meeting space. The partners also are preparing for future expansion projects in the district.

City leaders in Las Vegas, Nevada will launch a $165 million civic plaza redevelopment project in 2023. A new $70 million civic center facility will be constructed, and the surrounding plaza will be enhanced.

A six-story office building with approximately 183,000 square feet of space will sit inside the redesigned plaza and the whole area will be designed as a year-round venue for major outdoor events in the city. The initiative will attract tourists, generate tax revenue, provide community benefits, and spur economic vitality.

A Morgan Square redevelopment project in Spartanburg, South Carolina with a $100 million cost estimate will be launched in 2023. The project will be designed to revitalize an outdoor venue and gathering space in the very heart of the city.

Plans call for an abundance of retail and dynamic event space designed for visitors to enjoy. The redevelopment project’s design stage, which began in November, is forecasted to take six to nine months.

A total price tag is still being finalized, but a similar redevelopment designed by the same team three years ago was budgeted for approximately $100 million.

Morgan Square is a focal point for outdoor events, including Music on Main Street and a popular destination for families. The nearby shops and restaurants are a coveted attraction, and the plaza will be enhanced in numerous ways.

Another $100 million redevelopment project in the heart of Asheville, North Carolina will be led by a multi-jurisdictional partnership. The project will center on a reimagined Pack Square Plaza.

This longtime community venue is one of the most centralized public meeting spaces in the western region of North Carolina. Community leaders responsible for the project say it will support social and economic equity. To ensure that, an ongoing community engagement initiative is underway and will continue into spring 2023. Input from citizens will go directly to the design professionals.

A construction launch will be announced as soon as the planning phase is completed.

Visionary planners and design experts are in high demand. As infrastructure is improved and public assets are upgraded, many cities and counties are taking advantage of the current availability of funding to ensure that regional economic goals are addressed.