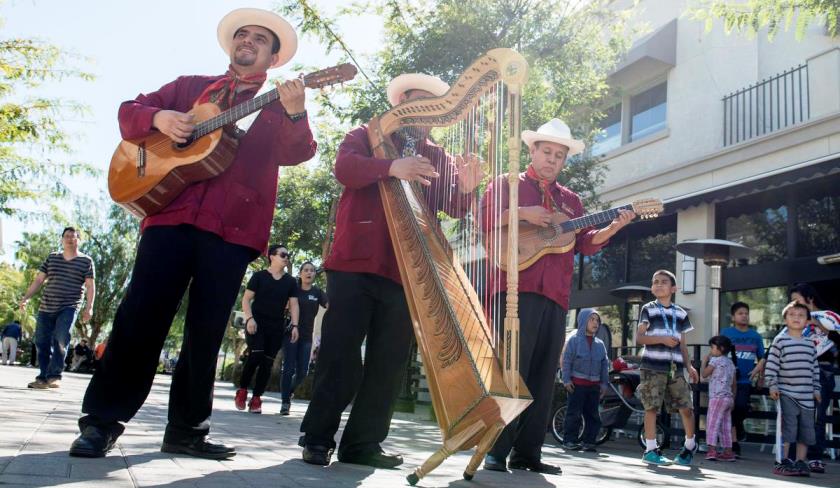 The Trio Jarocho musicians serenaded workers inside a Mexican menswear boutique and patrons walking out of the trendy Playground restaurant in downtown Santa Ana, California.

They sang “La Bamba” to spectators across the street from the new artisan 4th Street Market and posed for photos with passers-by. A “payasito” (clown) joined in and danced with nearby children.

“This is what’s been missing from ‘La Cuatro,’ ” one spectator said in Spanish. “The joy.”

The roving musicians signal a shift in sentiment in downtown Santa Ana as “hipper” establishments open along a stretch of the city’s downtown. For generations, Santa Ana, California’s downtown has been a marketplace for primarily Spanish-speaking immigrants — many of them new arrivals from Mexico who came to shop for the kinds of goods and services they could find in their homeland.

As on Broadway in downtown Los Angeles, it was businesses catering to Latino immigrants that kept 4th Street financially viable after the white population left decades before.

But since the Great Recession hit, many of these businesses have struggled to stay open. The clientele they had long catered to, already living on meager means, struggled to pay rent and put food on the table. Some returned to Mexico.

“Our world changed in 2008,” said Claudia Arellanes, who owns Mega Furniture on Fourth Street with her husband, Arturo Arellanes. “We (have now) modernized ourselves, and I think that’s a good thing. Nobody is displacing me. I displace myself if I don’t adapt. One has to adapt to change in order to survive.”

“We want the city to allow us to be who we are,” continued Arellanes. “This place is for everyone. Everybody is welcome to feel the flavor of Santa Ana.”

But community organizers argue that outsiders, in coordination with city officials, are systematically attempting to erase an immigrant enclave in a city that is almost 80% Latino by bringing in gourmet restaurants and hipster shops and pricing longtime residents out.

“Change may be normal, in a general sense, but gentrification is not. Gentrification is often a process that involves private-public partnerships. In Santa Ana, this is the case. Change was engineered,” said Erualdo Gonzalez, an associate professor of Chicano studies at California State University – Fullerton who studies gentrification in Santa Ana.

See 2015 article by Alejandra Molina in the Orange County Register.