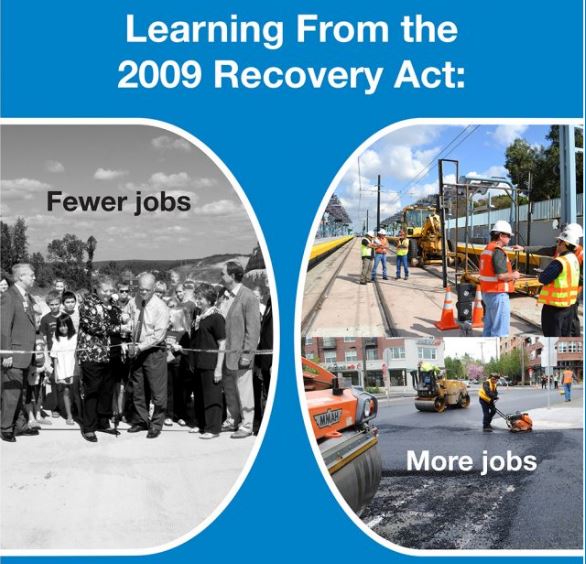 As we tried to claw our way out of the Great Recession over a decade ago, Congress gave states billions in new funding for transportation capital projects in the American Recovery and Reinvestment Act, better known as the stimulus. We could soon see something similar happening again—the president and many congressional leaders have indicated that they want infrastructure to be a major part of a future economic recovery package.

To help Congress and the public learn valuable lessons from this last attempt to create jobs and support economic recovery through infrastructure investments, Smart Growth America and Transportation for America have released a new report.

Contained within are six lessons learned from the 2009 stimulus and six recommendations for the future, culled from our deep experience evaluating the impact of the Recovery Act over 10 years ago.

As Congress and the nation debate the next phase of stimulus, we can and should benefit from the lessons we learned from the last one: Some kinds of spending create more jobs, faster, than others. Scores of states chose to ignore their repair needs (which actually create more jobs) in favor of expensive new roads (which create fewer jobs than almost every other type of spending). And limiting spending to capital projects only (leaving out transit operations as the Recovery Act mostly did) eliminates one of the most productive forms of spending, while also creating future costs and slowing the speed of economic recovery.

If Congress does decide to devote billions of dollars toward infrastructure in a bid to get people moving and people working, they need to direct federal infrastructure dollars to the types of projects that create what we need. In the face of unprecedented unemployment, that means projects which create the most jobs the fastest, and those that connect people to as much economic opportunity as possible. These are not goals that the existing federal program is well calibrated to fulfill. Blindly putting new money into the existing program would just repeat one of the biggest mistakes from 2009.

The findings of the report linked to below explain how prioritizing investments in road repair and public transit—especially operations and repair—would produce the most jobs.