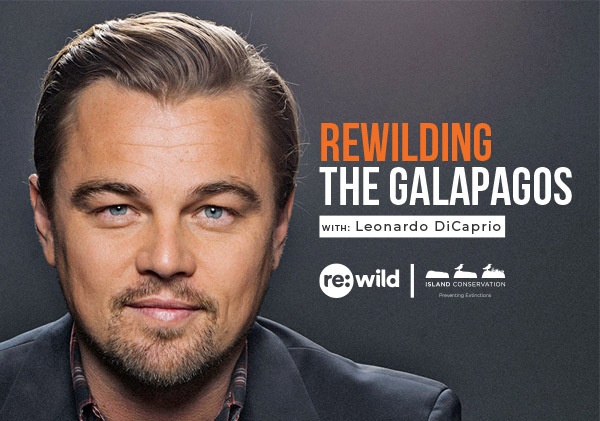 On May 17, 2021, an exciting new global environmental organization called Re:wild was launched. It’s poised to help build a world in balance with the wild, starting with its first major commitment: working with the Galapagos National Park Directorate, Island Conservation, and local communities, on a bold initiative to protect and rewild the Galápagos.

The initiative, building on the decades of work by local partners and communities, aims to rewild the Galapagos Islands and beyond at a scale never before attempted–across all of Latin America’s Pacific archipelagos, from Mexico down to Chile. 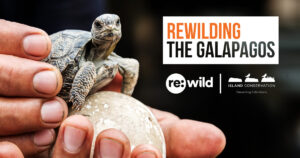 “These kinds of partnerships that leverage technical, social and financial innovations, are exactly what we need around the world to restore the health of our planet,” said Marcelo Mata Guerrero, Ecuador’s Minister of Environment and Water.

“With Ecuador as one of the 17 most biodiverse countries on the planet, we have an opportunity here to demonstrate what a truly effective model looks like for the protection and restoration of our shared wildlife and wildlands–the immune system of our planet, protecting all life on Earth, including people, from the effects of climate change and emerging disease,” he continued.

Leonardo DiCaprio, who serves as a Re:wild founding board member, announced the Galapagos initiative and funding commitments by turning over his social media accounts for the day to Paula A. Castaño, a wildlife veterinarian and island restoration specialist with Island Conservation who lives in the Galapagos Islands and works across Latin America.

Castaño is leading the efforts to reintroduce a number of endangered species back to their wild homes, in collaboration with the Galapagos National Park, local communities and other partners. Amplification of Castaño’s voice on social media is a preview of how Re:wild will bring international attention and resources to scale the work of environmental heroes.

“Time is running out for so many species, especially on islands where their small populations are vulnerable and threatened. Galapagos’s pink iguanas, Floreana mockingbirds and other wildlife may soon be lost forever without action. We know how to prevent these extinctions and restore functional and thriving ecosystems—we have done it—but we need to replicate these successes, innovate and go to scale,” Castaño said. “We need catalytic investments like the one announced today to replicate our successes in the Galapagos and elsewhere.”

Castaño’s work exemplifies the kind of passionate commitment of the local organizations and communities that have been working tirelessly to protect and restore the Galapagos Islands, which face multiple threats. Introduced rats and other invasive mammals have decimated populations of birds and reptiles. Invasive species and industrial fishing have damaged these fragile environments, threatening the wildlife and ecosystems that keep the local communities and the planet healthy.

Local efforts to protect and restore ecosystems, prevent the introduction of invasive species, return endangered species to their wild homes and bolster the economy through ecotourism will help guide the new region-wide approach.

“When I travelled to the Galapagos Islands, I met with Paula Castaño and other environmental heroes in Ecuador working day in and day out to save one of the most irreplaceable places on the planet. I’m excited to share her team’s work and to support the longstanding effort to protect and restore these iconic islands, alongside the team at Re:wild,” said Leonardo DiCaprio.

“Around the world, the wild is declining. We have degraded three quarters of the wild places and pushed more than one million species to the brink of extinction. More than half of Earth’s remaining wild areas could disappear in the next few decades if we don’t decisively act. Fortunately, conservation leaders like Paula are showing us that it is not too late to reverse this alarming trend. Re:wild offers a bold vision to amplify and scale the local solutions being led by Indigenous peoples and local communities, nongovernmental organizations, companies, and government agencies, to help increase their impact around the world. The environmental heroes that the planet needs are already here. Now we all must rise to the challenge and join them,” he added.

The Galapagos initiative aims to bring together the necessary private-public support–including governments, foundations, individuals, corporations and organizations–to meet the scale of the threats to the Galapagos.

“This new initiative is a great opportunity for the Galapagos to be a global leader in rewilding, protecting and restoring our natural resources not only for the people of Ecuador, but for the people of the world,” said Henry Cobos, the mayor of San Cristóbal.

“We have committed local and global partners, the buy-in of local communities who are helping lead these efforts, and we know how to bring back the wildlife and wildlands we’ve lost and how to protect the rest. We are grateful to Re:wild and Leonardo DiCaprio for the help. We hope this initiative will also inspire the global community–including philanthropists, world leaders, and individuals globally–to help us in our endeavor to rewild the planet’s cradle of evolution, the enchanted Galapagos Islands,” he added.

The $43 million in support will fund Galapagos projects including:

“We invite others to join us in this effort to not just protect but to rewild the Galapagos,” said Danny Rueda, director of the Galapagos National Park Directorate, which manages both the marine and terrestrial protected areas.

Across the region, over the next 10 years the broader initiative intends to:

In order to reverse the climate crisis and ecosystem collapse, we need to focus on a ‘technology’ that took billions of years to refine, that is free, and that sustains us every single day: nature, in its most wild form,” said Wes Sechrest, Re:wild chief scientist and CEO. “Where better to begin than the Galapagos, which, as the first-declared World Heritage Site, is among the most extraordinary wild places on the planet. Re:wild’s work with partners is hope in action–from Darwin’s laboratory to Australia’s wildlands to the Congo forests of Central Africa.”

Re:wild is the latest organization linked to DiCaprio’s environmental activism. DiCaprio has been a longtime champion of global environmental issues including climate change, wildlife conservation, access to clean water, protecting biodiversity, marine conservation and supporting Indigenous communities. To date, through his philanthropic efforts, DiCaprio has provided more than $100 million in grants to a variety of programs and projects. In addition to his work with Re:wild, DiCaprio also serves on the boards of Natural Resources Defense Council, International Fund for Animal Welfare, and Earth Alliance where he serves as Co-Chair.