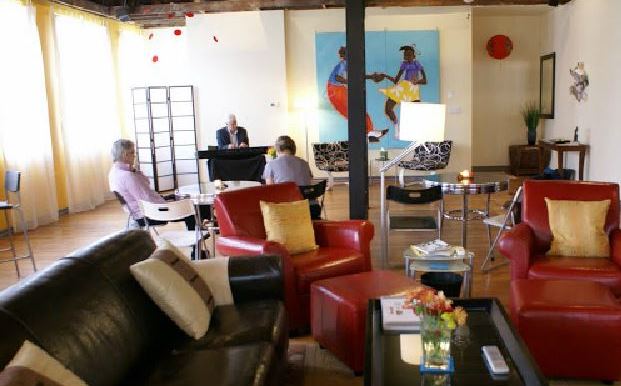 Many folks don’t realize that the similarity between the words “restaurant” and “restoration” is no accident. In the 18th century, few urbanites had properly-equipped kitchens at home. So they tended to from communal platters laid out for inn guests, or bought oysters and other easy-to-eat comestibles from street vendors.

Legend has it that this started to change when Monsieur Boulanger around 1765, opened the world’s first modern-style restaurant in Paris, serving only soups. Its sign proclaimed, “Boulanger débite des restaurants divins” (“Boulanger sells restoratives fit for the gods”). At the time, the word “restaurant” referred to the rich broths that were promoted as being able to restore one’s health. 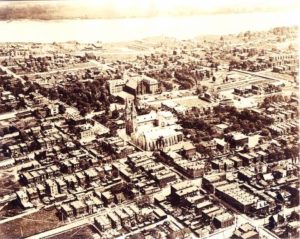 Skip to the present day (well: nine years ago, anyway). When the husband and wife team of John Chen and Caya Aufiero decided to purchase a beautiful 1929 furniture store, the Liermann Building, in a struggling business district, opening a restaurant was the last thing on their minds. But they did, and it’s only fitting that revitalization–restoring the health and vitality of the neighborhood–should be a major part of its mission

They wanted to provide the neighborhood with a common meeting space to foster community, so they leased the space out to two businesses tenants. When both businesses went under in less than a year, the duo knew they needed to create their own vision of revitalization.

The product was Urban Eats, a casual and cool neighborhood restaurant with a mission of urban renewal through healthy, affordable food. Urban Eats has now been in operation for over nine years, with three locations that bring healthy food to urban food deserts, attract new businesses and residents to the neighborhoods, use art and music to attract a variety of customers, provide a gathering place for various diverse purposes and serve as vibrant community anchors. 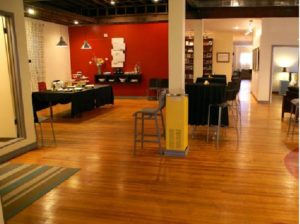 Through a system-driven, people-focused, technology-enabled operating system, Urban Eats aspires to be a “market maker” in urban communities where other food options are lacking. They use their catering service, box lunch program and events to drive sales, which allows them to keep the retail cafe doors open in struggling neighborhoods that would not support a retail location on its own.

Their food is fresh and affordable, creatively crafted with diverse ethnic influences. To stay true to their core mission, they incorporate organic foods, often using foods from their own garden. Urban Eats also offers cocktail, draft beer and espresso bars to create a relaxing place to hang out.

The history of the Liermann Building, where Urban Eats Café now lives, and the entire intersection of Meramec and Virginia, are a story of urban regeneration in a historic South St. Louis neighborhood.

From Yiddish speaking immigrants to the American Furniture Company, we are privileged to be housed in a slice of St Louis city history. The story opens with Henry Liermann, where it all began in the late 1800s, and continues to the next generation, the Lasky family.

Be a part of our present incarnation as a mixed use building, housing Urban Eats Café, SolutionWorks Homes, E-Zone (business incubator), The Urban Arts Collective and a city loft residence, in the heart of the Dutchtown community.