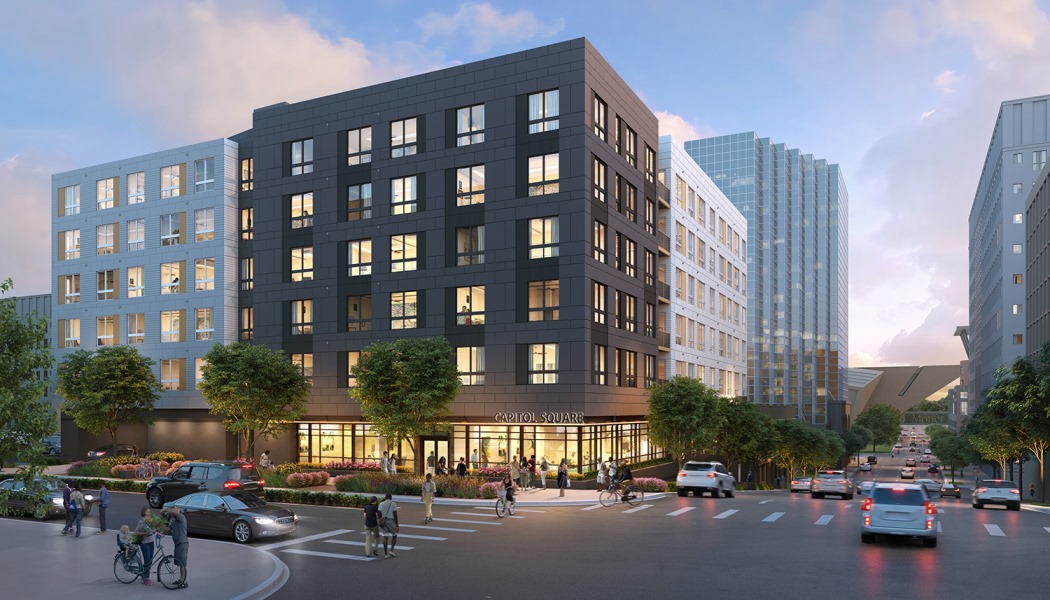 On April 13, 2021, KTGY—a full-service architecture, branding, interior and planning firm focused on residential, hospitality, mixed-use developments and neighborhood revitalization—announced that construction is underway to convert the site of two dilapidated warehouses into the Capitol Square Apartments in downtown Denver, Colorado.

Neither structure has “had meaningful income or tenancy for more than 20 years,” according to documents presented to the Colorado State Land Board in late 2018, which owned the buildings along with the large parking lot to the south. The redevelopment partners signed a 50-year ground lease with the Land Board. The companies were awarded tax credits for the project in May 2019.

The redeveloped, transit-friendly downtown site will soon provide 103 income-restricted residential units one block from the Colorado State Capitol Building on the corner of 13th Ave. and Sherman St., near the Central Business District of Downtown Denver.

Redeveloped by Denver-based Mile High Development and Chicago-based Brinshore Development, the new six-story, state and city-supported multifamily rental community is expected to be completed in 2022. 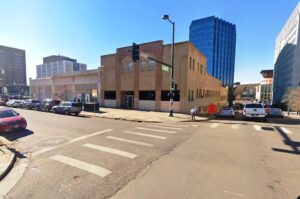 “Capitol Square exemplifies the kind of innovative public-private partnerships that can be utilized to deliver quality affordable housing in walkable, amenity and transit-rich neighborhoods such as Capitol Hill. Brinshore is pleased to partner with Mile High Development and KTGY to bring this project to fruition,” noted David Brint, founding principal, Brinshore Development, LLC.

According to Willis, the modern, multi-generational development takes its design cues from the surrounding neighborhood. The residential building’s clean lines relate to the adjacent civic buildings and intentionally contrast to the highly detailed and ornate historic capitol building.

“We live and work in this wonderful community and it is truly exciting to have a meaningful role in bringing new, high-quality affordable housing in an amenity-rich neighborhood near transit and employment,” said Terry Willis, AIA, LEED AP, a principal in KTGY’s Denver office.

“Attracting both young workers and empty nesters looking for a walkable, urban home, Capitol Square features unit sizes that address the ever-increasing need for affordability in the downtown core,” he added.

The steeply sloped site provided designers the opportunity to create a basement parking level, saving on construction excavation costs. The U-shaped design opens the interior units and courtyard to views of the Denver Art Museum and the mountains beyond, while encouraging social connections. 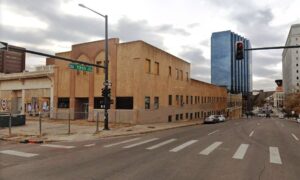 “KTGY delivered a great design for Capitol Square, which was a very positive factor in generating neighborhood support, as well as generating eventual support from the lenders (US Bank and Freddie Mac), tax credit investor (US Bank), and our gap lenders, HOST (City of Denver) and CDOH (Colorado Division of Housing),” said George Thorn, president of Mile High Development.

“The overall design concept was also very important to gaining support and approval from the Colorado State Land Board (CSLB), the owner of the ½-acre site, to enter into a long-term land lease with the developer team. We felt from the initiation of our concept for an affordable housing development on this site that Capitol Square’s location in the shadow of the State Capitol sent a very positive message to the community that this type of project would be well received by the state, city and other civic leaders, and the neighborhood, and that has proven to be the case,” added Thorn.

Capitol Square’s amenities include a leasing office, community space and fitness room at ground level as well as a landscaped outdoor terrace at the second-floor courtyard. Parking will be provided for 68 vehicles at the ground and basement levels. The project will seek Enterprise Green Communities certification.

All apartments are income-restricted exclusively for households earning 40% to 80% of the area median income (up to $54,950 for a single-person household). The building includes 73 one-bedroom units and 30 two-bedroom units.

“Many residents in this Capitol Hill neighborhood walk to work in downtown Denver or take advantage of the Broadway/Lincoln as well as 12th Avenue and Colfax transit corridors for bus service. It is only a short walk (three blocks) to Civic Center Station and connection with regional buses, the Downtown Circulator Bus to Union Station and the 16th Street Mall Shuttle,” said Willis.

The City and County of Denver provided $1,545,000 in financing from the Affordable Housing Fund toward the $33.9 million project. The development also received other public finance funds from the Colorado Department of Local Affairs. Colorado Housing & Finance Authority provided 4% federal and state tax credits and is issuing the bonds for the building.

The Colorado State Land Board has entered into a long-term lease with the developers, with lease proceeds supporting the Land Board’s mission to raise funds for education and the K-12 BEST program.

KTGY is also working with Brinshore Development in Salt Lake City on the design and development of two new affordable residential rental communities including 255 South State Street, which is currently under construction in Salt Lake City’s downtown core.