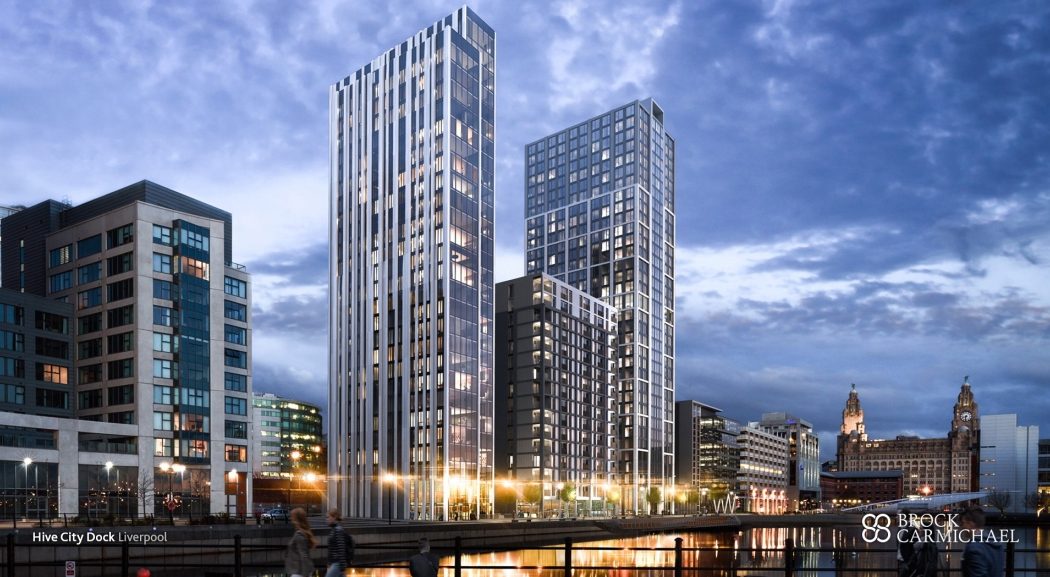 Liverpool Waters is a large-scale £5.5 billion redevelopment that has been proposed by developers Peel Group in the Vauxhall area of Liverpool, Merseyside, England. 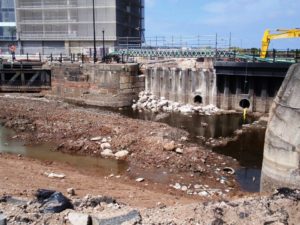 It is the first dock in Liverpool to be surrounded by walls to prevent theft, and was originally built to serve sailing vessels on their way to North America. In the 1840s it moved into the high-value, low-bulk East Asia and South American trades, such as coffee and spices.

In 1865, the ship Mimosa set sail from the dock containing 153 Welsh settlers destined for Patagonia. Around 50,000 people in Argentina today have Welsh heritage deriving from that group of 153 settlers.

In 1895 Liverpool Riverside Station was opened, situated between Prince’s Dock and the River Mersey. For transatlantic travelers, it meant that they only had a short walk to or from the ocean liners berthed at the Princes Landing Stage. In 1910s transatlantic passenger traffic was based on a landing stage in the river and Princes Dock was the center of the Irish trade.

A passenger-only service (Liverpool – Dublin) continued to use Prince’s Dock until 1969. Ferry services from Prince’s Dock finally ended in November 1981 when P&O Ferries closed their Liverpool – Belfast overnight service. The docks were subsequently closed to shipping, and were partly filled. It has remained derelict ever since.

Chris Bolland, managing partner at architects Brock Carmichael said: “Our experience designing many of the most iconic buildings built in Liverpool over the last 42 years meant we were able to work with Peel, YHG, and the City to bring their vision of city waterside living to life.” 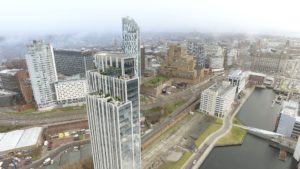 Liverpool Waters is spearheading the resurgence of the docks area with plans for tower blocks that will rise above the skyline, where cranes once dominated. One of those developments planned is Your Housing Group’s Hive City Docks.

It will deliver 278 private rental apartments, a roof-top premium restaurant, a ground-floor bistro and bar facilities, and a 24-hour concierge service. Hive City Docks will take two years to build, and will be delivered under Your Housing Group’s successful Hive brand, its private rented sector arm that has already delivered a scheme in Warrington’s Church Street.

Liverpool Mayor Joe Anderson has previously said: “High quality housing is essential for economic growth. Developments like this, in a stunning waterfront location, are crucial if we are to attract and retain the kind of talent which will fuel that growth.”

Yvonne Westhead-Fyles, project lead for Hive, said: “Hive City Docks is a hugely exciting and innovative project for us and our Hive brand.”

Lindsey Ashworth, development director at Peel, added: “Hive City Docks is one of a cluster of three residential towers that will connect the River Mersey and Princes Dock with the City centre. This beautiful building design reaches the high quality standards required by Liverpool Waters and is unique in so many ways as demanded by such a dynamic location.”

The Liverpool Waters redevelopment will transform a series of derelict dock spaces at Central Docks, where many of the docks are in a UNESCO World Heritage Site. This is an area north of Liverpool’s historic Pier Head where an international cruise terminal is planned and cruise ships are already visiting, including the QE2 and its sister ships. Since 2012, the project has enjoyed “enterprise zone” status as part of the Mersey Waters Enterprise Zone. 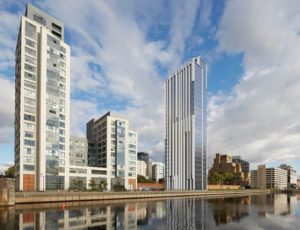 Liverpool Waters will transform the city by regenerating a 60-hectare site to create a world-class, mixed-use waterfront quarter in central Liverpool.

The development is planned to create at least 17,000 full-time jobs and 21 million square feet of new commercial and residential floor space including 23,000 apartments and four hotels. The tallest towers are proposed to be over 30 stories high.

Hive City Docks will comprise 31-stories, which will house 278 apartments with amenities including a restaurant on the top floor. The landmark waterfront tower represents a £55 million investment and is expected to take two years to construct, beginning in 2018.

John Cogbill, chief operating officer at Your Housing Group, said: “It’s great to see Peel’s Liverpool Waters masterplan becoming a reality and that high quality new homes are being prioritized as part of the regeneration. Hive City Docks will be an iconic development which complements the spectacular setting. The building has been designed to meet the needs of today’s rental market with world class facilities including around the clock concierge services, in-apartment technologies and a premium rooftop restaurant.”

But Brock Carmichael’s regenerative activities aren’t limited to Britain. In Kowloon, Hong Kong, they renovated and repurposed a run-down 21-story building into a mixed-use redevelopment for the Hong Kong Young Women’s Christian Association. The new facility will serve all ages within the local community and beyond.

A dramatic re-imagining of this dilapidated 21 story tower, in a city where space is at a premium, has created a new 21st century “vertical village” for the Young Woman’s Christian Association.

The Hong Kong Young Women’s Christian Association was founded in the 1950’s and relocated to this current site in 1976. The increasingly dilapidated condition of the facilities, restrictive layout and inadequate space have affected the service offered. This project has addressed this through a comprehensive refurbishment and adaptation.

Brock Carmichael acted as project managers for this innovative £35 million, 4-year building refurbishment and regeneration project. They upgraded and adapted this aging 21 story tower to provide new assisted living, education and social services facilities across all generations of society for the people of Kowloon.

All images are courtesy of Brock Carmichael, unless otherwise credited.