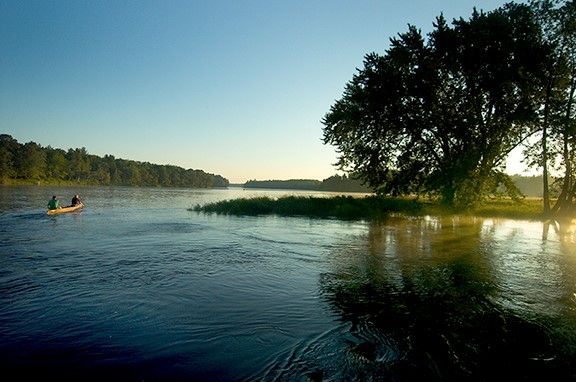 The Penobscot River Restoration Project is one of the largest, most creative river restoration projects in our nation’s history.

The goal of this vast public-private-trabal partnership is to restore 11 species of sea-run fish to the Penobscot River of Maine, while maintaining energy production.

Successful implementation of the project will revive not only native fisheries but social, cultural and economic traditions of New England’s second largest river- the Penobscot.

The Penobscot River Restoration Trust is the non-profit responsible for implementing the restoration effort, including purchase of the Veazie, Great Works, and Howland dams in 2010. The Penobscot Trust removed the Great Works Dam in 2012, the Veazie Dam in 2013, with the last step being decommissioning and building a bypass around the Howland Dam.

Combined with additional fish passage enhancements at four other dams owned by Black Bear Hydro, the project will significantly improve access to nearly 1000 miles of habitat for sea-run fish. Energy enhancements at Black Bear Hydro facilities means energy production will remain at least the same as when the Project began, and likely increase. 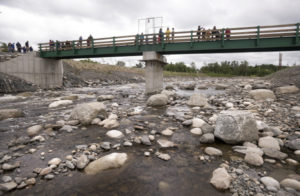 On June 14, 2016, hundreds of project supporters gathered at the confluence of the Piscataquis and Penobscot rivers to celebrate the official completion of the Penobscot River Restoration Project.

The latest milestone: The construction of a fish bypass — the “big river” that was built around the Howland Dam, in Howland, Maine.

That work opened access to more than 1,000 miles of river, stream and lake habitat for fish that migrate between salt and fresh water. An ambitious project, the restoration took more than 16 years and cost $60 million to complete.

This project demonstrated an unprecedented level of collaboration. Partners in the Penobscot River Restoration Project include the Penobscot Indian Nation, American Rivers, Atlantic Salmon Federation, Maine Audubon, Natural Resources Council of Maine, and Trout Unlimited, working with the U.S. Department of Interior, the State of Maine, and PPL Corporation, the dam owners, negotiated a final agreement that will redefine the Penobscot River over the coming years. The Nature Conservancy joined as a full partner in 2006.

The agreement, filed with the Federal Energy Regulatory Commission (FERC) in June of 2004 lays out a roadmap for restoring the river that will:

This unprecedented and innovative agreement allows:

The final agreement was signed by PPL Corporation; the U.S. Department of Interior’s Bureaus of Fish and Wildlife, and Indian Affairs, and the National Park Service; four State of Maine natural resource agencies â€“ the State Planning Office, the Department of Natural Resources, the Department of Inland Fisheries and Wildlife, and the Atlantic Salmon Commission; the Penobscot Indian Nation; American Rivers; Atlantic Salmon Federation; Maine Audubon; Natural Resources Council of Maine; Trout Unlimited; and the Penobscot River Restoration Trust â€“ a Maine non-profit corporation established in May 2004 to implement the restoration project.