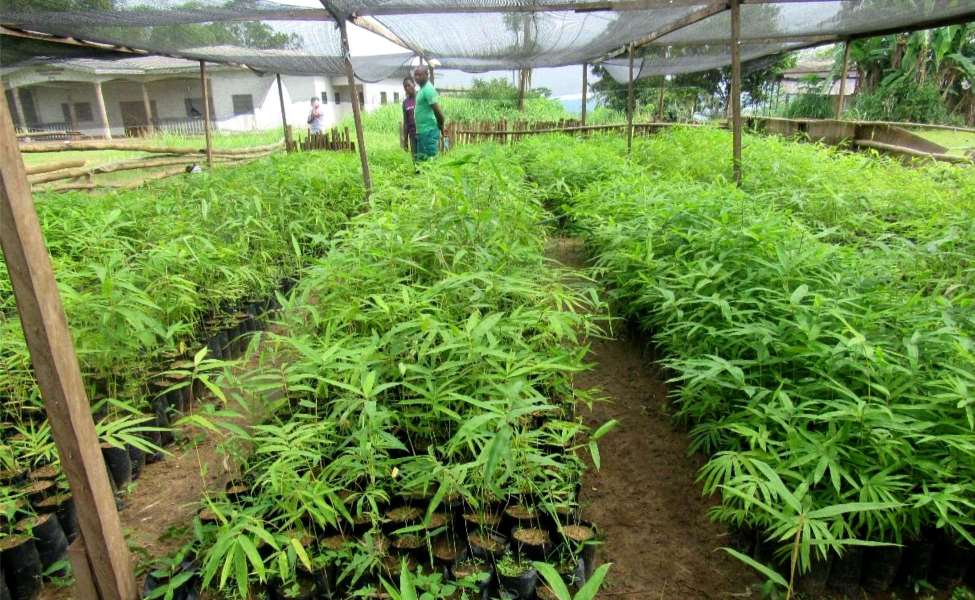 As unregulated expansion surges in the nation of Cameroon, IUCN‘s The Restoration Initiative (TRI) is making some regenerative headway.

The TRI Cameroon Project is helping to restore and preserve the ecological integrity of the Lake Ossa Wildlife Reserve in Cameroon, and help revitalize the communities that depend upon it.

The Lake Ossa Wildlife Reserve in Cameroon, an internationally recognized ecological wonder, is nestled within a mosaic of rainforest, freshwater swamp forests and large commercial farms.

Established in 1948, the 4 000 ha reserve resides alongside the longest river in Cameroon, River Sanaga, which snakes across the Douala Eda landscape feeding into the Gulf of Guinea. Unique and endangered wildlife feed and breed here and locals rely on the reserve for both food and fuel.

Some 400 local fishermen work on Lake Ossa and a quarter of the population practices small-scale agriculture on the land surrounding the lake.

However, unregulated use by locals and the expansion of industrial agriculture are threatening the ecological integrity of the reserve, and, consequently, the people, plants and animals that depend upon it.

With limited state resources and without sufficient staff or law enforcement to demarcate the reserve’s perimeter, the TRI Cameroon project is working with Sylvian and his team of eight to employ new strategies.

Their joint approach is to accommodate and support settlers already residing within the reserve while reducing expansion into the area by newcomers.

A living fence on the reserve’s disappearing perimeter 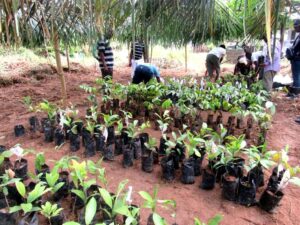 Since 2000, the rich and fertile soil in the Douala-Eda region lured agro-industrial companies to the area, where they established large palm oil plantations at the expense of forests.

As these plantations grew and expanded, communities of palm oil workers joined the already existing Indigenous communities and local people living alongside or within the reserve. As new arrivals settled, they too cleared forests to set up subsistence farms, an unintended consequence of palm oil production. Today, over 20 per cent of the protected area has been transformed into farmland.

With no plans underway to establish a development plan for the reserve the result is a fragmented landscape that is disastrous for the native plants and animals.

To prevent further encroachment and clearing within its borders, Sylvian and his team are building a living fence to mark the reserve from the neighboring swathes of land.

Bamboo is a type of non-timber forest product (NTFP), with recognized economic value for the benefit of the population. Once mature, these bamboo stems can be sustainably harvested by locals neighbouring or already within the reserve, ensuring they continue exercising their so-called rights of use.

Bamboo is also remarkably fast growing, which allows for the revegetation of degraded areas in a short period while taking pressure off slower-growing trees. To date, the TRI Cameroon project has helped the reserve’s conservation service grow and plant over 11000 bamboo trees.

Placing restoration and community needs side by side

Bamboo is only one type of NTFP requested by locals and distributed in the area. The TRI Cameroon project is providing other high value seedlings directly to farmers to plant on already cleared areas of the reserve.

Nearly 800 other NTFPs, including species such as the bush mango (Irvingia spp.), the bitter cola (Garcinia cola) and the safou (Dacryodes edulis) have been planted. In 2022, a larger nursery will be established to propagate 50 000 bamboo and other NTFPs of interest to locals.

As Evelyne Mbatchou, a 50-year old widow and mother of five, who has a farm near the reserve, says, “I include NTFPs in my farmland because, at maturity, it will help diversify my income.”

Providing these species to farmers living within and alongside the reserve offers alternative sources of revenue and helps reduce the need to encroach or clear areas deeper inside the reserve.

To date, over 48 farmers now include NTFP species in their cropland, with the TRI Cameroon project providing additional training to farmers in sustainable agroforestry techniques.

In this way, the welfare of communities and restoration are linked, with locals becoming more and more familiar “with involvement in the project implementation,” Sylvian says.

With support and resources provided by the TRI Cameroon project, Sylvian has seen increased interest and participation from the locals who are sustained by the land – an important indicator of the long-term success of restoration activities – and also from municipal authorities, who are now seeking to expand restoration efforts to the banks of the River Sanaga.

This active engagement lays the foundation for new approaches to bolster the country’s ongoing restoration efforts.

This article originally appeared on the website of the IUCN. Reprinted here (with minor edits) by permission.