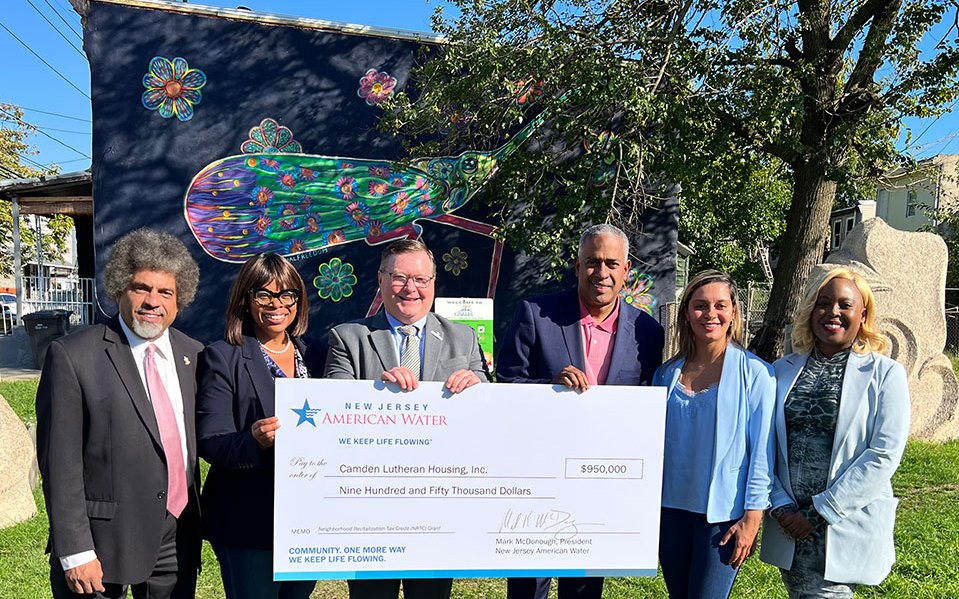 The funding, which was announced in coordination with the state’s Department of Community Affairs (DCA), will be used for My North Camden!, a diverse and highly collaborative project submitted by CLHI and six local partners.

“We are grateful to American Water for supporting the revitalization of Camden’s neighborhoods though the use of NRTC funding for ‘My North Camden’,” said Camden Mayor Victor Carstarphen.

“We remain hyper focused on building strong neighborhoods and improving the quality of life across the City. This is another step in the right direction and demonstrates the extraordinary level of collaboration taking place in Camden,” he added.

“This funding opportunity represents the dedication and commitment of a number of North Camden stakeholders, partners, residents and neighbors. All of us at Camden Lutheran Housing, Inc. (CLHI) are inspired to lead this work on their behalf and fulfil their life-long legacies,” said Brandi Johnson, CLHI Executive Director.

“We are forever grateful to them, New Jersey American Water and the NJ Department of Community Affairs’ (NJ DCA) NRTC Program for their support of our efforts to improve the lives of the North Camden families we serve,” she added.

The announcement took place at a Pop Up Art Party hosted by Camden Community Partnership.

The Party featured We Live Here Artists, four local artists from Camden who work together on public art around the city, including murals, gardens, environmental justice and park beautification projects.

The team of talented visual artists was founded following their apprenticeship with “A New View,” Camden’s $1 million Bloomberg Public Art Challenge Grant. This free community party celebrates the conclusion of this program and is part of the My North Camden community events programming.

“It will be a transformational development that empowers the community and betters the lives of North Camden residents. We are proud to support Camden Lutheran Housing in this endeavor and look forward to their continued work in revitalizing the North Camden neighborhood,” he continued.

“These funds mean the continued support of both homeownership and economic growth in North Camden,” said Dana Redd, Chief Executive Officer of the Camden Community Partnership.

“We are deeply appreciative of New Jersey American Water for the significant investment of NRTC funds and their deep commitment to the people of Camden,” she concluded.

The NRTC Program, which is administered by DCA’s Division of Housing and Community Resources, is designed to spur the renewal of distressed neighborhoods through strategies developed by residents and the community-based nonprofit organizations that assist them.

These local organizations prepare, submit, and receive approval from DCA for multi-year revitalization plans for the neighborhoods they serve.

The approved projects are listed in a qualified projects pool from which companies choose the ones they want to financially support.

Since 2010, New Jersey American Water provided approximately $10 million in grants to community initiatives in its service areas across the state through the Neighborhood Revitalization Tax Credit program. Approximately $8.95 million of that total has been awarded to Camden initiatives.

New Jersey American Water has been the water services provider for the Cramer Hill and East Camden parts of the city for over 100 years and American Water Contract Services has been the contract operator for Camden’s water and wastewater system since 2016.

New Jersey American Water’s application to award this grant was approved by the DCA in December 2021.