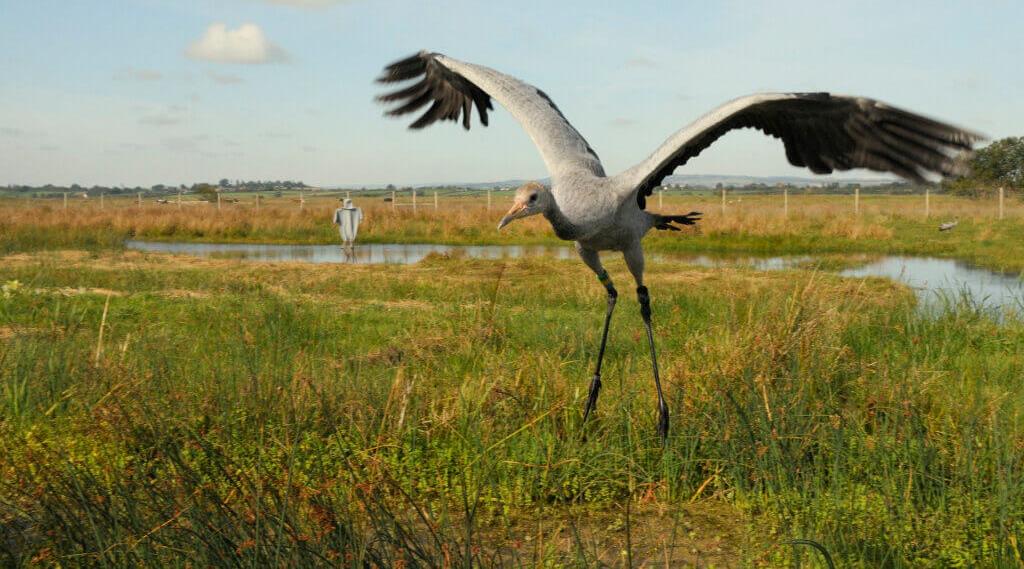 Cranes are the tallest bird in the UK, standing at 4 feet. They are fabled for their dances; complex displays with bows, pirouettes and bobs, which take place every year between the male and female.

They used to be quite common, and were frequent fixtures at medieval feasts: Henry II’s chefs cooked up 115 of them at his Christmas feast in 1251, but a combination of hunting and wetland destruction led to their extinction in the 1600s. 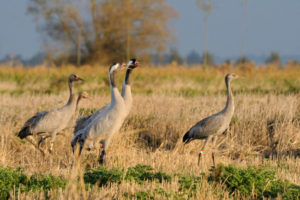 Cranes became extinct in the UK around four hundred years ago but following the natural recolonization of a few birds and extensive restoration work—including a reintroduction program—these graceful birds are making a spectacular return.

The latest common crane survey in the UK reveals a record-breaking 56 pairs of cranes in 2019, bringing the total population to an estimated 200 birds.

Chrissie Kelley, Pensthorpe Conservation Trust’s Head of Species Management said, “As partners in the GCP, and with a long association working with Eurasian Cranes, we are thrilled to see wild cranes doing so well. Seeing these birds in flight is breath-taking and we have regular sightings of them over our reserve in Norfolk. We hope soon to spot one of the released birds amongst those that visit Pensthorpe.”

In 1979, a small number of wild cranes returned to Norfolk, and conservation groups have been working together to encourage more and more of these birds. They have now spread to other areas of the UK, benefiting from restored habitat such as at the Royal Society for the Protection of Birds‘ (RSPB) Lakenheath and Nene Washes reserves as well as Natural England’s Humberhead Peatlands. 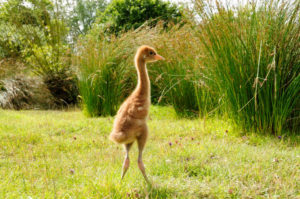 Dr. Geoff Hilton, WWT’s Head of Conservation Evidence added, “The reintroduction of lost species must be supported with good habitat management and protection for the recovery to work. The success of the crane project to date demonstrates what can be achieved in a short space of time by giving nature a helping hand. We also must thank dedicated land managers and farmers in the area for supporting crane conservation.”

In 2010, the Great Crane Project—a partnership among the RSPB, WWT and the Pensthorpe Conservation Trust, and funded by Viridor Credits Environmental Company—joined the movement. The project creates and improves existing habitat, as well as hand-rearing young birds for release on the Somerset Levels and Moors.

Damon Bridge, Chair of the UK Crane Working Group said, “The increase of cranes over the last few years shows just how resilient nature can be when given the chance. With the support of our wonderful partners we’ve been able to recreate more and more of the cranes’ natural habitat, giving them a place to recuperate after the winter and raise their chicks. They are not yet out of the woods, but their continued population climb year after year is a very positive sign.”

All the conservation effort has yielded impressive results, with 56 pairs across the UK last year. Of these, up to 47 pairs attempted to breed and they raised 26 chicks.

Andrew Stanbury, RSPB Conservation Scientist said, “Thanks to the dedication of individuals, the UK Crane Working Group and conservation organisations, we are delighted to see crane numbers continuing to recover. Nature reserves have played a vital role. At least 85% of the breeding population are found on protected sites, with a third on RSPB reserves alone.”

The total population is now believed to be over 200 birds – a new record.