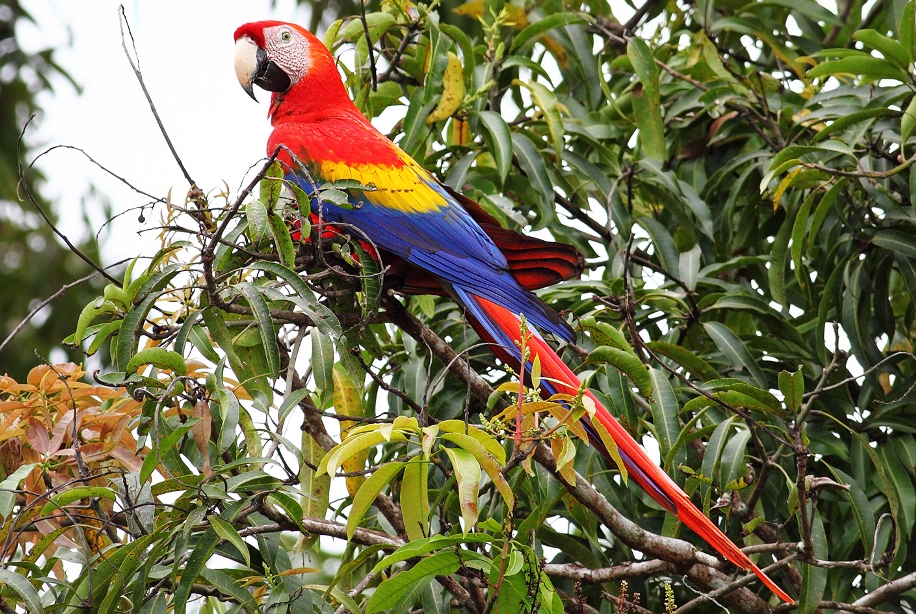 The scarlet macaw is a large red, yellow, and blue bird, a member of the group of Neotropical parrots called macaws. Most of the current populations live in the humid evergreen forests of tropical South America, but their current range comprises south-eastern Mexico to the Peruvian Amazon, Colombia, Bolivia, Venezuela and Brazil.

It has suffered many local extinctions throughout its historic range, due primarily to habitat destruction and to capture for the parrot trade. Formerly, it ranged all the way up to northern Mexico, in the southern portion of the state of Tamaulipas, which borders the U.S.

Now, in June of 2018, 27 scarlet macaws were released at the Tuxtlas Biosphere Reserve, near the town of Dos Amatesin in the Mexican state of Veracruz along the coast of the Gulf of Mexico. The release was part of a long-term program started five years ago. Its goal is to reestablish the species in its historic habitat. The macaws were extirpated from Veracruz about four decades ago.

The restoration effort is a partnership among the Institute of Biology at the National Autonomous University of México (UNAM), a captive breeding program at the tourist resort of Xcaret in the state of Quintana Roo, and several environmental groups, plus local farmers and other landowners.

Patricia Escalante Pliego, a researcher at UNAM, said that the 27 macaws were donated by Xcaret, and that they hope to eventually release 500 birds.

She explained that approximately 80% of the macaws released since 2013 have established themselves in the Los Tuxtlas environs, which is an excellent survival rate. The attrition was primarily due to being eaten by predators or to harsh weather. Four of the birds were poached by people.

She added that reintroduction is expensive: over 1 million pesos (almost $49,000 USD) is spent annually on bird feed and creating nesting places to help the newcomers get established quickly. The biggest current threat is the residents of Catemaco, who kill the birds, and cut down the nesting trees.

Photo of scarlet macaw in Costa Rica by Benjamint444 via Wikipedia.