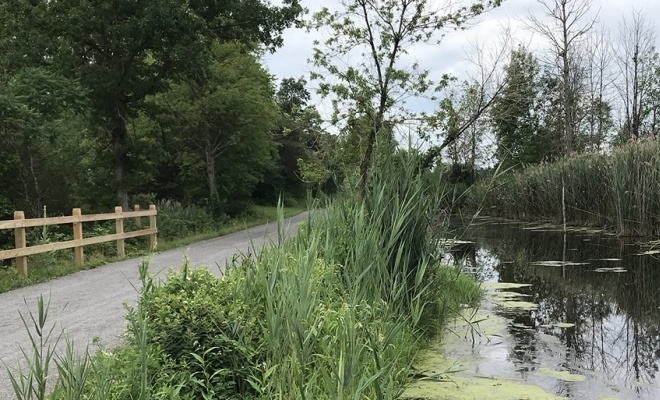 On November 3, 2022, a $6.5 million restoration project to enhance the Genesee Valley Greenway State Park from Rochester, New York to the village of Avon was completed.

Rehabilitation of the 17-mile stretch at the north end of the greenway was supported by a $2.5 million grant from the not-for-profit Ralph C. Wilson, Jr. Foundation, created after the 2014 death of the former owner of the Buffalo Bills, as well as state and federal funding

Scottsville Village Mayor Maggie Ridge said, “It never ceases to amaze me at what an investment of time, energy, passion, and some funding can get done. This trail is truly a gem in Scottsville and will continue to be for many years to come, thanks to the talented resources that brought this to fruition.”

Improvements included new stone dust resurfacing, infrastructure improvements and signage from Ballantyne Road in Rochester to Route 5 in the village of Avon in Livingston County.

Assemblymember Harry Bronson said, “Greenspaces make a community. Upstate New Yorkers enjoy all four seasons and investments like this directly serve our families and children. Thank you to the Ralph C. Wilson, Jr. Foundation and federal government for partnering with the State of New York to fund this beautiful project. Cyclists, runners, walkers, snowshoers and more will be able to utilize this pathway for years to come here in our region.” of healthy outdoor recreation. My dog and I walk the greenway often. The improvements will ensure this local treasure is enjoyed for generations to come.”

State Senator Edward Rath said, “It is great to see investments being made in the community. Improving our aging infrastructure is critical and this is important.”

J.J. Tighe, Director of the Parks & Trails Initiative for the Ralph C. Wilson, Jr. Foundation said, “This project will improve trail access and the overall user experience through trail re-surfacing and sign improvements as well as create lasting connection between the communities who share it. Friends of Genesee Valley Greenway and their partners are enhancing the Genesee Valley Greenway one mile, one bridge and one section at a time. We’re excited to support the Friends of the Genesee Valley Greenway and NYS Parks to restore this beautiful regional asset. With this 17-mile stretch complete we are excited to see continued progress toward the entire 90-mile greenway connecting the City of Rochester, Letchworth State Park, Allegheny State Park and all of the communities along the Greenway.”

“These improvements to the historic Genesee Valley Greenway State Park will allow more residents and visitors to explore the scenic trails, woodlands, gorges, and historic villages that make it a must visit destination in New York,” Governor Kathy Hochul said.

“The spirit of the late Ralph C. Wilson, Jr. lives on through generous philanthropic efforts that expand recreational opportunities and boost tourism. We are grateful to all our partners that helped bring together a pathway unlike any other in Western New York,” she added.

New York State Parks Commissioner Erik Kulleseid said, “The Genesee Valley Greenway State Park provides opportunities for year-round public recreation, on and off-road, and these improvements make it safer and more welcoming to cyclists and pedestrians than ever before. We are grateful to the Wilson Foundation for supporting these improvements as well as with the Friends of the Genesee Valley Greenway and their tireless efforts to make it what it is today.”

In addition, a recent acquisition of a 17-mile former rail corridor at the southern end of the trail will create opportunities to close gaps in the trail and create much-needed connections for neighboring communities.

Friends of the Genesee Valley Greenway President Joan Schumaker said, “The Friends of the Genesee Valley Greenway have looked forward to the upgraded trail surface, infrastructure improvements, and enhancements provided by this transformative project for the past 30 years. We are already observing increased numbers of visitors and local residents using the newly improved trail and expressing their appreciation. We expect this to continue as trail users become aware of GVG State Park connections to the Empire State Trail and other area trails. Thanks to all for a job well done.”

Photo courtesy of the Office of Governor Kathy Hochul.