On February 1, 2019, Sadiq Khan the Mayor of London, England, awarded over £1.27 million to help restore the quality of the city’s polluted air by both restoring existing green spaces and creating more of them.

The funded projects include green “pollution barriers” for schools that will help protect against toxic air, plus new green spaces for housing estates, community gardens to help improve mental health and wildlife habitats in parks.

Greening playgrounds with climbing plants across entire walls, hedges, and wider green infrastructure can be beneficial to boosting air quality and reducing exposure to harmful emissions from busy roads. A recent report by the Air Quality Expert Group found a “green barrier” between cars and pedestrians can halve the levels of pollution behind the barrier.

Professor Paul Monks, Chair of the Air Quality Expert Group (AQEG) explained, “Green barriers between cars and pedestrians can reduce pollution just behind the barrier by as much as a half; in the situation of school playgrounds this can be seen to have beneficial effects. The primary push must remain on reducing harmful air pollution into the atmosphere.” 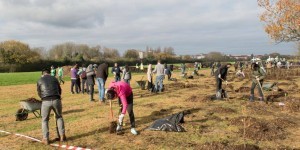 The winning Community Green Space projects include help for 29 primary schools located next to some of London’s most polluted roads, which will receive a combined total of £400,000 for green infrastructure in playgrounds to reduce children’s exposure to toxic traffic emissions.

As well as the grants, the Mayor has published two new maps that detail London’s green spaces and waterways and can be used to help identify where greater investment in greening would bring significant benefits.

The projects form part of a package of measures to protect children from toxic air that the Mayor is delivering, including helping schools through his air quality audits program, working with boroughs to restrict road usage outside school entrances, upgrading boilers, tackling engine idling, promoting walking and cycling and piloting indoor air filters.

Mayor Khan has recently expanded London’s network of air quality monitors, including providing them for many schools. The monitors will help assess the impact of green barriers. These measures sit alongside the introduction of the 24-hour Ultra Low Emission Zone on April 8 in Central London.

Marner Primary School in Bromley-by-Bow, Tower Hamlets, has been awarded £30,000 from the Mayor’s Community Green Space fund to transform its playground with a range of green measures to reduce emissions from the highly polluted A12 and nearby Devas Street. The school is one London’s most polluted primary schools, and was one of 50 assessed last year as part of the Mayor’s air quality audits programme.

The school will install “green screens” of evergreen climbing plants, such as ivy, to create a ‘barrier’ wall between the playground and Devas Street. Further trees and hedgerows will be planted along the school perimeter, and a ‘green gateway’ will be created at the main entrance to encourage children to walk through a tunnel of evergreen plants.

As well as air quality schemes the fund is helping a range of environmental projects include creating community gardens, improving parks, and cleaning up waterways. All 78 winning projects were awarded between £5k and £50k each across 26 boroughs and will create and improve 650,000 square metres of green and blue (waterway) spaces –the equivalent of 40 football pitches. The schemes will involve more than 5,000 adult volunteers and more than 40,000 children.

The projects are all part of the Mayor’s work to make London one of the greenest cities in the world and to become the first National Park City, by improving and increasing green spaces, cleaning the capital’s air, planting trees, reducing waste, and becoming zero-carbon by 2050.

Mayor Khan said, “It is unacceptable that our filthy air is affecting the lung growth and respiratory health of our young children, especially those who go to school by busy, polluted roads. My funding will help create much needed new spaces for communities to enjoy and help reduce toxic pollution with green barriers in and around schools to protect our children from polluted air. This will complement our drive to reduce vehicle emissions across the capital, including the introduction of the 24-hour Central London Ultra Low Emission Zone in April, and cleaning up our bus and taxi fleet. The new water ways, wildlife habitats and community gardens we are creating will help London maintain its status as one of the greenest world cities as we work towards becoming a National Park City this summer.”

New green spaces, water ways and wildlife habitats being created and upgraded include:

Carol Doherty, Assistant Head, Marner Primary School said, “Marner School are really excited and enthusiastic to get going with this important project. It is something we as a school community feel really passionate about and we want air pollution to improve not just locally but globally. The children are also working on understanding more about air pollution in their lessons and year three are making a short film. We are ensuring the fund enables us to make changes that are sustainable and educational for future generations.”