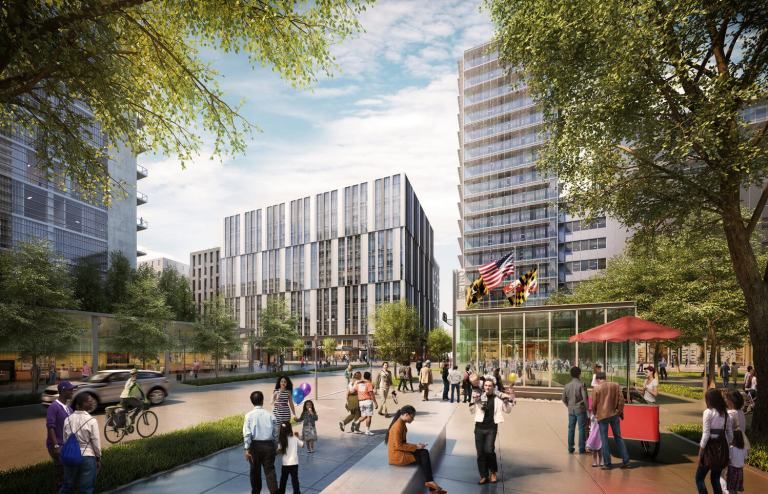 Thousands of Maryland state employees are about to move to new digs in downtown Baltimore, leaving their current state government offices so that the current State Center site can be redeveloped.

The proximity of State Center to premier institutions, including the University of Baltimore and Maryland Institute College of Art, as well as its accessibility to transit options, make it an ideal and attractive location for future growth and investment.

On November 26, 2019, Governor Larry Hogan announced that he is directing the Maryland Stadium Authority (MSA)—in coordination with the Maryland Department of General Services (DGS)—to immediately move forward with a Request for Information (RFI) and Request for Proposal (RFP) for the transformative, long-awaited redevelopment of State Center.

“This is exciting news on a long-awaited, transformative project for Baltimore City that we have been committed to and pushing hard for since day one of my administration,” said Hogan.

“We will work closely with the community and with the city to ensure that the redevelopment of this site addresses priorities of the local citizens, including not just employment opportunities, but additional affordable residential units, a much-needed grocery store, and other retail options with the goal to make it a better place to live, work, and play,” he added.

Departments housed within State Center will immediately begin working with DGS to find commercial office space in Baltimore City, ultimately leading to the relocation of state workers and the demolition of existing State Center buildings. The governor reaffirmed his commitment that all executive agencies and the jobs currently located at State Center will remain in the city, with priority given to areas in and around the central business district.

The current 3,300 state employees will absorb 1 million square feet of available space, which will dramatically boost and stabilize downtown Baltimore. According to CBRE, the current vacancy rate of the central business district is 20%.

“General Services looks forward to advancing the next steps to redevelop the State Center campus,” said Churchill. “We are optimistic for the future potential to positively impact the surrounding community and help create a better working environment for our state workforce.”

Since taking office, Governor Hogan has aggressively pushed to move forward this long-delayed project. The former developers, who were selected by the previous administration and delivered no measurable work product, attempted to force the state to pay more than $100 million in a series of lawsuits after their leases were invalidated by a unanimous vote of the Board of Public Works.

Despite this ongoing litigation, last June, Governor Hogan directed DGS to issue an Expression of Interest (EOI) to survey the market and confirm interest from the development community. As a result of the EOI, eight firms expressed favorable interest. DGS and MSA will leverage the responses in the next steps to recruit a development partner.

The Hogan administration says it will continue working with the City and the local community to ensure that the redevelopment of the site addresses local priorities, which include additional residential units, office space, a grocery store, and retail options.