Millinocket is a Native American (Abenaki) word that means “the land of many islands”. For 10,000 years, Millinocket was inhabited solely by Native Americans. Then Thomas Fowler arrived in 1829: the first settler of what would eventually become the town of Millinocket, Maine.

The area began to grow in 1894 when the Bangor and Aroostook Railroad finished its line to Houlton, providing rail service to the area. Millinocket’s remote forest location made the town an ideal place for the Great Northern Paper Company to locate their mill. Construction began in 1899. The mill was built by hundreds of Italian immigrant stonemasons and laborers. 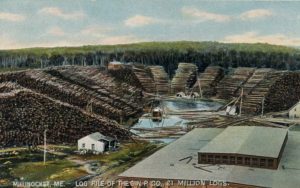 The region grew so quickly that the small township was dubbed “The Magic City” because it grew so fast in the wilderness. Great Northern Paper Company grew to be the largest mill in the world. Harnessing the water of the West Branch of the Penobscot River, power was generated to drive the mill and turn out paper which was exported throughout the world. The mill operated 24 hours a day seven days a week, churning out newsprint at the rate of 240 tons per day.

Throughout the 20th century, the community prospered. Millinocket citizens formed different organizations to provide structure and entertainment for the town. The Great Northern Hotel and the Millinocket Opera House were two notable locations for performances.The citizens had sports teams and a community band. Millinocket even had a golf course. Millinocket kept growing.

The town was very self-sufficient. It is said that during the Great Depression no one at the mill lost their jobs. Although the workers reduced their hours to keep everyone working, they were all able to support their families during that bleak period in American history.

Millinocket’s population peaked at over 7700 residents in the 1960s and 1970s. The Millinocket and East Millinocket mills produced newsprint for some of the largest newspapers on the East Coast, including The New York Times. It produced paper for phone books and catalogs. The town’s people sometimes remarked that most of the people on the East Coast have held Millinocket-made paper in their hands at one time or another. Great Northern Paper was taken over by Georgia Pacific in 1989 and then the mill switched hands again in 1999 to Inexcon, a Canadian company.They were acquired by Brascan Corporation in April 2003 and operated under the name of Katahdin Paper Company LLC. In 2003 Brookfield Asset Management bought the mills after the company filed for bankruptcy. That company continued its decline, laying off workers in 2008. The mill closed its doors forever in 2008. 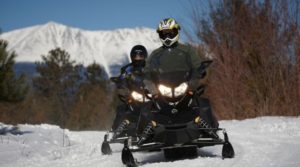 Can outdoor recreation save Millinocket?Photo courtesy of Visit Maine.

Today, most people who know the town think of it in terms of a tourism—not industrial—economy. Millinocket is the gateway to Mount Katahdin, which was voted World’s Best Hike by National Geographic, and it sits at the northern terminus of the Appalachian Trail. It’s also the gateway to the famed Golden Road, the North Maine Woods, the West Branch of the Penobscot River, the Allagash Wilderness Waterway, Baxter State Park, and a vast network of lakes, trails systems, day-hikes, and 4-season recreational opportunities.

So, it’s blessed with a great location, but will tourism be enough to survive on? Probably not, which is where Sean DeWitt comes in. Sean is president of Our Katahdin, a volunteer-driven nonprofit organization working to promote community and economic revitalization in the Katahdin region. Our Katahdin serves as a connector, pulling together ideas, people and money to move the community forward.

But Sean’s full-time job is as Director of the Global Restoration Initiative at the World Resources Institute in Washington, DC. In that position, his scope and mission are slightly larger: to Inspire, enable and mobilize action to restore vitality to degraded landscapes and forests all around the globe.

As reported here in REVITALIZATION on January 15, 2017, Our Katahdin, acquired the former Great Northern Paper assets, including all property, designations, and liabilities held by GNP West, GNP Holdings II, and the New England Center for Business Development. Transfer of stewardship of the properties was finalized on January 11, 2017, for the nominal price of $1. You heard right: one of the world’s smallest and newest non-profits now owns the world’s largest paper mill.

The newly-acquired holdings include the 1400 acre former mill site, land adjacent to the Millinocket Municipal Airport, a 157 acre parcel of land at Ferguson Pond and several additional parcels in Millinocket. The acquisition includes a Regional EB -5 Center, which is a valuable federal designation that enables foreign investors to invest in projects in the United States.

The purchase comes with approximately $1.4 million in tax liability to the IRS and $155,126 in back real estate taxes, as well as additional back taxes on business equipment owed to the Town of Millinocket. A courageous move? No doubt.

According to Mike Madore, Chairman of the Millinocket Town Council, “The best scenario for the citizens of Millinocket is to get the mill site back into service as an industrial park, with the EB -5 designation and environmental agreements intact. A collaboration between the town and Our Katahdin gives us the capacity to begin the hard work of transforming the mill site into a world-class industrial park. This is about using the incredible assets we have in the area to bring jobs and investment to the town.”

Together, Our Katahdin and the Town of Millinocket have expanded capacity to marshal grants, investment, incentives and most importantly, to engage the local community in the process of redevelopment. Our Katahdin plans to use their community investment arm, Our Katahdin Investments which is also a 501(c)(3) nonprofit organization, to provide opportunities for citizens to invest in the redevelopment of the mill site.

“We know this purchase comes with enormous responsibility. We can’t promise instant results, but we can guarantee our best effort to help transform this idle industrial site into a productive, innovative bio- industrial park that leverages the comparative advantages of our region. This site is our heritage. We strongly believe in its future,” said Dewitt.

“If people think we’re going to bring the kinds of jobs back that we had in the 1950s, I would say the chance of success is precisely zero,” DeWitt says. “We have to embrace the world as it is. We still have the transmission lines from the dams. We still have affordable power. We have a cool climate for data centers. We have some things that nobody on the East Coast has.”

“The community has gone through a whole succession of letdown after letdown,” says Mike Osborne, Our Katahdin’s vice president and a fifth-generation Mainer. “Great Northern took care of us for 100 years. We have to take care of the next 100 years.”

The first new building block toward rebirth slipped into place on February 13, 2018, when it was announced that a Maine-based firm, a manufacturer of cross-laminated timber, would be moving onto the old mill site, bringing 100 jobs.

Town Manager John Davis worked in the mill here for 30 years and can remember the days when human resources employees would patrol the town’s bars and restaurants to recruit workers for the mill’s ’round-the-clock shifts. He envisions a new Millinocket economy fueled by biotech businesses and data centers and solar plants. “I haven’t been this optimistic about Millinocket since I got out of high school,” he enthused.

See full article by Thomas Farragher in the Boston Globe.