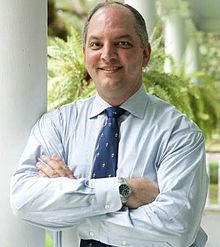 Louisiana Governor John Bel Edwards, along with several other local policymakers, recently flew along his state’s rapidly-eroding coastline to get an aerial perspective on the damage.

They were especially interested in seeing the results of the state’s many environmental restoration projects (most of which have been funded by BP fines), and to see where more such work is needed.

He is on record for proposing the restoration of some 20,000 additional acres of Louisiana’s coast by 2020.

Governor Edwards says that coastal restoration is “the greatest challenge of our time. Protecting the coast protects an awful lot of jobs,” he continued. “Whether it’s the energy sector, whether it’s fishing, whether it’s navigation, but really it’s our entire way of life.”

The current master plan for coastal restoration calls for spending $50 billion over 50 years.

These projects represent two out of seven total projects that were selected for funding by the RESTORE Council under its Initial Funded Priorities List that will directly benefit Louisiana. One additional grant in the amount of $7.3 million was funded by the RESTORE Council in September for the engineering and design of the West Grand Terre Beach Nourishment and Stabilization Project.

“The Golden Triangle Marsh Creation and the Biloxi Marsh Living Shoreline projects represent key strategic large-scale points of restoration. When complete, these projects will generate 600 acres of marsh creation and living shoreline protecting 121,000 acres respectively. These restoration projects also work together with the $15 billion structural hurricane storm damage risk reduction system (HSDRRS) around the Greater New Orleans area. We are eager to begin work on these projects to accomplish the multiple goals of ecosystem restoration, improved resilience for the HSDRRS, and improvements to fish and wildlife habitat and enhanced recreational opportunities”, said CPRA Board Chairman Johnny Bradberry.

The Golden Triangle lies at the confluence of the Mississippi River Gulf Outlet (MRGO) and the Gulf Intracoastal Waterway (GIWW), an area referred to as “the funnel” after Hurricane Katrina in reference to the effect of storm surge passing through both channels to become one traveling west towards New Orleans. The Biloxi Marsh Living Shoreline project area is located along the shoreline of Eloi Bay and Eloi Point, near the mouth of Bayou la Loutre adjacent to and directly east of the now-closed civil engineering disaster known as MRGO.

“These two projects are good examples of how the agency leverages projects to mutually enhance benefits and builds upon lessons learned. The Golden Triangle stands in front of the Inner Harbor Navigation Canal (IHNC) Surge Barrier, the largest design-build project in the history of the U.S. Army Corps of Engineers. The Biloxi Living Shoreline Project builds upon lessons learned from an adjacent living shoreline demonstration project, as well as another project in Terrebonne, in order to reduce shoreline recession and enhance oyster production. We are ready to move forward quickly on these projects and we are pleased that these funds allow us to do so,” said Michael Ellis, Executive Director of the CPRA.

“The RESTORE Council is thrilled to support the planning phase of these two critical Master Plan projects”, said Justin R. Ehrenwerth, Executive Director of the Council. “This investment will advance projects with the potential to provide important ecosystem benefits, including increased community resilience through the ‘multiple lines of defense’ strategy. The Council looks forward to continuing this important work in Louisiana.”

On December 9, 2015, the RESTORE Council approved an Initial Funded Priorities List which contained a list of the first projects and programs to be funded under the Council’s Initial Comprehensive Plan.