On January 16, 2019 the Louisiana Coastal Protection and Restoration Authority (CPRA) released its draft Annual Plan Fiscal Year 2020 to the public at its monthly board meeting in Baton Rouge.

The Annual Plan is the document by which the CPRA details how it aims to implement the vision of the Coastal Master Plan in the coming fiscal year based on the outlook of projected revenues and expenditures. The FY20 Annual plan includes progress on 76 active projects accounting for $783 million in projected expenditures.

“The Annual Plan is the vehicle by which we communicate to the people of Louisiana and the Legislature, which projects and programs outlined in the Master Plan will be able to move forward in the coming fiscal year,” said Chip Kline, Interim Chairman of the CPRA Board. “In FY20 you are going to see where the state intends to spend its first significant Phase II GOMESA revenues, how we are continuing to mobilize Deepwater Horizon oil spill funding for large and small projects alike, and what we think the following FY21 and FY22 fiscal years might bring in terms of revenues and expenditures. If the Master Plan is the vision, the Annual Plan is where that vision becomes reality.” 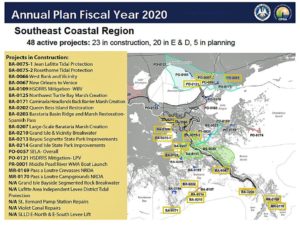 The FY20 plan outlines $783 million in projected expenditures with 89% for project-associated costs for six projects in planning, $10.8 million, 32 projects in engineering and design, $141 million, and 38 projects in construction, $505 million. The plan also includes $38.5 million for 154 projects in operation, maintenance and monitoring.

“CPRA is proud to once again have the bulk of its Annual Plan expenditures earmarked for construction projects and only 4% identified for operating costs,” remarked Michael Ellison, executive director of CPRA. “This efficiency helps us make sure that projects that are important to local communities and identified in the Master Plan move forward as quickly as possible.”

Louisiana Coastal Protection and Restoration Authority is the single state entity with authority to develop, articulate, implement, and enforce a comprehensive coastal Master Plan of unified vision, to reduce tropical storm surge flood impact, to restore the state’s natural resources, to build land to protect the nation’s critical energy infrastructure, and to secure Louisiana’s coast now and for future generations.