On August 29, 2019, $22 million in federal funding was committed to creating Low Carbon Innovation Centres for the Vancouver, BC region and for Edmonton, Alberta.

The funding is part of a $183 million initiative called Low Carbon Cities of Canada (LC3), which aims to help major cities across the county reduce their carbon footprint through research, capacity building, and use of innovative financial tools. 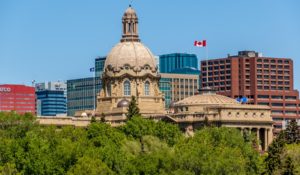 Photo of Edmonton via Adobe Stock.

The Edmonton funding will go to the Alberta Ecotrust Foundation, a Calgary-based charity, to create programming that will incentivize businesses to decrease carbon emissions and invest in clean energy.

“The LC3 centre isn’t a centre so much as an opportunity for us to work with the City of Edmonton to accelerate and scale local projects that are in-line with the city’s energy transition strategy,” said Pat Letizia, the executive director of the Alberta Ecotrust Foundation.

The announcement is part of the federal government’s Low Carbon Cities Canada project, which will create seven climate centers across the country. Centers already announced in Toronto, ON and Halifax, NS received $40 million and $18 million, respectively.

“Vancouver is emerging as a global leader in greenhouse gas reductions in buildings. The LC3 investment will amplify and accelerate this trend while also creating opportunity for new, impactful innovations and initiatives,” Christian Cianfrone, Executive Director of the Zero Emissions Building Exchange.

Of course, to achieve actual climate restoration (as opposed to mitigation), the focus would ideally be on carbon-negative, not just low-carbon, but this is a (belated) step in the right direction. Low-carbon should have been the focus 30 years ago.

The City of Vancouver was an early partner in the LC3 initiative and will be leading a process to establish the local Low Carbon Innovation Centre in consultation with other local governments, Metro Vancouver, the province, industry stakeholders, local universities and non-profit organizations, to ensure the Centre meets local climate action priorities and needs.

“Vancouver City Council has joined cities around the world in declaring a Climate Emergency to scale-up climate action and limit warming to 1.5°C,” said Mayor Kennedy Stewart. “This funding investment and our leadership to develop the Centre will help to develop and share new local solutions and best practices to reduce carbon emissions from buildings, which is a key priority of our climate action response.”

The mandate of the Low Carbon Innovation Centre for the Vancouver region will be to aggressively reduce carbon emissions while supporting the growth of green jobs. The Centre will operate independently but in close collaboration with local government, with the aim of helping cities and the region achieve their climate targets. The Centre will be expected use a variety of approaches to achieve its mandate, including the use of impact investing, granting, capacity building, and supporting policy development and research.

“To keep Vancouver liveable, we will need to decrease our emissions, as well as focus on affordability and grow green jobs in the region,” said Gil Kelley, General Manager of Planning, Urban Design and Sustainability. “The City has a successful track record of collaborating with external organizations and the private sector to advance our climate goals and we’re looking forward to building on those partnerships with the LC3 project.”

“This is a prudent and powerful investment that will generate long term returns for the economy, the atmosphere and our communities,” said Alex Boston, Executive Director of Renewable Cities.

The LC3 initiative was inspired by the successful model pioneered by The Atmospheric Fund (TAF) in Toronto, which was established in 1991 through an endowment from the City of Toronto. TAF uses innovative financial tools, administers grants and advances policies and programs to reduce carbon emissions and improve air quality in the Greater Toronto and Hamilton Area.

“We’re pleased to see senior government investments in technology and capacity for high performance building and retrofit standards. These investments will reduce energy consumption and associated greenhouse gases, which benefits people, communities, and our environment,” added Jack Wong, CEO of the Real Estate Foundation of BC.

The City of Vancouver recently declared a Climate Emergency and approved recommendations to accelerate local climate action. The Low Carbon Innovation Centre for the Vancouver region is expected to help advance these accelerated actions, particularly those focussed on green buildings and energy retrofits.

FCM President Bill Karsten explained, “Across the country, local communities are on the front lines driving Canada’s climate innovation. As the order of government closest to Canadians’ daily lives, and with influence of roughly half of Canada’s GHG emissions, municipalities know that local climate solutions are critical to meeting Canada’s climate goals. From testing new carbon-reducing approaches to scaling up proven solutions like energy retrofits to district heating to green fleets, local leaders are using new tools to unlock their full potential.”

He concluded, “We’re pleased to work with Low Carbon Cities Canada as well as with the City of Vancouver to make the community more livable for the people who call it home. This $22-million investment will help the City of Vancouver reach its full emissions-cutting power. We already see our cities leading the way on low-carbon innovation, and this investment will help us go further — to build cost-saving energy solutions that build better lives for Canadians. Today’s announcement also recognizes that local leadership is essential to cutting emissions. Funded through the Federal Budget 2019’s nearly $1-billion investment in working directly with municipalities, this commitment doubles down on working directly with local governments and FCM’s Green Municipal Fund — a leader in driving green innovation across the country.”

Photo of Vancouver via Adobe Stock.