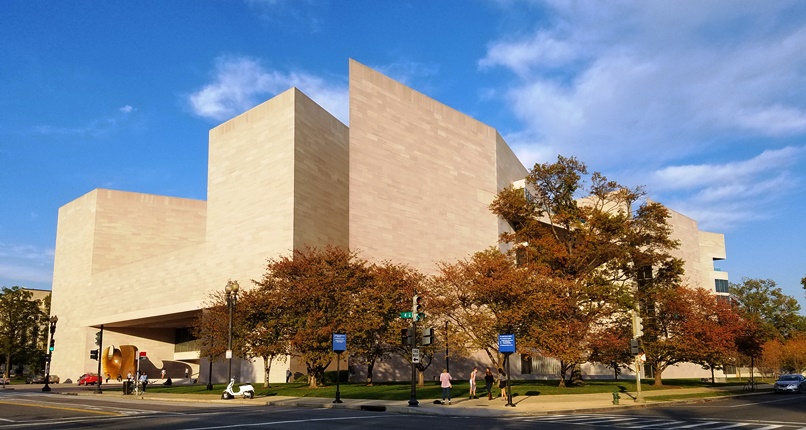 After a three-year closure and $69 million in renovations, the National Gallery of Art‘s East Building in Washington, DC reopened on September 30, 2016. The highly anticipated reopening of the building, which houses the museum’s modern art collection, unveiled over 150 new works of art and 12,250 square feet in exhibition space. 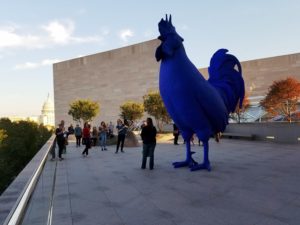 Of particular interest to most visitors was the expansion of the gallery without any changes to the building’s footprint. How does one add over 12,000 square feet of exhibition space without making the building any larger?

With the reopening of I.M. Pei’s modern East Building, the National Gallery of Art (NGA) is celebrating its 75th anniversary with a freshness and energy that marks a dazzling rebirth of Washington’s flagship art museum.

“To me, it’s a new National Gallery of Art,” said Director Earl A. “Rusty” Powell III. “It’s a much different collection than when we opened. It’s a milestone moment in the history of the National Gallery.”

Pei’s iconic building, with its dramatic angles and sleek lines, has been updated with subtle additions that emphasize the ­artwork. Wanting to keep a continuation in design, the NGA reached out to Pei when discussions of the East Building’s renovation started. Pei recommended a former colleague, Perry I. Chin, for the job.

In 1948, Pei was recruited by New York real estate magnate William Zeckendorf. There he spent seven years before establishing his own independent design firm I. M. Pei & Associates in 1955, which became I. M. Pei & Partners in 1966 and later in 1989 became Pei Cobb Freed & Partners. Pei retired from full-time practice in 1990. Since then, he has taken on work as an architectural consultant primarily from his sons’ architectural firm Pei Partnership Architects.

His first major recognition came with the National Center for Atmospheric Research in Colorado; his new stature led to his selection as chief architect for the John F. Kennedy Library in Massachusetts. He went on to design Dallas City Hall.

He returned to China for the first time in 1975 to design a hotel at Fragrant Hills, and designed Bank of China Tower in Hong Kong fifteen years later. In the early 1980s, Pei was the focus of controversy when he designed a glass-and-steel pyramid for the Musée du Louvre in Paris. He later returned to the world of the arts by designing the Morton H. Meyerson Symphony Center in Dallas, the Miho Museum in Japan, the Suzhou Museum in Suzhou, and the Museum of Islamic Art in Qatar.

Pei has won a wide variety of prizes and awards in the field of architecture, including the AIA Gold Medal in 1979, the first Praemium Imperiale for Architecture in 1989, and the Lifetime Achievement Award from the Cooper-Hewitt, National Design Museum in 2003. In 1983, he won the Pritzker Prize, sometimes called the Nobel Prize of architecture. 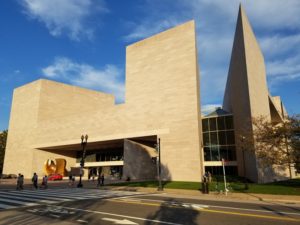 Chin undertook the monumental task of concept architect to expand the building while honoring Pei’s original design and footprint. He took advantage of unused space in the gallery, opening up towers one and two and adding floors to each, creating much of the 12,250 square feet of new exhibition space. A terrace connecting the two towers completed the space, allowing for an outdoor sculpture garden that overlooks Pennsylvania Avenue.

The three-year, $69 million renovation allowed museum officials to dramatically reimagine the way they display their modern and contemporary collection, which has grown dramatically since 1978, when the Pei building first opened.