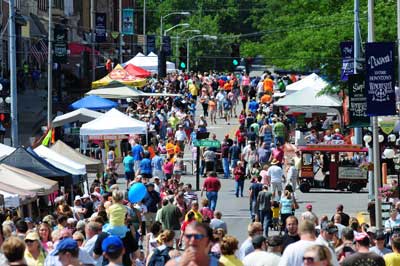 The Kentucky Main Street Program (KYMS) recently announced that 39 participating communities reported cumulative investment of $109,741,515 in their commercial downtown districts in 2016, a number that includes $75,070,029 of private investment matched by $30,920,494 in public improvements.

This total was up significantly from the $76 million of cumulative investment reported by 44 communities in 2015.

Administered by the Kentucky Heritage Council/State Historic Preservation Office (KHC), Kentucky Main Street is the oldest statewide downtown economic revitalization program in the nation, based on the National Main Street Center (NMSC) Four-Point Approach® emphasizing organization, promotion, design and economic vitality. Since the program’s inception in 1979, KYMS can document more than $3.9 billion of public-private investment throughout the Commonwealth. 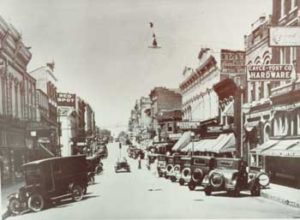 The revitalization statistics were announced during the KYMS Winter Meeting on February 15-16, 2017 in Frankfort, which began with an advocacy day at the Capitol, where local directors displayed exhibits about their programs and met with legislators.

The day concluded with both House and Senate floor resolutions, introduced by Rep. Chad McCoy of Bardstown and Sen. Robin Webb of Grayson, respectively, which were adopted in each chamber by voice vote. Pictured here are the directors gathered with Sen. Webb (front row, 3rd from right) on the floor of the Senate chamber

According to the resolutions, “Kentucky Main Street is at its core a self-help program, locally administered and funded through private investment partnered with public support, which achieves success by addressing a variety of issues that face traditional business districts and re-establishing downtown as the community’s focal point and center of activity.”

Affiliate programs have met at least five of the 10 accreditation standards, and Network programs are those in the beginning phases of the program or in some form of transition. Those earning Affiliate status are Marion, Paintsville, Scottsville, and the Tri-Cities program including Benham, Cumberland and Lynch; and Network programs are Dayton, Middlesboro, Nicholasville and Wayland. Annual reinvestment statistics are collected from all participating Accredited, Affiliate and Network communities.

“The economic and community impact of the Kentucky Main Street Program has been particularly dramatic in rural and small towns across the Commonwealth,” said Regina Stivers, Deputy Secretary of the Cabinet of Tourism, Arts and Heritage. “By helping preserve historic resources unique to each community, focusing on small businesses, and creating a halo effect that encourages additional investment, the program supports the cabinet’s mission of improving quality of life and enhancing opportunities for heritage tourism.”

Kentucky Main Street’s mission is to prioritize the preservation and adaptive reuse of historic buildings as the framework supporting downtown revitalization and economic development strategies. Participation requires local commitment and financial support, with a Main Street director to administer the program in partnership with a volunteer board. In turn, KHC provides technical and design assistance, training and educational opportunities, on-site visits, a resource center, national consultants and grant funding, when available.