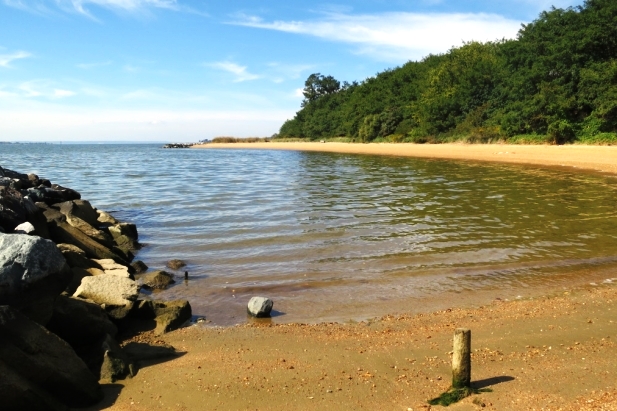 Some six decades ago, oysters in Breton Bay—tributary of the Potomac River near Leonardtown, Maryland—were so plentiful that you had to be careful where you set foot on the bottom.

Today, as with most of the Chesapeake Bay, oysters are scarce in Breton Bay.

But the bivalves may soon return to this pretty estuary if a proposal by the Maryland Department of Natural Resources comes to fruition. State officials have nominated Breton Bay for an ambitious oyster reef restoration initiative.

This makes the folks in Friends of St. Clements Bay—a recently formed non-profit group—very happy. But also a bit surprised, as most folks expected the state to choose an easier (read: healthier) site.

Friends of St Clements Bay is a community of neighbors working to preserve and restore their watersheds to their previous glory. They organize clean up days, tree plantings, educational events, school partnerships and a campaign to bring oysters back to Breton Bay.​

Fred Millhiser, a leader of the group, sees oysters as a keystone species that clean the bay’s water and revitalize its ecological health. He says that restoration shouldn’t be reserved just for the Chesapeake tributaries that are healthier than Breton Bay.

“These aren’t just [shellfish],” said Millhiser “These are habitat for 300 different kinds of plants and animals that live and thrive around a healthy oyster reef.”

He acknowledges that Breton Bay may not look as attractive for restoration as some other tributaries. But he sees hopeful signs, such as the recent $22 million enhanced nutrient removal upgrade to Leonardtown’s wastewater treatment plant.

They’re now talking with the town about building a small demonstration oyster reef at the Leonardtown Wharf. Mayor Dan Burris said he sees the project as an opportunity to educate the public about the town’s seafood heritage and the importance of oysters.

For Liz Curtz, one of the founders of Friends of St. Clements Bay, it’s just one of many ways she and her neighbors are working to bring the bay back. “A year ago, it was not in anybody’s wildest dreams that Breton Bay would be named as one of the restoration tributaries,” Curtz said. “This is going to be a little bit of an uphill push…But it’s a push worth making.”

The announcement about Breton Bay’s selection came as part of the Maryland Department of Natural Resources comprehensive plan for oyster restoration, wich was announced on December 15, 2017. At that time, they signaled their intention to recommend Breton Bay and the upper St. Mary’s River as the fourth and fifth tributaries to satisfy the state’s commitment to the Chesapeake Bay Watershed Agreement goal of restoring native oyster habitat and populations in five tributaries by 2025. But many thought they wouldn’t actually follow through after looking at the water quality more closely,

But they were wrong. The DNR says the selection complements ongoing large-scale oyster restoration activities in Harris Creek, the Little Choptank River and the Tred Avon River.

“Maryland is committed to restoring the oyster population throughout the Chesapeake Bay for both ecological and economic reasons,” Natural Resources Secretary Mark Belton said. “This keystone species builds the foundation of a healthy marine ecosystem, cleaning and filtering water, while also serving as the backbone of our fisheries-based economy, be it aquaculture or commercial harvesting.”

The recommendations will be shared with the Maryland Oyster Restoration Interagency Workgroup, which includes the National Oceanic and Atmospheric Administration and U.S. Army Corps of Engineers. The department will also gather input from citizens, communities and stakeholders in an open and transparent public comment process.

Breton Bay intends to be restored with the assistance of the state’s federal partners while work in the upper section of the St. Mary’s River would be conducted by the state. All contracts for seed planting and substrate placement in the final two restoration sites will be competitively bid.

“These restoration recommendations strike the right balance between the environment and the economy by concentrating limited yet targeted resources on existing sanctuaries with the most potential for success, based on the best available science,” Belton said. “These two sites have the broad support of environmentalists and riverkeepers as well as county leaders and watermen.”

Along with its restoration selections, the state also plans to study and survey existing state oyster sanctuaries around Annapolis and the Lower Eastern Shore. For the first time, the department will design and develop oyster management plans for the Manokin, Nanticoke and Severn rivers to determine how the strategic use of state investment and resources, including seed, shell and spat, could spur natural oyster growth and reproduction.

See article by Timothy B. Wheeler in the Bay Journal.