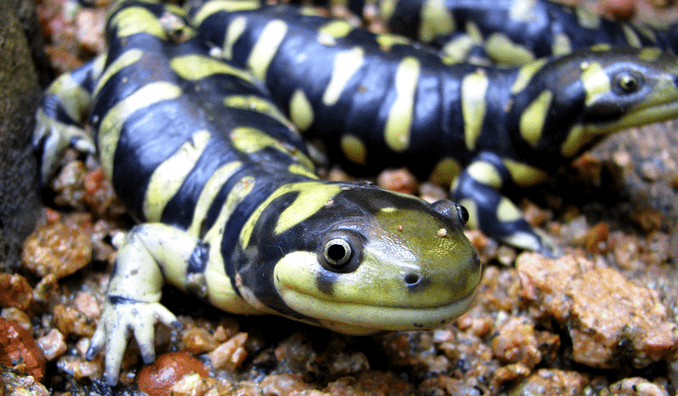 In Maryland, biologists at the state’s Department of Natural Resources are reporting a dramatic increase in the reproducing population of the tiger salamander—the largest terrestrial salamander in the U.S.—in the department’s spring 2020 surveys.

“They are having a great year and it’s great to see them concentrated in the areas where we have restored the natural wetlands they need to survive,” department biologist Scott Smith said. 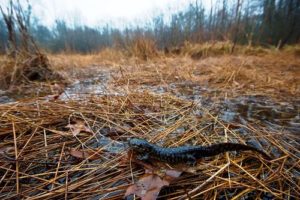 However, most of these singular wetlands have been altered and no longer provide habitat for the many rare plant and animal species they once supported.

Tiger salamanders spend most of their lives underground, with the exception of the breeding season when they journey to these small, fishless freshwater ponds to mate (fishless because fish eat their eggs).

Declines in tiger salamander populations are largely due to the loss of Delmarva bays and surrounding forests.

The Maryland Department of Natural Resources has been working for years to reverse this trend and restore these wetlands, and the tiger salamanders are taking notice.

Biologists are restoring Delmarva bays on both state and private land by returning their hydrology and vegetation to their natural conditions. 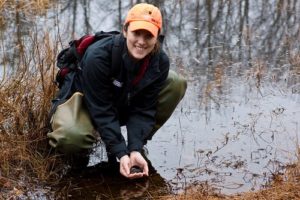 Through years of intensive restoration and management efforts, bays that were previously dark and overgrown are now open, sunny, and full of tiger salamander egg masses.

“It’s great to see them having such a great year,” biologist Beth Schlimm said.

“They are really responding well to their restored habitat. If they keep this up, one day we hope to declare them recovered and take them off the endangered species list,” she added.

As adults, tiger salamanders can grow to more than a foot long.

Featured photo of tiger salamanders is by Carla Isabel Ribeiro via Wikipedia.