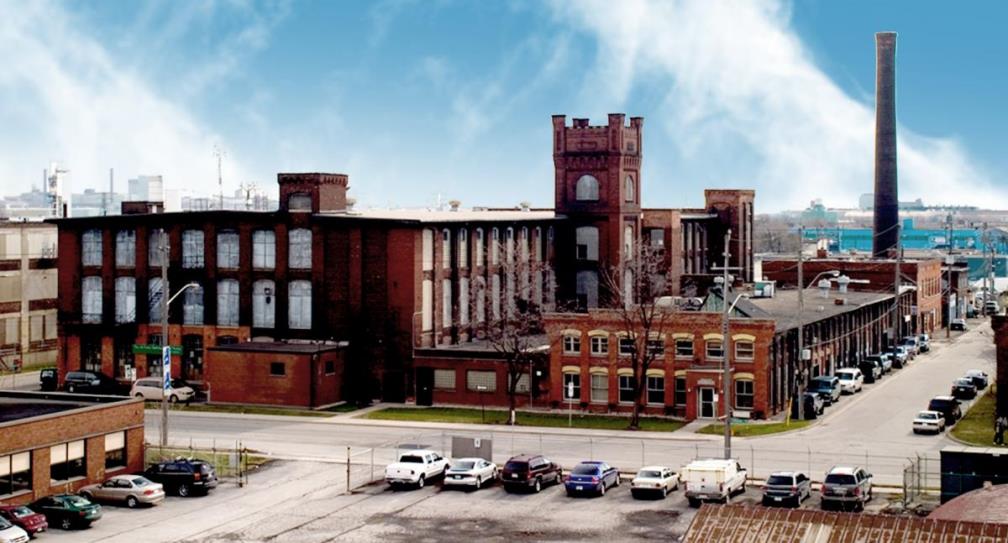 The folks in Hamilton, Ontario, Canada often talk about the building boom that has been going on in recent years, but The Cotton Factory is something else again — a virtual one-building building boom.

Scratch that. The Cotton Factory is actually six buildings, not just one; a colony of five annexes or outbuildings (dye building, mill building, etc.) clustered around the biggie, which tends to monopolize the eyes in a first look. 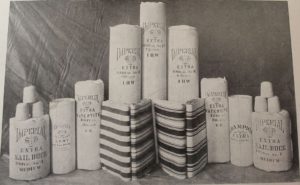 Most people who know Hamilton, or have even just driven by on the QEW–think of it as a steel town. That’s certainly true, but there was a softer side to its early economy, too: cotton.

Physical evidence of this is found at the Cotton Factory, a historic industrial complex formerly known as The Imperial Cotton Company Limited in the industrial north end of the city. The complex has now been renamed The Cotton Factory, and has repurposed for small manufacturing and office space for creative professionals.

The five buildings on the site were built in 1900 and today are unaltered, structurally. It is one of the few historic complexes built in Hamilton the late 19th to early 20th century that remain today.

The Cotton Factory is now a prime example of adaptive reuse. It has been transformed into a creative industries complex, with space for workshops, galleries, office space for creative professionals, and studios for artists. Photographers and special events are also drawn to the building by its unique aesthetic and its historic charm.

And The Cotton Factory’s restoration — what owner Rob Zeidler prefers to call “adaptive reuse” — symbolizes a Hamilton in which old building stock is valued and protected. Not just as functional space but as “environment”; something that attracts people to the city and helps keep it architecturally oxygenated, so to speak, the past being vital to the future.

Rob Zeidler bought the building(s) in 2014 for just under $5 million. What he and his team have done in the three years since the purchase is astounding. Room by room, hall by hall, detail by detail, The Cotton Factory is being rejuvenated (or perhaps we should say re-aged), such is Rob’s commitment to restoring over replacing.

This almost didn’t happen. When it was up for sale, says Rob, “they were looking at the possibility that it (would make more financial sense) to demolish the place and sell the wooden beams, when you worked out the numbers.”

But Rob found the magic price. “It was absolutely hand-wringing. What did I get myself into? But it’s been so successful. It’s 95 per cent full.”

Over 60 tenants currently call the facilities of The Cotton Factory home for their artistic or creative practice. Among them are designers, curators, painters, potters, textile artists and woodworkers. Areas of the building have also been used for a wide variety of television and movie productions.

The complex of buildings that remain at The Cotton Factory form one of the most complete historic textile mill complexes remaining in Canada. Built with brick and wood in the “slow burning” method, the three-story mill building, with its prominent tower, housed most of the original machinery. The architectural style of its tower suggests a gothic influence and it was designed to compete with other architects of the day. Adjacent structures were used for sorting, painting, finishing, shipping waterproofing, and warehousing. The tall smoke stack was used by the original 3 boilers.

“We want to create a critical mass of the arts in Hamilton,” explains Zeidler. His vision was to create a community hub, hosting conferences, live performances, and exhibitions that engage the population at large. “We want to be a city within a vibrant city.”

Zeidler has seen firsthand how a flourishing arts scene can revitalize a neighbourhood; his sister was the driving force behind Toronto’s Gladstone Hotel, one of two historic buildings reinvented as funky hotspots that anchor the now-thriving art and design district of West Queen West. “It’s like having a hundred little fires going. If you get critical mass, they feed each other,” Zeidler says.

A similar transformation is taking place on Hamilton’s James Street North, where boarded-up storefronts have been filled in recent years, first with galleries and studios, then with vintage clothing stores, coffee shops and restaurant, all of which stay open late during the street’s wildly popular monthly “Art Crawls.”

During the late 19th to early 20th century, Hamilton’s textile production was one of the city’s largest industries, second only to the steel mills. The “5 Johns” of Hamilton (Gibson, Moodie, Sutherland, Dickenson and Patterson) were the ones responsible for this “Industrial Age” here. They opened the Cataract Power Company in 1896 which brought cheap electricity to the city, and they were Hamilton’s major land-owners in the region, both of which brought manufactures and entrepreneurs from all over North America.

A bookkeeper from a Yarmouth, Nova Scotia cotton duck mill came to Hamilton in 1887 to open up a rival company here. He approached John Patterson to fund his cotton mill venture. Patterson already owned the land, and it was decided that his brother Edmond Patterson would be the architect. The Imperial Cotton Company was born in 1900 and a man named James M. Young, became the first President (and is a now distant relative of Robert Young, the current owner of the Hamilton Tiger Cats). 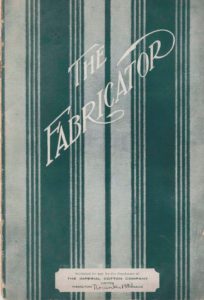 The Imperial Cotton Company treated their employees to a quarterly magazine, “The Fabricator”, from 1921 to 1925. The magazine brought news of such things as a group insurance plan, a new 165-seat cafeteria with hot meals and electric refrigeration, and the purchase of a new lunch-room piano by the Entertainment Committee, among other things. The newsletter also listed community news such as the marriages, births, deaths, and vacations of mill employees.

By 1906 orders were taken from all over the world using telegraphic code, and Imperial Cotton created its own code-book to simplify orders. Classes of duck manufactured were: once and sail; harvester and hydraulic; hose, bootleg and tennis; and filter and press. Today, economic activity has returned to the buildings after a long absence; many would say in a better form.

Note from Storm: When I keynoted Hamilton’s annual Economic Summit (sponsored by the Hamilton Chamber of Commerce) back in 2008, I told the audience that I had long believed that Hamilton had the most revitalization potential of any city in Canada. I firmly believed that then, and still do. The Cotton Factory is a great example of old assets and present-day needs coming together to create a vibrant, resilient future.

Our thanks to former Norfolk County, Ontario Mayor Dennis Travale for bringing this project to our attention.

2012 photo courtesy of The Cotton Factory.