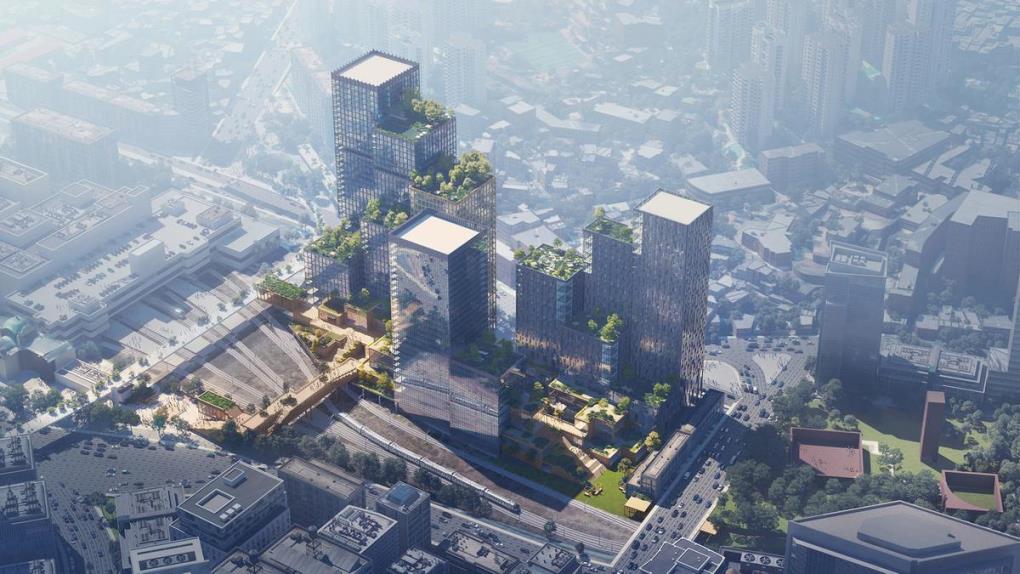 The architects at Copenhagen-based Henning Larsen have been named the winners of Seoul Valley, a mixed-use urban redevelopment on the northern border of Yongsan-Gu, one of Seoul, South Korea’s central districts. 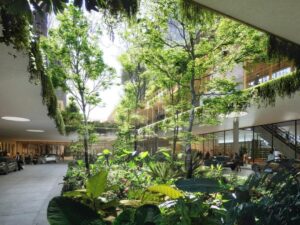 “For well over a decade the city has been actively working to revitalize its urban fabric, focusing on the spaces between buildings and the pedestrian links. Seoul Valley fits into that vision, promising to bring public life back to the center not just through shops and amenities but through a design that focuses on public comfort, greenery, and local tradition,” he added.

Ringed by mountains and characterized by a patchwork of hills and valleys, the geography of Seoul is largely uneven, save for a spine of level ground that runs through the city’s north-south axis. 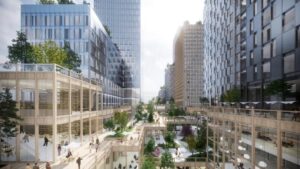 Seoul Valley is located in the flat center, sandwiched between the sprawling rail yards of Seoul Station and an 8- lane freeway leading to the city’s central Jung-gu District. Though centrally-located, infrastructural barriers have long isolated the long-empty 28,600 m² site from its surroundings.

Seoul Valley merges the outsized scale of the city with the small scale of traditional Korean “hanok structures”, its three-pronged profile on the skyline fragmenting into numerous smaller masses as it descends.

The “ground” level is, in fact, spread over multiple, with gardens, terraces, and courtyards defining the spaces in between the structures. This meandering public path is framed on either side by shops, boutiques, and showrooms, in addition to workshops and studios. 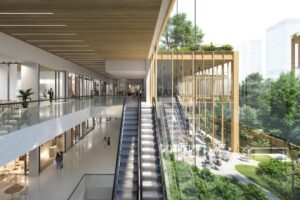 The office and hotel towers cluster around this leafy core, protecting pedestrians from wind, pollution, and urban noise. Plants are specifically chosen and arranged in overlapping layers to create a protected and appealing environment.

The Biospheric Layer, which acts as a filtration boundary to mitigate pollution; the Percolation Layer, in which dense plantings block noise and form a lush green interior; and the Conscious Layer, which is geared towards stimulating the senses.

Seoul Valley employs an “inside out” retail scheme that prioritizes visitor experience over sheer commercial frontage. Rather than create maze-like double loaded corridors, retail modules are dispersed independently throughout the site. 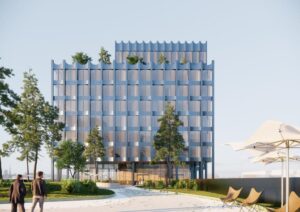 “As an industry, we’ve known for a long time the benefits of daylight, exterior views, greenery…but such benefits are often pushed to the side in favor of maximizing frontage in commercial design,” explains Kurek.

“Shopping in the future won’t necessarily be about coming out of the shop with a bag, so our goal with Seoul Valley was to have both. In the end, we believe the whole is more than the sum of its parts,” he concluded.

This, in combination with the comfortable microclimate within Seoul Valley, creates a free-flowing, ever-changing retail offering that encourages lingering and exploration. Even basement level retail and commercial offer (such as the hotel’s automobile entrance) has access to sunlight and lush greenery.

All renderings are courtesy of Henning Larsen.