The coastal city of Matosinhos, Portugal–8th most populated municipality in the country. It’s bordered in the south by the famed city of Porto. The population of Matosinhos is about 176,000, and it covers an area of approximately 62.42 square kilometres (24.10 sq mi).

The oldest vestige of human settlement in this territory extends back thousands of years, and include instruments and Paleolithic artifacts, collected along the old beaches (specifically Boa Nova and Almeiriga).

The settlement of the land began sometime 5000 years ago, during the Neolithic

A bit more recently–just a few years ago, in fact–Matosinhos had a problem: their port was badly in need of revitalization.

Their historic port, the Port of Leixões–founded in 1892–is the largest in the north of Portugal, and is one of the most important in the country. Leixões has excellent road, rail and maritime infrastructure, and is equipped with advanced information systems for vessel traffic control and management.

Despite their strategic location and good infrastructure, both the port and the city lacked attractive amenities for the cruise ship passengers. As a result, they usually ignored the city went straight to nearby Porto and other regional attractions. 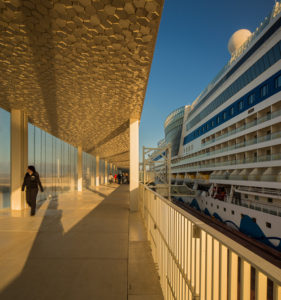 The port’s managers, Administração dos Portos do Douro e Leixões, determined that a new cruise terminal was the solution.

It would be supplemented by projects to beautify the city, regenerate its commercial infrastructure and restaurants, and create cultural facilities and urban services for residents of deprived neighborhoods. Total investment: about 50 million euros.

Since Porto is the city most tourists know, they named the new facility the Porto Cruise Terminal.

It opened on July 23, 2015, and its attractive design, combined with reconnecting the port with various areas of the city, has greatly contributed to the economic and social resurgence. 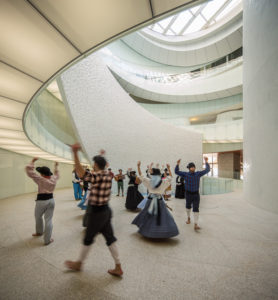 Porto Cruise Terminal is a small (appropriately-sized) port complex at the South jetty of Matosinhos.

It now constitutes a node heading in three directions: the new cruise ship quay, the new marina, and the new street linking to the city. 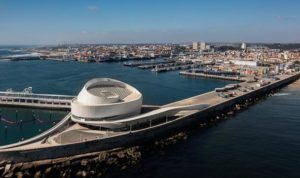 The building is not very large, especially when compared with the huge cruise ships it shelters. From the beach side, few even realize that it’s within the commercial Leixões port. It faces the jetty, not revealing any openings, so it presents a rather mysterious blind façade.

The project that won the 2017 Building of the Year Awards in the “Public Architecture” category.