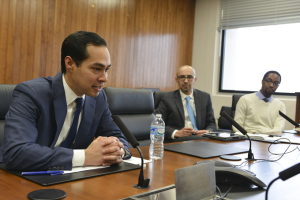 After making his welcome announcement Friday morning that Detroit will be receiving an $8.9 million allocation to help the city become better prepared for future floods and other natural disasters, U.S. Department of Housing and Urban Development (HUD) Secretary Julián Castro (pictured above) paid a visit to the Green Garage in Midtown to further discuss ideas with a small, handpicked group of community leaders for how to make Detroit, Michigan more energy efficient in a way that will best benefit lower income residents, both in terms of cost savings and in terms of health benefits as well.

The funds were in direct response to the brutal storm that battered Detroit one year ago this month that drenched more than 60,000 Detroit homes and caused an estimated $630 million in damage.The storm also caused more than 10 billion gallons of combined sewer overflow, with 6 billion gallons of the flow coming from Detroit’s system, which serves more than 70 southeastern Michigan communities.

According to the Detroit News, “The plan diverts storm water from the city’s aging sewer system, which can quickly become overwhelmed during severe weather. ‘That’s what green infrastructure is all about,’ Mayor Mike Duggan said. ‘Detroit is going to be a national leader in using our vacant land in a way that is both beautiful and environmentally sensitive.’”

Detroit represents part of a broader attempt to connect the President’s strategy to the ground level by soliciting cooperation and buy-in from communities that stand to benefit the most from his proposals.