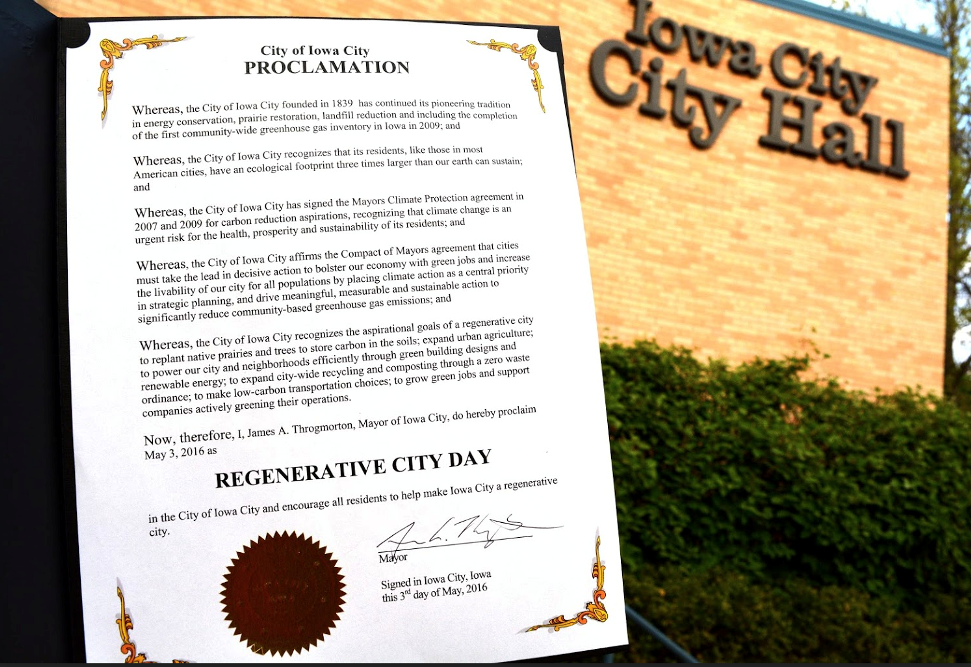 Could Iowa City, Iowa one day join Copenhagen, Vancouver, Amsterdam, San Francisco, and other climate action champions as one of the greenest cities in the world?

The breakthrough proclamation affirms that the city “must take decisive action” to “significantly reduce community-based greenhouse gas emissions,” and recognizes the goals of a “regenerative city“ to “replant native prairies and trees to store carbon in the soils; expand urban agriculture; to power our city and neighborhoods efficiently through green building designs and renewable energy; to expand city-wide recycling and composting through a zero waste ordinance; to make low-carbon transportation choices; to grow green jobs and support companies actively greening their operations.”

Other Ecopolis forums on regenerative city initiatives have included discussions for a major overhaul of urban farm and food policies, the development of public orchards and regenerative agriculture, a commitment to pesticide-free parks and public spaces, and a soil carbon sequestration initiative through a major tree planting and native prairie restoration campaign.

Ecopolis is the design for a regenerative city, rethinking the ways we live and get around, our sense of place, nature and the changing realities of climate, social inequities and our imported sources of food, energy and waste in a growing age of uncertainty. “Ecopolis Iowa City” is a timely challenge to creative cities like Iowa City to take the lead in restoration, biodiversity, local food, inclusionary and just urban designs, renewable energy and transportation initiatives that positively enhance rather than undermine our environment.