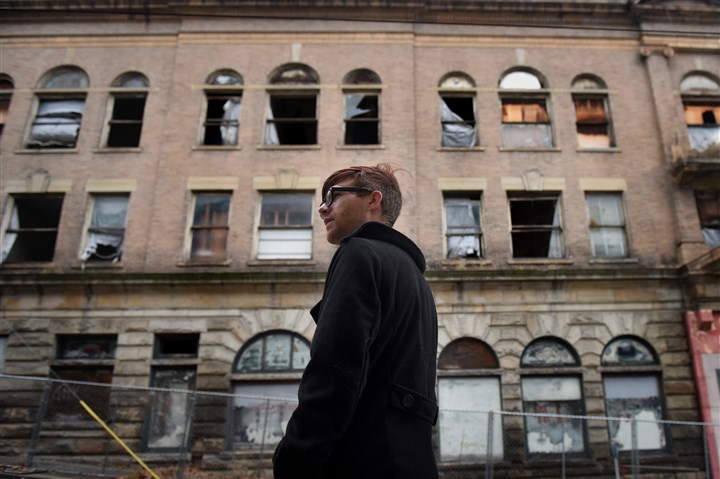 The former Monessen Savings & Trust at 500 Donner Ave. will end its 110th year with plastic blowing like tattered flags from open windows, loose plywood on the ones that are covered and scraggly foliage waving from the balconies.

A demolition notice in the window of one of the last grand buildings in this Monongahela River city is not deterring Matthew Shorraw. The 24-year-old part-time band director and native son has a vision of its future.

He will have a huge task turning the Beaux Arts-style building into a music and arts center, starting with $70,000 in liens. He wants to get the liens waived, buy the building from the city and begin amassing investors. He has already submitted his plan, the 500 Donner Project, to foundations for grants.

After crunching the numbers as best he can, he figures a renovation would cost about $8 million.

Preservation is challenge enough in Pittsburgh, but in small cities such as Monessen, down from a population high of 28,000 before 1940 to 7,700 today, so many historic bones that could be building blocks for the future are crumbling, taking evidence of a strong past with them.

Placing the savings and trust on its 2015 Top Ten list of places ripe for intervention, the Young Preservationists Association of Pittsburgh noted that many towns and cities consider demolition as the first option to reduce blight.

Monessen Mayor Lou Mavrakis agrees with that option. He said there is too much blight to attract the kind of money the city needs to rebuild.

“Monessen has more blighted buildings downtown than all the third-class cities in Westmoreland County combined,” he said, describing the savings and trust as “25 years of pigeon [expletive] and a basement full of water. These people who say, ‘Oh, we’re going to save this grand structure,’ have fancy ideas and no money.”

He said if the entire block was leveled, a developer might be attracted, “but no one will want to invest with all that damn blight.”

“Some people see broken windows and say” — flicking his hand — “ ‘Just tear it down.’ But for the amount you need to tear it down, you could board the windows and work toward a new use. We will never build that kind of building again.”

Note from Storm: It a shame that some people didn’t learn the lesson from the “urban renewal” disaster of the 60s. (It’s even worse when they rise to leadership positions.) “Destroy it and they will come” didn’t work then, and it works even less well now that people are rebelling against the sameness of American cities. Well-built older buildings are often the only chance communities have to establish their downtowns as authentic, interesting,vibrant places. Granted: some buildings aren’t worth saving, but the determination to demolish them should be made very carefully.